On April 15, soldiers brandishing high-powered rifles went to the site of the Mangyan Day activities. Boarding a military truck, the soldiers of the 80th Infantry Battalion of the Philippine Army arrived at around 7 a.m. and never left the premises until late afternoon.

While many of the Mangyans stayed under the makeshift roof made of dried leaves, not a few walked away at the sight of the soldiers.

Five days before the event, Paster Marcelo Carculan, chairman of the Mangyan organization Hanunuo, Alangan, Hanunuo, Gubatnon, Iraya, Buhid, Bangon and Tadyawan (Hagibbat) was asked by the soldiers about the Mangyan Day and was told that they intend to visit the event.

“Some of the soldiers stay at the barangay (village) hall. Out of fear, some Mangyans left their homes and transferred to other places,” Carculan said.

Sometime in 2009, soldiers went to Carculan’s house. He was not there at that time. “My wife and children were so frightened at the sight of soldiers with long firearms.” He sought help from the village captain and went to the village hall to talk to the soldiers. More than a hundred villagers also joined him. 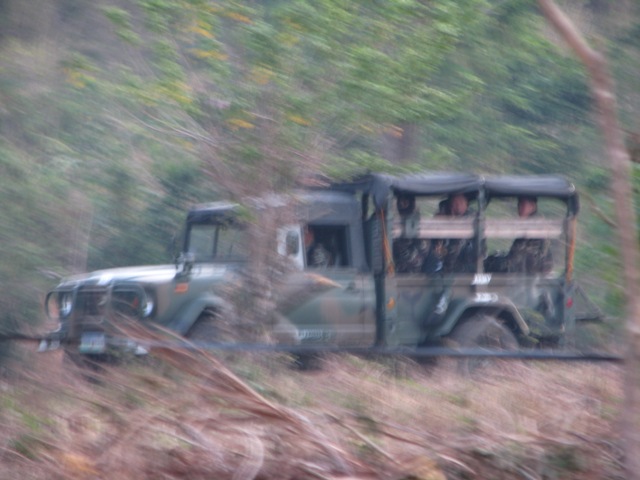 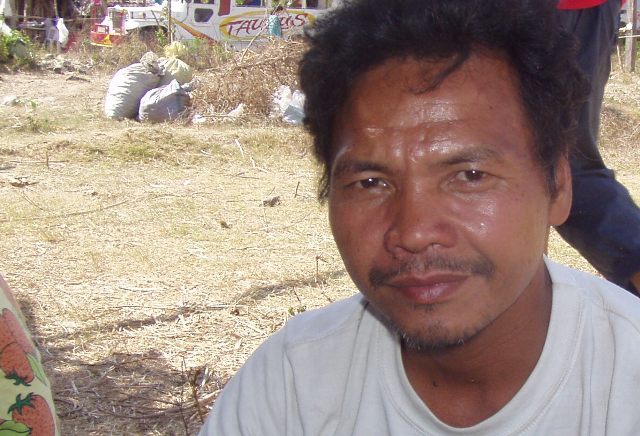 Pastor Marcelo Carculan, chairman of Mangyan federation Hagibbat, has been the target of military harassment.(Photo by Ronalyn V. Olea / bulatlat.com)

“They asked me what is Hagibbat. I told them it is the organization of Mangyans. They asked who organized the group. They warned me against working with leftist organizations. I told them we just want to assert our right to self-determination and to address out problems,” Carculan related.

In another interview, Altang Dawsig, a Bangon-Mangyan from Bongabong, Oriental Mindoro, said they have every reason to fear the presence of the military. He said that during the stint of retired Gen. Jovito Palparan Jr. in Mindoro, the Mangyans experienced grave human rights violations. Even without Palparan, Mangyans are still branded as New People’s Army (NPA) guerillas or supporters.

In Oriental Mindoro alone, Karapatan-Southern Tagalog documented 326 human rights violations involving 1,219 victims at the time Palparan served as commander of the 204th Infantry Division of the Philippine Army from May 2001 to April 2003. This includes the high-profile murder of human rights defender Eden Marcellana and peasant leader Eddie Gumanoy. 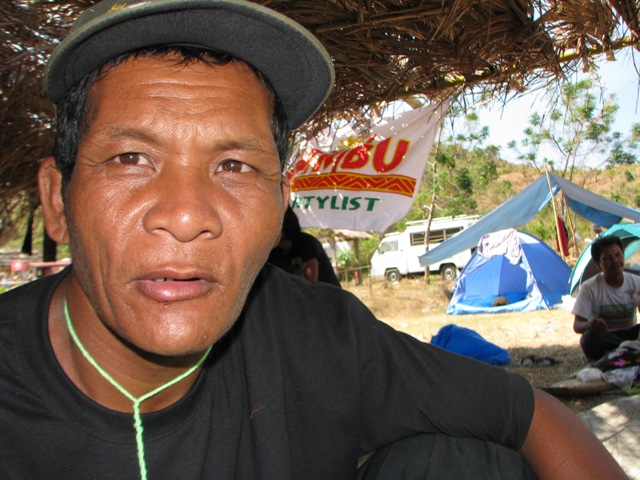 Altang Dawsig shares how he and his fellow tribesmen were harassed by soldiers.(Photo by Ronalyn V. Olea / bulatlat.com)

Although Dawsig could not remember the date, the details of his ordeal remain vivid in his mind. About 60 soldiers, all carrying high-powered rifles, went to his house. He was accused of being a supporter of the NPA.

“They searched the house, confiscated our camera and even the toy-guns,” Dawsig said. When they found nothing, the soldiers then dug the soil to get the firearms allegedly hidden by the NPA. They found none. The soldiers left. Dawsig was not hurt but the trauma remains.

Dawsig then talked about his fellow tribesmen killed by Palparan’s men.

A Bangon-Mangyan was on his way home when he chanced upon a group of men in uniform. The Mangyan named Taliogaw was carrying one-fourth kilo of rice, which he bought from town, when he was confronted by soldiers and asked where he was heading. “He could not understand Tagalog and so, he could not answer them. He was summarily killed,” Dawsig said.

Another Mangyan, whose name is Inonay, went to the mountain to work in the banana plantation. He was carrying a pot, intending to take his lunch there. “He was also killed.”

At one time, Dawsig said the soldiers took six Mangyans to the military camp. “They were handcuffed and blindfolded and were beaten up. We were telling the soldiers that our tribesmen were not NPA but they did not listen. Two were not able to return and remain missing to this day,” he said.

Luz Brozula, director of the Integrated Development Program for Indigenous Peoples (IDPIP) of the United Church of Christ in the Philippines (UCCP)-Southern Luzon Jurisdiction, said there are 38 Mangyans who became victims of enforced disappearances during Palparan’s stint in Mindoro.

Today, even as Palparan has long left Mindoro, Mangyans continue to be harassed by soldiers.

On April 4, soldiers went to the house of Sonny Robles, a Buhid-Mangyan, in Batasan village, San Jose, Occidental Mindoro. “They were asking us if there are NPA guerrillas in the area,” Robles said. The soldiers would stay at the village hall. “They told us they were there to help us, to make friends with us,” Robles said.

But Robles does not believe them. “They would point their guns before asking questions,” he said.

Robles said that in another instance, while they were planting seedlings on the farm, 22 soldiers, all armed with high-powered rifles, went to them and asked them the location of NPA guerrillas. They could not answer the question. The hut on the farm was burned by the soldiers.

Even Ernie Uybad, coordinator of the IDPIP’s informal school in Mansalay, Oriental Mindoro, was not spared from harassment. He said that a week before the Mangyan Day, more than 50 soldiers led by a certain Lt. Ariola went to his house. “Nine of them slept at our house. They told me I should be there whenever they would visit me,” he said.

The presence of armed soldiers frightened Uybad’s wife and three children, the youngest is only one year old.