On the 25th anniversary of the Chernobyl Nuclear Disaster, the Philippine chapter of the International League of Peoples’ Struggles (ILPS) led a program in Quezon City to remind the public of the devastation that can be wrought by nuclear power plants.

The action was part of the Global Day of Action that the ILPS initiated internationally. Other ILPS chapters such as those in the United States, Europe and Japan also held similar programs and symbolic actions.

The ILPS said that Chernobyl happened two decades ago, but the damage it wrought is currently being recreated in Fukushima, Japan after a nuclear reactor of the Fukushima Dai-ichi nuclear plant exploded in the aftermath of a 9.1 earthquake and a 15 foot tsunami last March 11.

In the Philippines, the ILPS chapter was joined by the Kalikasan-People’s Network for the Environment (PNE) and other people’s organizations under the Bagong Alyansang Makabayan (BAYAN). Participants lit incense sticks and candles, and laid white flowers in front of cleverly-painted cardboard made to look like tombstones “engraved” with the three of the worst nuclear disasters in history: the deliberate bombings of Hiroshima and Nagasaki in Japan by the United States government in August 1945; and the Chernobyl Disaster in Ukraine on April 26, 1986.

According to reports, within first two to four months of the bombings in Nagasaki and Hiroshima, the severe effects to 90,000–166,000 people in Hiroshima and 60,000–80,000 in Nagasaki were felt. Half of the number of casualties were killed on the days the bombs fell. 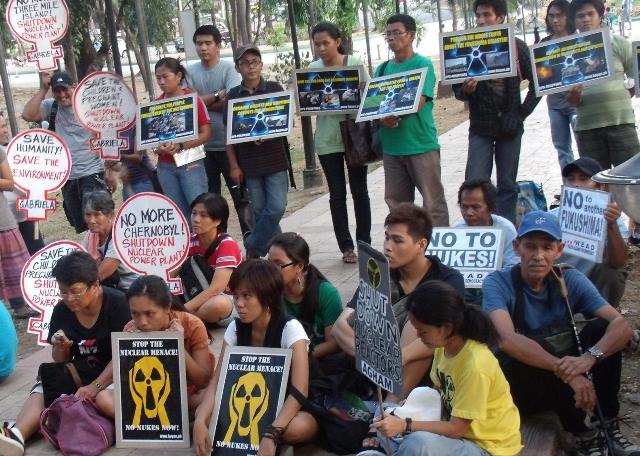 The International League of Peoples Struggles (ILPS) Philippine chapter was joined by Kalikasan-PNE and the Bagong Alyansang Makabayan (BAYAN) in holding a program to commemorate the 25th anniversary of the nuclear Chernobyl disaster and to demand an end to the operations of nuclear reactors all over the world.(Photo by Ina Alleco R. Silverio / bulatlat.com)

Estimates made by the Hiroshima prefectural health department showed that of the people who were killed on the day of the explosion, 60 percent died from flash or flame burns. In the succeeding months, many people died from the effect of burns, radiation sickness, and other injuries, compounded by illness.

The Chernobyl disaster, in the meantime, was the result of sudden power output surge in one of the reactors. When an emergency shutdown was attempted, there was a massive increase in the power output and a reactor vessel ruptured, leading to a series of explosions. A fire exploded sending a plume of highly radioactive smoke fallout into the atmosphere and over the immediate area.

According to reports, the radiation plume drifted over large parts of the western Soviet Union and Europe. From 1986 to 2000, 350,400 people were evacuated and resettled from the most severely contaminated areas of Belarus, Russia, and Ukraine. The radioactive material that was released was said to be 400 times more than the amount released in the Hiroshima bombing.

The disaster, scientists said, released 1/100 to 1/1000 of the total amount of radioactivity released by nuclear weapons testing during the 1950s and 1960s.

ILPS Philippines chairman Rey Claro Casambre read a statement wherein the ILPS registered its strong protests against what it claims is the lack of true and helpful information on what is really happening in Fukushima. The ILPS has said that the Japanese people and the rest of the world need to be constantly and consistently informed regarding the developments in Fukushima and the efforts to stop radiation from the three reactors that exploded from spreading.

Claro said the ILPS is calling for the immediate evacuation of the population threatened by the meltdown in Japan and for the Japanese government to publicly admit the whole truth regarding the Fukushima disaster.

“The ILPS also calls on all international relief organizations to mobilize and conduct extensive evacuations even as efforts continue to supply people with safe uncontaminated food and water,” he said.

Claro also said that ILPS chapters all over the world call on authorities to organize continuous airlifts and shipping convoys for evacuation and deliverynof medicine, food and water supplies.He also said that the ILPS is behind calls for the establishment of an independent commission of the best qualified scientists and experts in the world to investigate the Fukushima accident.

The Japanese chapter of Bayan also released a statement in support of the Global Day of Action. It said that the Japanese government and the private sector of big business groups have downplayed the impact of the Fukushima nuclear disaster to avoid serious backlash on its nuclear energy program.

“They have connived with US monopoly capitalists represented by General Electric (GE) which engineered the six reactors of the damaged nuclear plant to cover up for this massive human and technological error unmindful of the safety and security of the people and its impact on the environment,” it said.

The group went on to state its belief that nuclear power is not the answer to the world’s energy problems and neither is it the solution to the challenge of climate change.

“Even the most structurally-sound nuclear power plant emits large amounts of radioactive wastes that are highly toxic on an extended period of time. This problem remains unresolved to this day and poses serious threats to human health and safety as well as the environment,” it said.

Bayan Japan also expressed condemnation against the fact that nuclear power programs such as those in Japan appropriate the largest share of public funds. It said that these funds could have been utilized to develop safer and more reliable sources of renewable energy or improve social services for the people.

Toxicologist and professor at the University of the Philippines in Manila Dr. Romy Quijano said that it is precisely the lack of sufficient, truthful and accurate information that makes it imperative for the public to demand a stop to the operations of nuclear reactors.

“We cannot afford to be complacent on this matter,and its tragic that we cannot completely trust authorities regarding what is truly happening in Fukushima. There are huge threats against public health and safety, and when we don’t have information, the risks grow. The Philippines is thankfully far from Japan, but if we are not aware of the developments in efforts to stop the reactors from leaking and exploding anew, we might very well be already affected by nuclear fallout,”he said.

As for the Philippines’ trade relations with Japan, Kalikasan national coordinator Clemente Bautista said that these are affected because of the nuclear accident. He said that at the onset, the Benigno Aquino III government should stop the implementation of its end in the Japan-Philippines Economic Partnership Agreement (JPEPA).

“Who will determine if the imports from Japan are safe? We continue to import food and other products from Japan and because of the disaster, some of the products coming in may very well be contaminated with radiation. There are many other irrefutable reasons why the JPEPA should be scrapped, but this is a particularly urgent one,” he said.

The Philippine Senate ratified the treaty on October 8, 2008.