The right to health should be respected, said Dr Julie Caguiat of non-government organization Community Medicine (Commed). But she criticized the Aquino government’s proudly presented universal health care as a “deception”. Caguiat said that what it is saying “is very far from reality,” because while it says it will “help indigents,” its manner of doing that is only lining the pockets of a few. She cited Philhealth for example, which she compared to GSIS, saying “the funds being collected do not benefit the people in need.” She cited as another example the private partners in Aquino’s PPPs.

“Although it has a nice ring to it – the promised improvement of hospital services under Aquino and his PPPs – this is unfortunately nothing but privatization, which only further takes health services away from the people’ reach,” said Caguiat.

Even in Philippine provinces noted for improved public health services, government health and hospital services now come in various schedules of fees, starting at “free” or actually Philhealth-funded for few, select indigent families, followed by different fees for working people, as the World Bank has suggested in “segmenting the market.” The Philhealth funds, by the way, mainly come from paying working people. As such, the Philhealth-funded health programs are actually funded by the working people and not by other taxes being collected by the government.

The health workers also criticized the trickery of Aquino’s supposed “atmosphere of participation in health programs.” According to representatives of CHESTCORE, a community-based health program in the Cordillera, they are being harassed by soldiers who accused them of being sympathetic to the New People’s Army (NPA), just because they try to bring health services to far-flung, underserved areas.

No change under Aquino

Under the presidency of Benigno “Noynoy” Aquino, the old health policies that result in seven people dying without being attended to by health professionals continue, as do the abandonment and export of health workers, because nothing has fundamentally changed, said Sean Vilchez, deputy secretary-general of Health Alliance for Democracy (HEAD), in a speech before health workers at the Mendiola Bridge. He explained that the Philippine economy remains lorded over by a ruling few conglomerates of big landlords and local and foreign capitalists. 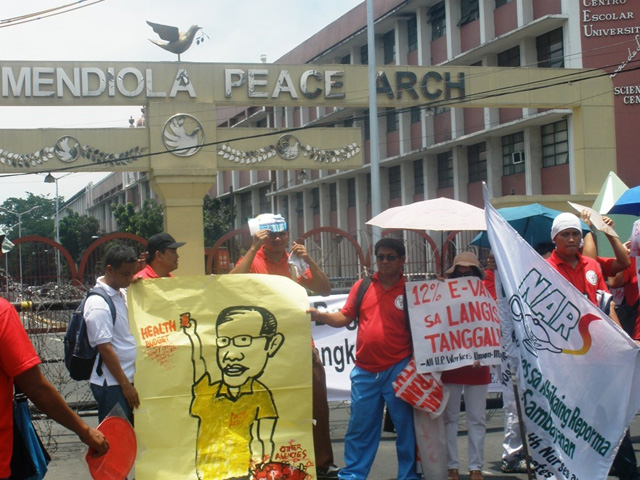 “The ruling few is this cruel,” stressed Vilchez, “because it attacks the people in all fronts.” He said the “number one threat to Filipino health and job security is the US-Aquino Regime,” whose PPPs “result in privatization, in the abandonment of health as a right of the people, and in denying health workers decent wages and jobs.”

In continuing with more mass actions in the future, Vilchez urged the gathered health workers to “link the struggle for decent wages, jobs and democratic rights to the broad struggle of the people for real democracy.” (end)