For two Igorot women, a constant struggle to survive

Sidebar: Imprisoned for refusing to leave their land

Pantabangan, NUEVA ECIJA – In 2004, Mina Golitiw, 52, left Sta. Fe, Nueva Vizcaya to search, literally, for greener pastures. In Sta. Fe, they did not have land to till and survived only by working on other people’s farms. Their search led them to Maluyon subvillage, Fatima village in Pantabangan, Nueva Ecija.

“We pulled out the weeds and started to cultivate the land,” Golitiw said in Ilocano. A mother of six, Golitiw said their lives were better off in Maluyon.

Golitiw’s neighbor in Sta. Fe, Rosita Cosep, 59, was encouraged to move to Maluyon sometime in 2006. Like Golitiw, Cosep started farming. The two Igorot women joined some 30 other Igorot families in Maluyon.

They planted palay, sweet potato, corn, string beans, cayenne pepper and other vegetables and fruits. Most of their produce is for their domestic consumption. They had simple lives until the National Irrigation Administration (NIA) told them to leave the land.

The land is within the Pantabangan dam that is now being privatized. Lopez-controlled energy company First Gen Hydro Power Corp. (FGHPC) obtained control of the Pantabangan multi-purpose dam and hydro-electric power plant in September 2006. In October 2008, First Gen sold the multi-purpose infrastructure to another Lopez-controlled company Energy Development Corporation (EDC) in partnership with California Energy. 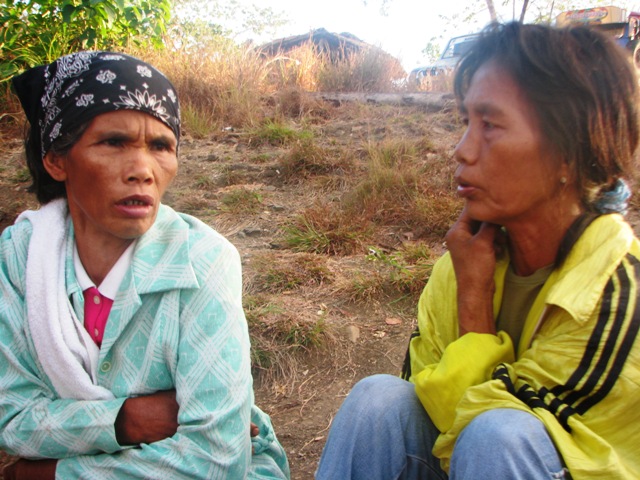 Mina Golitiw (left) and Rosita Cosep (right) share how difficult their lives have been. (Photo by Ronalyn V. Olea / bulatlat.com) 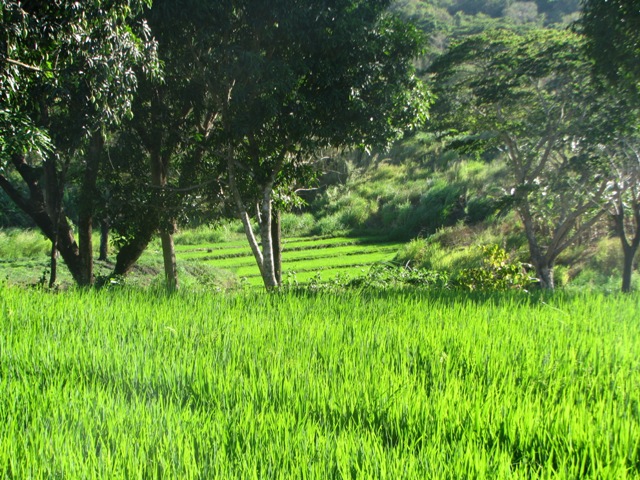 The farm in Maluyon subvillage cultivated by the Igorot community.(Photo by Ronalyn V. Olea / bulatlat.com)

Golitiw said that in 2009, NIA officials called for two meetings and told them to leave the land. “They told us to go away or else, the soldiers would arrest us,” Golitiw said.

The threat became real with the arrest in March this year of Ernesto Bubod, another Igorot farmer, who refused to leave the land.

Golitiw’s family and another one transferred to Maasip subvillage, Tayabon village in San Jose. Even as they live there, their farm in Maluyon remains. Every day, she walks for one hour to work on the farm.

Cosep’s family, meanwhile, opted to stay in Maluyon. “I do not want to leave the farm. There is no steady source of water in Lower Tuli,” she said, referring to the relocation site offered by NIA and EDC to Igorot families.

In either place, there is neither school nor medical clinic for the community. There is no electricity, too. It is only in Maluyon that they have something to eat.

When a group of Igorot families sought the help of the National Commission on Indigenous Peoples (NCIP), they were dismissed, reasoning out that the land is not part of ancestral domain and that the Igorot families have no legal right to stay in the area.

Joan Jaime, national coordinator of Kalipunan ng Katutubong Mamamayan ng Pilipinas (KAMP), condemned the NCIP’s action. “As a government agency established to protect the rights of indigenous peoples, the NCIP should see to it that the rights of Igorot families are not violated.”

“It is the responsibility of the government to provide livelihood for the Igorot families. In the first place, when the calamity struck, the government never lifted a finger to help them,” Jaime said, referring to the 1990 earthquake in Cordillera region that forced many Igorot families to migrate to other provinces.

For Golitiw and Cosep, their survival is a constant struggle.