Solis was fired on September 6, 2010, with RMN citing “loss of trust and confidence and willful disobedience” as bases for his termination. Solis had been with the RMN for 12 years as RMN Davao station manager.

In a decision dated April 18 but was received by Solis’s lawyer May 5, the National Labor Relations Commission Regional Arbitration Branch XI (NLRC XI) ruled that the dismissal of Solis by his employer RMN, Inc. was “unreasonable and unwarranted and thus illegal.”

“I am happy, exceedingly happy about the decision. This is not just about money but our dignity as media workers, our way of sending a message that if we do not fight back, these capitalists can just trample on our rights. I hope that this will motivate media fellows who have also been made victims to stand up to such abuses,” Solis said in the local dialect.

Signed by Labor Arbiter Elmer Ben Pasion, the NLRC ordered RMN, Inc. to “immediately reinstate” Solis to his former position “without loss of seniority rights and be paid back wages” computed from the time he was illegally dismissed. 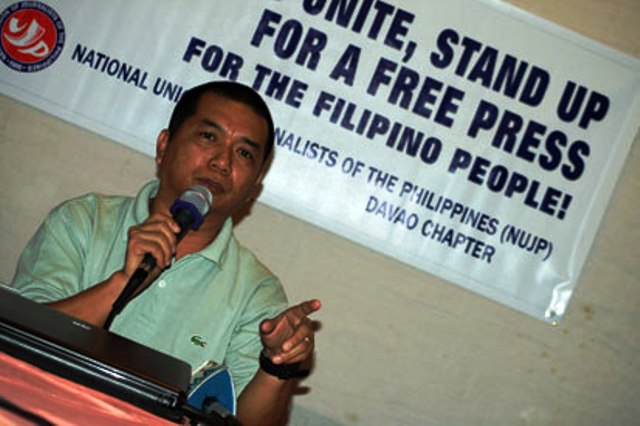 The NLRC ruling also said that the RMN failed to substantiate claims for terminating Solis, citing instead, that these allegations were “premeditated, trumped-up, concocted and were just subterfuge used to hide vengeful designs.”

Solis lodged an illegal dismissal complaint with money claims against RMN Inc., at the NLRC XI on September 23, 2010.

The National Union of Journalists of the Philippines (NUJP) Davao Chapter is jubilant over this victory.

“Our hard struggle for political and economic rights that have been deprived us paid off. This victory of our colleague has shown that through vigilance, our militant united action and a confluence of efforts from various support groups, we can defeat abusive media network employers,” said Jessie Casalda, chairperson of NUJP Davao chapter.

The group viewed the termination of Solis as an action to muzzle him, “in light of the fact that Solis is noted for his progressive stance in his commentaries on air.”

Solis was represented by lawyer Carlos Isagani Zarate of the Union of People’s Lawyers in Mindanao (UPLM). (Ronalyn V. Olea/Bulatlat.com)