You Are Here: Home → 2011 → May → 20 → Lourdes ‘Chit’ Estella-Simbulan, a principled journalist, a compassionate person

“Her compassion for victims was natural. She was consistent in her ethics. She was gentle but had the inner strength. How can you not love such a woman?”

MANILA – The death of Lourdes “Chit” Estella- Simbulan on May 13 shocked many. But the fact that she had touched many lives came as no surprise.

The room at the Arlington Memorial Chapels and Crematory in Quezon City was too small for those who came to pay their tribute to Estella-Simbulan on May 16 and 17. Wreaths overflowed up to the entrance of the chapel. Mourners – relatives, friends, journalists, teachers, students and activists — who could not get in stayed outside, waiting for their turn to pay their last respects to the late journalist.

On Friday, Estella-Simbulan was about to meet her high school friends at a restaurant at the UP Technohub when a passenger bus hit the taxi she was riding. She did not make it to the reunion. She was 53.

“At first glance, she seemed so gentle but she was as solid as a rock when it came to principles,” Roland Simbulan, Chit Estella-Simbulan’s husband, told the audience.

The urn that will keep the ashes of Lourdes Estella-Simbulan and some of the books she had read. (Photo by Ronalyn V. Olea / bulatlat.com)

Estella-Simbulan served as the editor in chief of Pinoy Times, a tabloid known for its hard-hitting stories on former president Joseph Estrada. It featured articles and photos about Estrada’s mansions and profligate ways. The publication closed down in December 2001 due to financial difficulties.

Her husband Roland also related an incident when Estella-Simbulan was given P5,000 by a media liaison of one of the senators after covering a press conference. “She returned it and wrote to the senator. She had no dilemma,” Roland said.

Tirol also praised Estella-Simbulan’s professionalism. “She wants all stories to be submitted on time.”

“We lost an excellent co-worker and friend,” Tirol added.

Before Pinoy Times, Estella-Simbulan worked with the Philippine Daily Inquirer and Manila Times. She also served as former editor of CMFR’s Philippine Journalism Review Reports. Vergel Santos, director of the Center for Media Freedom and Responsibility (CMFR), said that Estella-Simbulan had a special sense of dedication, personal duty and ethics.

Jennifer Santillan, Estella-Simbulan’s friend, recalled their days as students and young reporters. Santillan related how she and Estella-Simbulan, together with some nuns and students, were arrested by policemen during one of the rallies they attended in Manila. They were released after the nuns negotiated with the authorities.

“For the first nine months, they let us write what we wanted. When we became regular employees, we became members of the union and we joined the strike led by the late Tony Nieva,” Santillan said.
“After the strike, our stories were relegated to inside pages,” Santillan recalled. To vent out their frustration, Santillan said they would come up with their lampoon issue titled Tampo.

Estella-Simbulan later taught at the UP College of Mass Communication and co-founded Vera Files.

Long before Estella-Simbulan became a professional journalist, she was a member of the campus press that fought the Marcos dictatorship. It was during this time that Estella-Simbulan and Roland met, when they both wrote for the Philippine Collegian, student publication of UP. 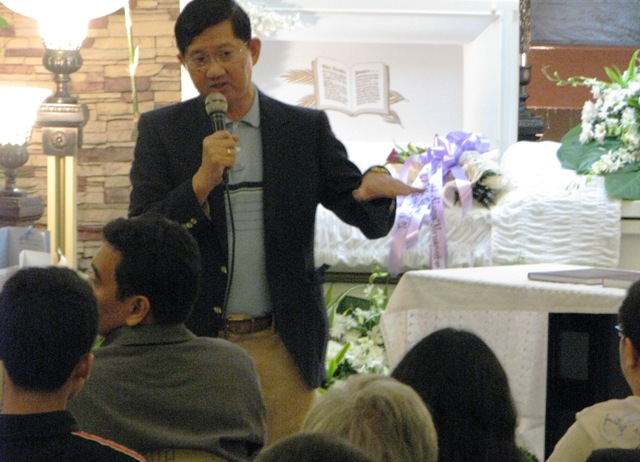 “The year was 1975-1976. Ditto [Abraham III] Sarmiento was the editor in chief of the then newly revived Philippine Collegian. I was appointed associate editor and Chit applied as a news staff,” Simbulan said. “During that time, nothing happened between us though. We were too tense because of the situation,” Simbulan admitted.

“There was no other newspaper that was telling the truth,” Roland said, adding that 8,000 copies, half of the student paper’s total circulation, were distributed outside UP campuses. “The people thirst for the truth,” he said. It is estimated that 20 to a hundred individuals read each copy of the Philippine Collegian.

In January 1976, after the student paper wrote about the La Tondeña strike, the first big strike that challenged martial law, the military raided the office of the Philippine Collegian and arrested most of the editors. Sarmiento’s incarceration worsened his health and led to his death a few days after he was released. Roland managed to elude arrest.

“Due to those tension-filled days, we never paid attention to personal relationships. A semester later, Chit and I became classmates under Dodong Nemenzo’s Modern Political Theories class. We were even seat mates. From that time on, I never let her go,” Roland said, to the amusement of the crowd.

“Her compassion for victims was natural. She was consistent in her ethics. She was gentle but had the inner strength,” Roland said. “How can you not love such a woman?” Roland said.

Roland said Estella-Simbulan was a good editor, admitting that she would proofread even his letters. “She was my best critic and I respected that. She would tell me when something was wrong or needed corrections without making me feel insulted. She said it with grace.”

Roland admitted he has not yet come to terms with her passing. “I know that Chit would continue to live with us.”