Take population control out of HB 4244 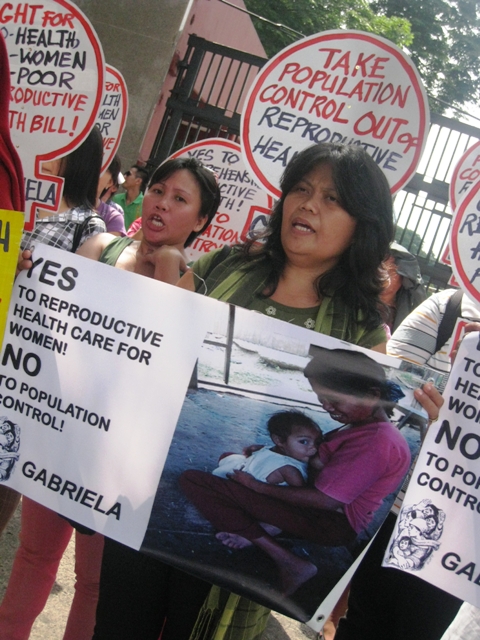 Section 3, Letter (L) of the Guiding Principles stipulates, “The limited resources of the country cannot be suffered to be spread so thinly to service a burgeoning multitude making allocations grossly inadequate and effectively meaningless;”

Section 12, Integration of Responsible Parenthood and Family Planning Component in Anti-Poverty Programs; “A multidimensional approach shall be adopted in the implementation of policies and programs to fight poverty. Towards this end, the Department of Health (DOH) shall endeavor to integrate a responsible parenthood and family planning component into all anti-poverty and other sustainable human development programs of the government…”

Section 25, Letter (I) of the Implementing Mechanisms; “The Commission on Population, as an attached agency of DOH shall serve as the coordinating body in the implementation of this Act…”

In their position paper, GWP said these provisions must be deleted in the RH bill. “Otherwise, the long saga of blaming the population, and specifically the women’s wombs, for the rising poverty in the country continues.”

This wrong notion, GWP added, is being perpetuated while government and big business interests dodge responsibility for the poverty they have caused in this country, and for the ailing Philippine health system that resulted from the government turning its back on it. 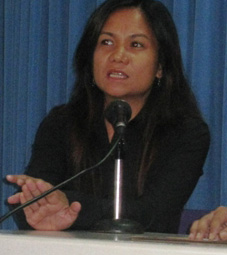 Dr. Geneve Rivera-Reyes, secretary general of the Health Alliance for Democracy, said: “Let us not divert the issue. It is the women’s right to have a better health care especially when she is pregnant.”(Photo by Anne Marxze D.Umil / bulatlat.com)

On the other hand, Gabriela said that a population control agenda that pins the burden of the country’s development on women’s bodies poses a grave threat to the health, rights and welfare of Filipino women. “Masquerading as a poverty alleviation measure, this agenda toes a misguided proposition that a way to end poverty is to control family size. We fear that this myopic and guilt-flogging view will give undue pressure on women to control their reproductive functions and may lead to further violation and sacrifice of women’s health, rights and welfare.”

Gabriela also warned about the possible exploitation of the huge pharmaceuticals and multinationals of the profit potentials in contraceptives. “Because we have a stunted pharmaceutical industry, a Reproductive Health policy anchored on a population control agenda will legitimize the exploits of huge pharmaceuticals and multinationals raring to make super profits without regard to the quality of contraceptives, reproductive health medication and services that will be made available, or worse, imposed on, Filipino women.”

Gabriela also said that a profit-driven delivery of reproductive health medication, supplies and services is an alarming deviation of the government, from its primary role of guaranteeing the people’s welfare, and its responsibility to promote women’s health.

“The women’s right to informed choice must not be imperiled by any designs for population control. State responsibility for healthcare must not be subsumed by private profit especially by big pharmaceutical companies just waiting in the wings,” GWP said.

The GWP said that they will take on the concerns raised by Gabriela and marginalized women and work to convince fellow legislators to revisit provisions of HB 4244 with hopes of removing the population control agenda from the bill.

“As the bill’s co-authors, we will call the attention of our fellow authors to this serious matter and we will definitely bring this to plenary discussions especially during the bill’s period of amendment,” said Rep. Emmi De Jesus.“The RH bill has many positive provisions that may be put to waste if the population control menace continues to overshadow the bill’s essence. As we work to strengthen the appreciation of such good provisions by the public and our fellow legislators, we shall still refuse to make the RH bill a platform for population control,” said Ilagan.

The GWP stressed that RH bill should be;

“Pro-poor to mean that the voice of poor women be recognized, respected and promoted in matters related to reproductive health care. Note that only 25 percent of poor women who give birth are medically assisted unlike 92 percent of upper class women who have professionals attending to them during childbirth. Undeniably, poor women suffer most from maternal deaths.

Rights-based to mean that a woman’s claim to reproductive health be held as a right to survival and non-discrimination and recognized as such by the State. Also, that the crafting of any RH bill should have the participation of women, especially from the majority and the nation’s poor.

Comprehensive to mean that the State has the premier obligation in ensuring women’s full access to health care from womb to tomb. Ergo, reproductive healthcare must not be limited or reduced to contraception alone.”

“All these proclaim, to one and all, that Gabriela Women’s Party views the issue of reproductive healthcare from the perspective of marginalized and disadvantaged women. Hence any attempts by the State, or by any foreign or private interest groups, to put reproductive healthcare under the framework of a population control agenda that principally targets poor women will meet strong resistance,” the GWP said in their position paper.

However, the GWP recognizes that the fight for a comprehensive healthcare for women is still a long haul. “The obstacles can be staggering. But along with the women that it leads and with the increasing support of more and more people, it will not allow the women, especially the poor, to lose out in the end,” GWP said.

“Ultimately it is the women’s organized, collective and determined action especially outside of Congress, plus the support of the general public and the basic masses, that can ensure and guarantee the exercise of women’s rights, reproductive health care included,” GWP said.