The RA 9502 is “so toothless we won’t even demand for its implementation,” said Rivera.

Only five percent of the country’s drug industry is composed of Filipino small businesses in manufacturing and packaging medicines, Rivera estimated. “And always, they are in danger of folding up because of lack of government support,” she added. 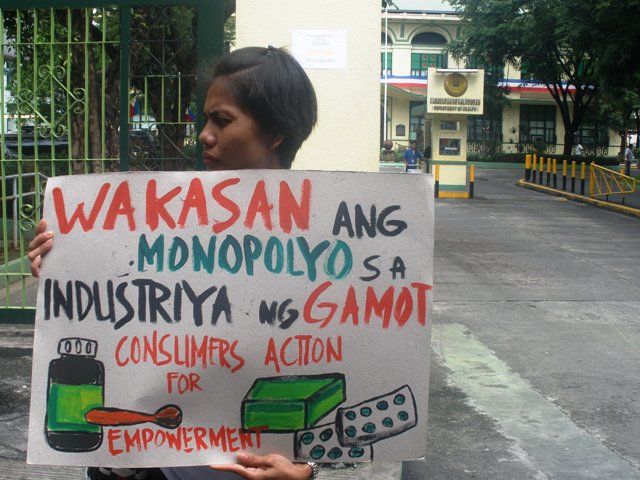 CAE rally at DOH on 3rd anniv of RA9205.(Photo by Marya Salamat / bulatlat.com)

Mr Isaac said in an interview that for local drug companies to achieve a high 50-percent share of the local drug market, “We need to strengthen further our fundamentals. This means continuous improvement in quality, marketing and R&D” (research and development).

While the consumers’ group CAE is demanding price cuts in drugs, among others, in this country known for selling medicines at its most expensive prices in Asia, most pharmaceutical companies would rather the government seek ways to raise the paying capacity of patients, for example through strengthening Philhealth and implementing “universal health care.” This, in a nutshell, only means making the able-bodied, working Filipinos pay for their less healthy and lower-income fellow citizens, via regular payment of increasing social health insurance fees. 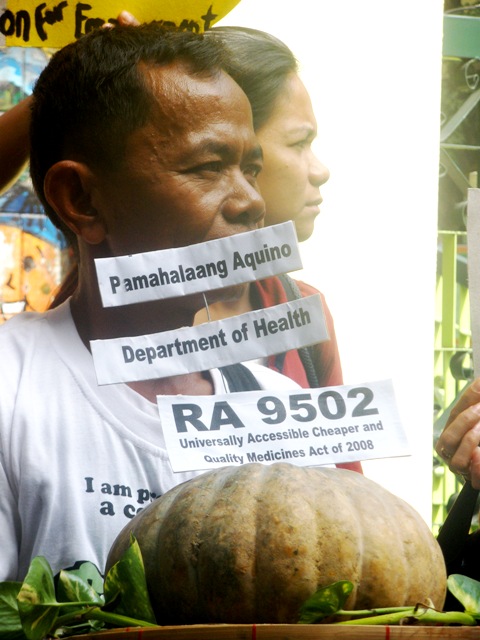 Kalabasa award goes to government & DOH for failing to cut down the price of medicines despite the Cheaper Medicines Law. (Photo by Marya Salamat / bulatlat.com)

The so-called universal health care through Philhealth is still at a very early stage though. The coverage of financial protection according to Philhealth last February hardly reaches five in every one hundred “target population”. As such, amidst calls to lower drug prices, the government under former president Gloria Macapagal-Arroyo tried to look populist a couple of years ago and imposed price cuts in less than 21 essential medicines, in an industry that sells as much as 3,500 pharmaceutical brands.

In the face of imminent price cuts, drug companies under PHAP voluntarily slashed prices of some of their medicines even as they complained of cuts in profits. Meanwhile, the few Filipino drug companies who are mostly into generic or off-patent drugs complained that they were forced also to slash prices, when they were in fact already in the business of selling lower-priced medicines. They seem also to be hurt by the blanket parallel importation of cheaper drugs that had been approved by the government.

At present the Philippines is importing lower-priced generic drugs even if some of these are in direct competition with its nascent generic drug industry, which, incidentally, are being made to operate under stricter European-like requirements. Filipino drug industry leaders have been known to boast that they manufacture generic drugs of superior quality.

The drugs industry is “a very fertile ground for capitalist profits because people will always try to reach for medicines for their loved ones” said Dr Rivera. But for as long as the Philippines remains “hamstrung in policies and agreements of the World Trade Organization (WTO), its government has no sincerity in truly developing its local drugs industry,” said Rivera. She denounced also the persistent lack of funding for local drug research and development.

The consumers’ group CAE reiterated their long-time recommendation of creating a Drug Price Regulatory Board – a salient point of the draft Cheaper Medicines Bill that former Senator Mar Roxas had cut out before approving the bill. CAE said that drug prices could be made lower if such a Board was constituted.

The consumers’ group also demands free medicines to be made available in all public hospitals.

On June 7, the Consumers’ Action for Empowerment together with other people’s health groups said they will march from the University of Sto. Tomas to Mendiola at 9am “to register the people’s discontent over RA 9502 and to raise people’s awareness on the real causes of expensive prices of medicines.”