“By not issuing any decision today, the Supreme Court prolongs the sufferings of farm workers and provides opportunity for the Cojuangco-Aquinos to maneuver.” – Lito Bais, president of the United Luisita Workers Union (Ulwu) said.

MANILA – Farm workers from Hacienda Luisita left their homes at 4 a.m. today to witness the promulgation of the decision of the Supreme Court on the decades-old agrarian dispute.

After hours of waiting, they went home empty-handed as the Supreme Court still did not issue any decision on the legality of the Stock Distribution Option (SDO) scheme in the 6, 453 disputed sugar estate owned by President Benigno S. Aquino III and family. The case has been pending with the high court since 2005 after the Presidential Agrarian Reform Council (PARC) ordered the revocation of the SDO.

The Cojuangco-Aquinos implemented the SDO in 1989, one of the non-land transfer schemes allowed by the Comprehensive Agrarian Reform Law. In lieu of land distribution, corporate shares were distributed to farmer-beneficiaries.

“By not issuing any decision today, the Supreme Court prolongs the sufferings of farm workers and provides opportunity for the Cojuangco-Aquinos to maneuver,” Lito Bais, president of the United Luisita Workers Union (Ulwu) said.

Bais, like most of the farm workers at Hacienda Luisita, have been waiting for decades to gain control of the land. 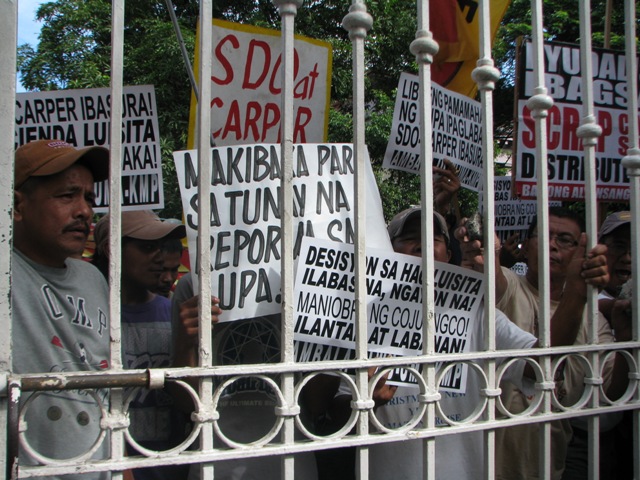 Frustrated, farm workers from Hacienda Luisita and their supporters bang the gates of the Supreme Court.(Photo by Ronalyn V. Olea / bulatlat.com)

In 1967, the Hacienda Luisita should have been distributed to the farm workers had the Cojuangcos complied with the conditions of the loan from the Central Bank. When the Cojuangcos purchased the sugar mill and the Hacienda Luisita land through a loan from the Central Bank in 1957, the loan agreement provided that the land should be distributed to the farmers after ten years.

In 1985, a Manila trial court ordered the distribution of Hacienda Luisita to the farm workers. When Corazon Cojuangco-Aquino became president, the case was dismissed by the Court of Appeals (CA).

In 1989, the Cojuangco-Aquinos initiated a referendum and farmers and farm workers were made to choose between stocks or land.

After the PARC in 2005 revoked the SDO and ordered the distribution of land, the Cojuangco-Aquinos sought a temporary restraining order from the high court and questioned the legal mandate of PARC to issue such a decision.

No to another referendum

Kilusang Magbubukid ng Pilipinas (KMP) secretary general Danilo Ramos said they are “alarmed over information going around agrarian reform advocates that the SC will not decide on the issues raised, particularly the revocation of the SDO, but will favor the proposal of the Cojuangco-Aquinos to conduct another bogus and pro-landlord referendum inside the Hacienda.”

“A failure by the Supreme Court to decide on the substantial issues that would benefit the Cojuangco-Aquinos will not end the decades-old agrarian conflict in Hacienda Luisita and would instead fuel another agrarian unrest,” Ramos said.

“We will not allow another SC ruling that will strengthen the stronghold and control of the Aquino-Cojuangcos on Hacienda Luisita. Farmers, farm workers and their families deserve to get what is rightfully theirs – the hacienda lands that they have tilled for decades,” Anakpawis Rep. Rafael Mariano, also chairman of the KMP, said.

Mariano said the Supreme Court must decide in favor of Hacienda Luisita farmers and prove its worth “as the last bastion of justice in the country” instead of degrading the institution as a lowly “appendage of the Cojuangco-Aquino family and the landlord Aquino administration.”

“We challenge the SC not to give in to the whims of the Cojuangco-Aquinos and finally decide in favor of the farmers and junk the highly oppressive SDO,” Ramos said. “The free distribution of Hacienda Luisita to farm workers is the only just and acceptable solution to the more than half a century old agrarian dispute in the president’s Hacienda.”

For AMGL, whatever decision comes out, the struggle of the farm workers would continue.

Canlas said the present government under Aquino is the biggest obstacle to genuine land reform. “Noynoy Aquino is a hopeless case. The hope for genuine land reform to be implemented by Aquino is futile and his promise of ‘matuwid na daan’ all rubbish, reform lies on the action of the Filipino farmers and exploited sectors,” said Canlas.

Canlas called on the public to support the farmworkers’ ‘bungkalan’ (cultivation) or planting of palay, vegetables and root crops, in Hacienda Luisita. Under SDO, these were prohibited.

Meanwhile, Manila Auxiliary Bishop Broderick Pabillo called on the high court to settle the issue, saying the delay in the issuance of its decision has already raised suspicions that it is being politically influenced.

“We pray that the Supreme Court will uphold its integrity and not compromise itself and offer the poor as collateral damage in the political games being played!” said Pabillo.

Pabillo also called on President Benigno Aquino III not to let the Hacienda Luisita case spoil his administration, just like what it did to the government of his mother, the late and former president Cory Aquino.

Pabillo said agrarian reform had been the centerpiece program of President Cory, but said Hacienda Luisita had been a “glaring taint on her seriousness” to implement it.

Pabillo said the just resolution of the long-standing land dispute will show how serious the is government in helping the poor.