A piece of chalk may cost only a peso, but one piece or two a day will inevitably add up to a big enough amount.

Alliance of Concerned Teachers (ACT) Party-list Representative Antonio Tinio said that many teachers in various school divisions in the country are not receiving their “chalk allowance.”

“Chalk allowance” refers to the amount teachers are given by their schools and by extension, the government to buy chalk for use in the classroom.

Tinio cited Special Provision No. 7 of the Department of Education budget in the General Appropriations Act (GAA) for the Fiscal Year 2011 (Republic Act 10147)which states that a P700 (US$16.28) cash allowance for the purchase of chalks, erasers, forms, and other classroom supplies and materials will be paid classroom teachers every year.

“But we have learned that some of our teachers are not given this allowance, or if they are, the amount is not in full,” he said.

According to the teacher turned lawmaker, a teacher from the Division of Antipolo sent a complaint through the ACT Teachers website saying that teachers in her school have only been given P300 (US$6.98) annually “since time immemorial.” 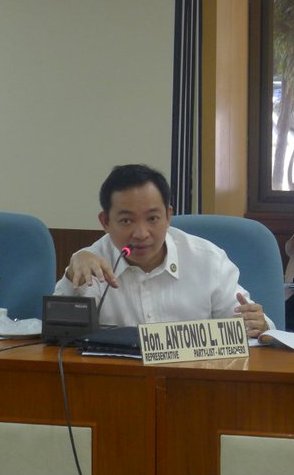 Tinio said that it is precisely unfortunate developments such as this that prompted him to file House Bill 4134, or the “Teaching Supplies Allowance Act of 2011.” The measure seeks to increase the annual allowance for classroom supplies from P700 (US16.28) to P2,000 (US$47)) to ease the economic burdens of public school teachers.

“It’s patently clear that P700 is very small. It’s hardly enough to cover the costs, not only of chalk, but also of other supplies such as erasers, pens, pencils, notebooks, class records, Manila paper, cartolina, bond paper, art paper, and others that are essential for the daily function of teaching and learning in the classroom,” Tinio said.

He said that lawmakers should support House Bill 4134. “After all, it’s supposed that the government has a policy to promote and improve the economic status of teachers and assist them in providing quality education to their students,” he said.

Tinio said that the Department of Education should implement steps to consistently monitor the release of present and previous chalk allowances. The ACT proposal gives the Secretary of Education the task of conducting a periodic review of the Teaching Supplies Allowance, taking into account the current prices of classroom supplies and if warranted, recommend the necessary increase in the amount of the allowance. If the measure is passed into aw, the increased chalk allowance will be included in the Department’s budget proposal for the next fiscal year.

“Teachers should also be vigilant in ensuring that they receive their chalk allowances. If and when they don’t, they can report any irregularities to our office,” Tinio said.

A kindergarten teacher in Justo Lukban Elementary School in Manila said that chalk may be cheap, but the cost piles up through the months.

“I ordinarily wouldn’t mind buying my own chalk occasionally; but teachers can’t be expected to shoulder the cost of, say, a whole box of chalk every three weeks or so for years on end,” said Marnita Lescano.

“So say we use up a box every two weeks or so, we’ll have to spend P23.50 every month. Multiply that by 10 months, that’s P235. That’s only for white chalk. We also often use colored chalk, so the amount is doubled. We’re not even considering the likelier reality that most teachers use up more than one piece of chalk a day,” she said.

Lescano pointed out that there are often cases when teachers are forced to buy their own supplies. “We want to give our students the best, and it really helps if we have more creative ways of teaching them with the use of various props. Sometimes we buy our own colored paper, glitter-glue, water color paints, things like that. Everything comes out of our own salaries. I personally don’t mind, but there are many of us teachers who really can’t afford to spend more for school supplies for their classes,” she said.

“In spite of the enactment of the Magna Carta for Public School Teachers in 1966, teachers have been waiting in vain for the benefits intended to somehow ease their hardships,” Tinio said. “By shouldering the educational expenses of a teacher’s child, the government shall provide substantial economic relief for teachers, give due recognition to their dedication and hard work and enhance the status of the teaching profession.”

? The measure seeks to improve the economic capabilities of public school teachers by aiming for the provision of a non-wage benefit in the form of free tuition and other fees for their dependent children who are admitted to public postsecondary education institutions.

The proposal exempts public school teachers’ dependent children from paying tuition and all other fees provided that they meet the minimum requirements of the state university, college or any public technical/vocational schools under the Technical Education and Skills Development Authority (TESDA). If both spouses are public school teachers, the exemption shall apply to two dependent children.