MANILA — The family of overseas Filipino worker Andy Dimacali is resolute that they would not let him die in vain. When asked if they are considering filing a complaint against officials, who, according to Crisanto and Dory Ann Dimacali and Jeff Macapinlac, did not lift a finger to help obtain justice for Andy, they replied with a resounding yes.

“We were told that we do not have a choice but to deal with them. They said that even if we ask for assistance from any government official, even the president, we would still have to ask for their help,” Dory Ann said.

Andy is an overseas Filipino worker from Saudi Arabia. His family last spoke with him around the last week of July 2010. During their last conversation, Andy told them that he was bound to return home in a few weeks time. But his family, and his partner Mary Jean Fallaria, with whom he has three children, have not heard from him since then.

When Fallaria inquired about Andy’s whereabouts at his recruitment agency Al Mustaqbal International Inc., they told her not to bother them because “his two year contract is not even up.” Around October 2010, when Andy’s contract had expired, agency employees told Fallaria that they, too, have not heard anything from him and that maybe, “he was already back in the country.” Fast forward to May 6, 2011, Fallaria received a letter from the Department of Foreign Affairs saying that her husband is dead.

On June 10, 2011, Andy’s remains finally arrived home. His half-brother Macapinlac vividly remembers how his older brother insisted over the phone that he should be with the entire family to welcome him home. “But who would have thought we would be welcoming him cold and lifeless?” Macapinlac told Bulatlat.com

“We never thought that it would come to this. He was a good brother and a generous one too,” Macapinlac said.

Unknown cause of death

Since they knew of the terrible fate that Andy had, the Dimacali family has long wanted to know the cause of his death. The DFA, however, has no answer. Mayette Casaysayan of the DFA first told the Dimacali family that Andy died on August 1. Then, Vice Consul Redentor Genotiva of the Philippine embassy in Riyadh told Andy’s twin brother Virgilio, in a telephone conversation, that Andy was killed in his bedroom for allegedly stealing pieces of jewelry, and that the suspect, a certain Edgar Maligaya, is already in jail. 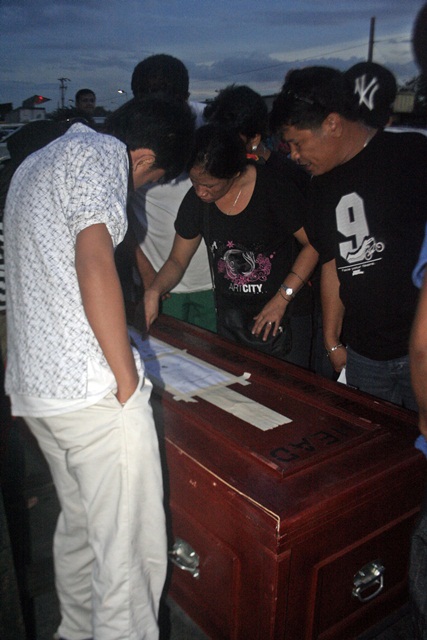 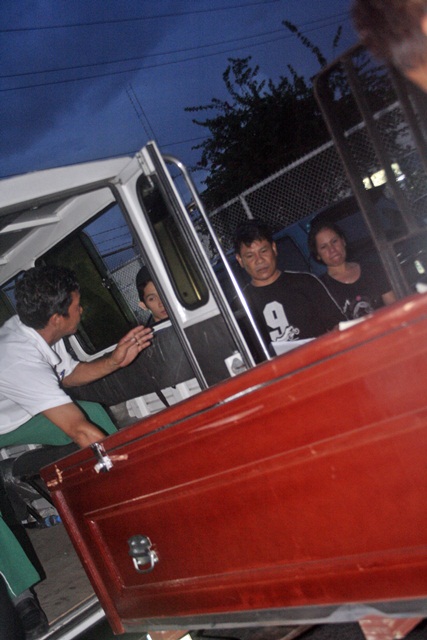 The remains of Andy Dimacali arrive on June 10. His family did not expect that they would one welcome him “cold and lifeless.”(Photos by Janess Ann J. Ellao / Bulatlat.com)

But, in a letter dated June 1, Roussel Reyes, Third Secretary and Vice Consul in Saudi Arabia, told Migrante Middle East regional coordinator John Monterona that Andy died outside a hospital on July 20, 2010, with “wounds in the head, cracked ribs and a bleeding nose, which the Dimacali family found impossible because they were able to talk with him three days later on July 23.

His death certificate, which arrived with Andy’s remains on June 10, declared that he died on August 8, 2010. “Criminal incident” was stipulated as the cause of death.

Its vagueness, according to Virgilio, has pushed the family to ask for the help of local politicians to finance the autopsy of Andy’s remains. “It says here that the cause of his death is blunt traumatic injuries to the head,” he told Bulatlat.com in a text message, “The doctor said that it seems that Andy did not have the chance to defend himself from whoever hit his head.”?

“I feel so bad knowing that my brother was killed helplessly,” Crisanto said. But he added that what outrages him more is the fact that government officialswho are mandated to ensure the welfare of Filipino migrant workers, are “of no help in assisting us in knowing when and how he died.”

“They (government employees) are lucky that I did not accompany my siblings when they went to government offices for updates on Andy’s case or else, I would have made a scene.” Crisanto added. “We want justice to be served. We want the truth.”

And so, when asked if the Dimacali family would like to file complaints against government officials who have neglected Andy’s case, they replied with a resounding “yes.”

“It is the OFWs who have kept these government offices operating through their remittances. But during those times that OFWs need help, in this case my brother who died, they were not there to assist the family.”

Dory said that the mere fact that the case of Andy was kept from the family shows “that they do not have a conscience.” She added that the DFA’s justification that they could not locate Andy’s family because his passport only indicated Tarlac, Tarlac as his address is “shallow and a mere joke.”