June 23 marks the start of a national fact-finding and solidarity mission in Aurora as peasant advocacy groups seek to expose the impact of the Aurora Pacific Economic Zone and Freeport Act (APECO) project in the region. It will continue until June 25.

According to reports, Apeco was established on the strength of Republic Act 10083 which was passed on April 22, 2010. The project covers 13,000-hectares of land. According to repots, five barangays with a total population of 5,430 are directly affected by the project. 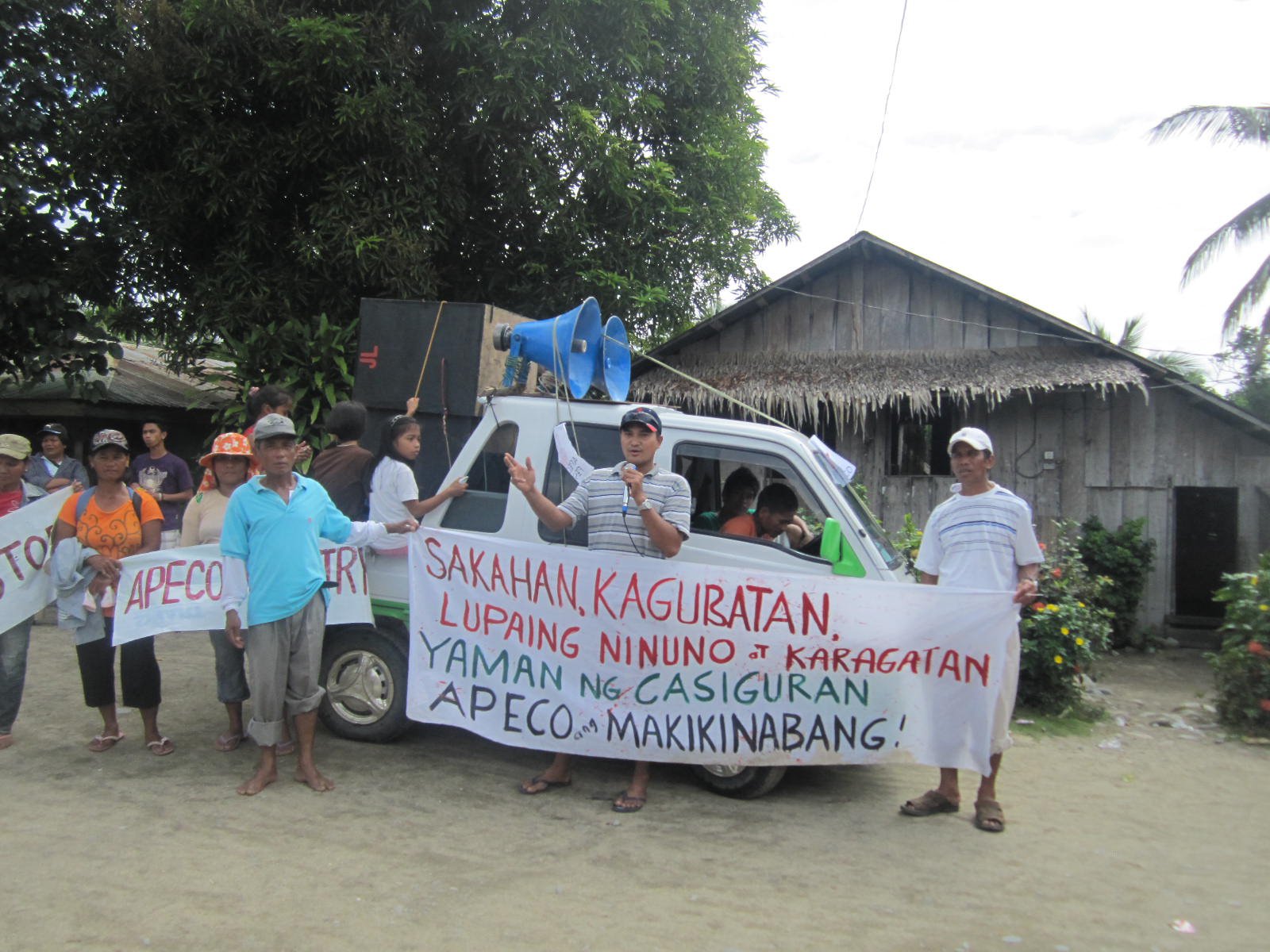 Farmers, fisherfolk and Dumagat tribe members continue their protests against the Aurora Pacific Economic Zone program, saying that it’s immediate and long-term effects on the environment, the residents’ livelihood and welfare are grossly destructive.(Photo by Jon Carlos Sarmiento / Bulatlat.com)

Joseph Canlas, chairman of AMGL insists that the project has destructive effects on the land, livelihood and survival of farmers, fisherfolk, indigenous people living within the project’s territory and the immediate, surrounding areas.

“APECO is the result of a program that came into being through legislation, and like many of its kind, its proponents and supporters mainly sought to financially benefit from it. Those who masterminded the Apeco — primarily Rep. Juan Edgardo Angara and his father Sen. Edgardo Angara and their foreign partners — thought very little if at all what the impact of the project will be on the lives of the marginalized people in Casiguran,” Canlas said.

Aseza only covered 493-hectares of land involving two barangays, Estevez and Dibet. In Apeco, the land areas of Aseza was expanded, and now it covers the said 13,000 hectares, with two more barangays falling under its jurisdiction. The APECO program is composed of residential, commercial, industrial, eco-tourism, highways, ports and airport projects.

Canlas said that the communities’ shorelines are comparable to the beachfronts of perennial tourist destination Boracay.

“This is what prompted the Angaras’ eagerness to convert Casiguran shorelines into eco-tourism sites and to rake millions of profits from investments. Now, Apeco includes the construction of the international port at the Casiguran sound. Needless to say, this will have the effect of damaging the marine environment which is a main source of livelihood of the local fisherfolk,” he said.

In April this year, hundreds of Dumagats, farmers and fishermen mounted a protest caravan against Apeco. Bishops Julio Labayen and Rolando Tria Tirona of the Prelature of Infanta, Quezon, had previously expressed opposition to the project and they urged senator Angara, his sister, Gov. Bellaflor Angara-Castillo, and his son Rep. Angara to stop Apeco’s plans to displace families from home lots, farms and fishing grounds.

The Aurora-based farmers’ group Pamana reported farmers who have been cultivating Casiguran agricultural lands since the 1960s are being threatened with eviction. Farmers who have Certificate of Land Ownership Awards (CLOA), Certificate of Land Transfer (CLT), Emancipation Patents (EP) and Integrated Social Forestry (ISF) certificates stand to lose their land, and while members of Dumagat tribal communities risk losing their ancestral homes.

Leaders of the peasant groups said that the Angaras have long-engaged in massive land grabbing, as well as campaigns of coercion to force farmers to sell their lands. They also said that there is established military presence in the communities, a perennial reminder to the residents to not stand against the Apeco program or risk falling victim to more severe human rights abuses.

According to Pamana, there have been documented cases of abuses perpetrated by the military, including the filing of bogus charges against tribal leaders; the instigation of conflict among indigenous people; criminalization of upland farming; forced and deceptive buying of private lands; fencing of bay areas of fishing communities; and harassment against barangay officials.

Currently, the 48th Infantry Battalion of the Philippine Army, Navy and Marines is stationed at Casiguran. There has also been the report of strafing of a parish priest’s house in Brgy. Bianoan,

The Promotion of Church Peoples’ Response (PCPR) conducted its own fact-finding mission in the area last year. The group exposed the said strafing incident on June 26, 2010; the harassment incident against a human rights advocate on October 8, 2009; and another incident of harassment against a lay minister from Brgy. Bianoan on July 2010. The PCPR also noted that the military has also issued libelous charges against the executive director of a church-based institution through the AFP’s radio programs.

In February, Apeco deputy administrator Ramon Fernando told the media that the Korean Export-Import Bank has already commissioned a consortium composed of the Dasan Engineering and DY Engineering companies to do the feasibility study for three months for the international container port in Casiguran through the extension of a $300,000 or roughly P15-million grant.

“Bidding of the project was already conducted last December in South Korea,” said Fernando, adding that with the presence of an international container port, products for export will no longer have to pass through the container port in Manila and the container port project will accommodate produce in the provinces of Isabela, Nueva Ecija, Nueva Vizcaya and Quirino.

Regarding the fact-finding mission, Canlas said that it was to be part of a “sustained campaign to expose the anti-farmer and anti-people political dynasty of the Angaras.”

“The Angaras have wrought destruction in Aurora and severely undermined the livelihood of ordinary residents. We hope that the fact-finding mission will help in further exposing the damaging effects of this anti-people program,” Canlas said.

Manila Standard columnist Gerry Geronimo in one of his columns said “it is a most serious error for the Angaras to permit their bulldozer of self-aggrandizement and dynastic perpetuation (although perhaps it is premature to call the holding by the Angara family of a senatorial seat, a congressional bench, and a governatorial slot all in a couple of generations a “dynasty”)to rampage against the Dumagats. The forests of Casiguran are their land and their life. Taking that away from the Dumagats, ostensively in the name of the interest of the city folk of Casiguran, is a serious offense against the law that spans even beyond the universe and that is higher than man’s.”

Apeco’s Ramon Fernando has issued a statement on the June 22-25 mission. A copy of the statement was furnished Bulatlat.com.

“We at Apeco always welcome fact finding missions specially those that are objective and really after the truth (sic). If the group happens to be in Casiguran this week, I would be more than happy to welcome them at the APECO site and have a real two-way dialogue on how Apeco envisions to improve the lives of Casiguranins and Aurorans thus effectively contributing positively to the national coffers (sic).”

“The issues that have been mentioned were addressed in a congressional hearing last January 19, 2011 which was initiated by Congresswoman Kaka Bagao. The hearing focused on supposed violations by APECO on the Comprehensive Agrarian Reform Program Extension with Reforms (CARPER) and the Indigenous Peoples’ Rights Act (IPRA ) laws. To date, there has been no conclusion by Congress on the supposed violations. “

“We look forward to your positive response to our invitation so you can see for yourself what APECO has done, presently doing and plans on how to develop Casiguran and the whole Aurora.”