One after after his inauguration as the Philippines’ 15th president, Benigno Simeon Aquino III has not won any fans from farmers organizations in the country.

The Kilusang Magbubukid ng Pilipinas minced no words in describing Aquino’s first year in office, saying that it was a “colossal failure” and that the one-year old administration lacked “a clear and decisive political-economic program for farmers and agriculture.” The group said that instead of attending to the needs of the sector and improving the country’s agriculture, the government has instead launched attacks against farmers’ welfare.

KMP’s secretary-general Danilo Ramos said that it became evident to his group earlier on that the Aquino administration had no intention of implementing a genuine agrarian reform program. He said that proof of this was Malacanang’s hardline stance against giving just resolulion to the long-standing issues concerning Hacienda Luisita and the farmers’ claim to its lands.”

“Hacienda Luisita remains under the monopoly and control of the Cojuangco-Aquinos. Aquino had barely warmed his seat when two months after he was sworn his relatives began cooking up a crooked compromise agreement with so-called farmer-beneficiaries. They wanted to bolster and maintain the treacherous and anti-farmer stock distribution option (SDO) scheme and completely sidestep the issue of land distribution,”said. 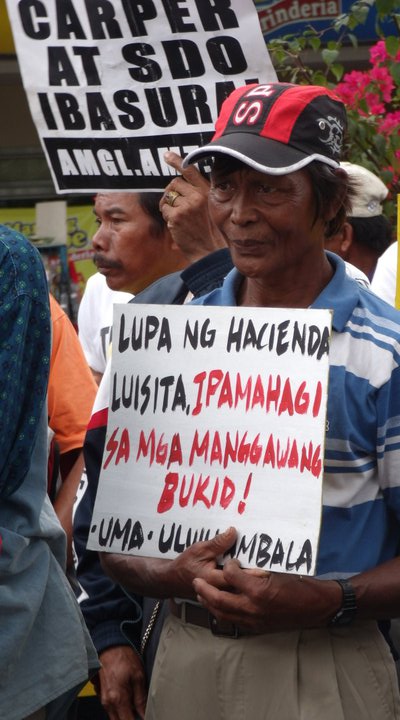 The Alyansa ng mga Magbubukid sa Gitnang Luson said that President Aquino’s first year in office was a year dedicated to land grabbing, displacement, land use conversion and anti-farmer programs and policies in the region and the rest of the country (Photo by Ina Alleco R. Silverio / bulatlat.com)

Ramos said that Aquino’s conduct supportive of his relatives’ ploy spoke much about his stance on agrarian reform issues. “He is all for preserving the economic control and power of landlords. Needless to say, he has condoned the compromise agreement his sisters and relatives hatched, never mind that its implementation was done with coercion, bribery and deception.”

The peasant leader insisted that the Aquino administration is implementing a policy of state abandonment when it came to agriculture. He said that the governments abides by the prescriptions of the World Bank to stop the government’s rice subsidies. “Not a single centavo was given for the National Food Authority’s budget for 2011,” he said, noting that the current P2.5-billion ($58 million) budget of the NFA was realigned from the allocation for the Private-Public Partnership program.

“The government’s transfer of the the NFA’s P8 billion ($186 million) budget is another demand made by the World Bank. So was the conditional cash transfer (CCT) program which breeds the culture of mendicancy,” he said.

The peasant leader also brought up the issue of the coco levy funds and how presidential uncle and San Miguel Corporation magnate Eduardo ‘Danding’ Cojuangco Jr’s. was able to wrangle a legal victory in the dispute surrounding the said funds.

Cojuangco, a former crony of deposed dictator Ferdinand Marcos, bought SMC shares using the coco levy funds exacted by the Marcos administration from small coco farmers during Martial Law. He was able to manipulate use of the funds through his authority as president and member of the board of United Coconut Planters Bank (UCPB) which was established primarily to manage the coco levy funds. At the same time that he was in the UCPB, he was also a member of the board of directors of Philippine Coconut Authority (PCA) when he bought the SMC shares. Cojuanco allegedly utilized the funds as if they were his own and invested them to expand his business empire.

Currently 91 percent of the UCPB are held in trust by the government. Last June 20, however, the Supreme Court laid down its ruling affirming Cojuangco’s ownership of 20 percent of SMC. In reaction, Presidential spokesperson Edwin Lacierda said that the matter is up to the office of the solicitor General (OSG) if it considers it prudent to take action.

“They (OSG) will have to confer with the Presidential Commission on Good Government,” Lacierda said.

Malacanang’s weak response was de facto an approval of the SC’s decision, according to the KMP.

“We can’t say that we’re really surprised by this decision, said KMP’s spokesperson Willy Marbella. “What with President Aquino being a nephew of Danding. Danding failed to legitimize his illegal claim on the coco levy funds in the last four administrations, but he was able to get the SC to give him the thumbs up when his nephew came in power. This was a blow against all coconut farmers in the country, and yet another proof that Aquino’s promises to end corruption were nothing but empty rhetoric,” he said.

The farmers group also holds it against Aquino that former president and now Pampanga Representative Gloria Aquino has so succeeded in evading prosecution for the over the P728-million ($16.9 million) fertilizer fund scam if 2004.

Apart from the attacks against the economic welfare of farmers, the KMP pointed out how the Aquino administration has also taken up the mantle as human rights violator. Ramos said that the current military counter-insurgency program Oplan Bayanihan is an obvious continuation of Oplan Bantay Laya launched by the previous government under Arroyo.

“Oplan Bayanihan is the same brutal dog as Oplan Bantay Laya but with a different collar,” he said.

According to Ramos, the Aquino government had essentially done nothing to improve the human rights situation in the country and has in fact strengthened the prevailing culture of impunity when it came to extrajudicial killings, enforced disappearances, and other human rights violations.

Among the first victims under the Aquino administration is 78-year old peasant leader Pascual Guevarra who was killed by suspected state security forces inside his house in Laur, Nueva Ecija. To date, Ramos said, among the more than 45 victims of extrajudicial killings, more than 50 percent are farmers.

Then there’s also the case of the Southern Tagalog 72 (ST 72), among them peasant leaders,facing criminal charges. The activists include the legal counsel of the Kilusang Mayo Uno (KMU) Remigio Saladero, Jr. They have been slapped with multiple murder and multiple frustrated murder charges in 2008 in Calapan, Mindoro Oriental for acts allegedly committed by the New People’s Army. Last May 18, the regional prosecutor in San Pablo City, Laguna issued a subpoena summoning all accused to respond to the charges.

Farmers in Central Luzon have also no love lost for the Aquino government.

The regional farmers’ group Alyansa ng mga Magbubukid sa Gitnang Luson (AMGL or the Peasant Alliance in Central Luzon) said that Aquino’s first year in office was a year dedicated to land grabbing, displacement, land use conversion and anti-farmer programs and policies in the region.

“Aquino always declares that he’s proud to call Central Luzon his region, but we don’t at all feel the same way about him. Central Luzon farmers have not benefitted any from his presidency in the last year, and we’re not miracles,” said AMGL chairman Joseph Canlas.Canlas said that the government’s moves to continue implementing the Comprehensive Agrarian Reform Program Extension with Reforms (CARPer), and the PPP scheme in the region has wrought great damage.

Canlas pointed out that Aquino as president is also the chairman of the Presidential Agrarian Reform Committee (PARC).

“This is the very body which decided to revoke the SDO scheme in Hacienda Luisita in December 2005, but when Aquino became president, he dismissed the resolution and went against it to favor his own family’s vested interests. He adopted a fake “hands-off” policy and claimed the issue as an ‘intra-corporate’ dispute. No one was fooled by this, especially not the farmers of Hacienda Luisita,” he said.

As of this week, the High Court has yet to decide on the revocation of the SDO scheme. The AMGL and the KMP have both expressed concern that the SC’s decision when release would be favorable to the Cojuangco-Aquinos. The groups said that the SC might order another referendum that would comprise a scheme similar to SDO.

Finally, the AMGL said that land grabbing and displacement in the region worsened during Aquino’s first year in office.

The group cited the infrastructures being built that are currently resulting in the displacement of thousands of hundreds of farmers and their families : the Subic-Clark-Tarlac Expressway (Sctex) and Sta. Rosa-Tarlac national road in Tarlac City and La Paz town; the Aurora Pacific Economic Zone and Freeport Act of 2010 (Apeco) in Casiguran; and the Food Basket project in Maria Aurora, Aurora province.

Farmers are also being displaced and their communities subjected to militarization in Fort Magsaysay Military Reservation in Laur, Nueva Ecija; in San Miguel Bulacan and Guimba,Nueva Ecija; and in the areas being claimed by the Energy Development Corp. (EDC) and California Energy (CalEn) in Pantabangan and Carranglan towns, Nueva Ecija. Farmers are also threatened because of the government’s campaign of cancellation of Certificate of Land Ownership Awards (CLOA), Certificates of Land Transfer (CLT) and Emancipation Patents (EP) in many towns of Nueva Ecija, Bulacan, Tarlac and Pangasinan.

The AMGL also said that Aquino is expanding the programs of the previous regime such as the enhanced “W-corridor” and its road program Metro-Luzon Urban Beltway (MLUB). The corridor is composed of superhighways and national roads piercing through the region’s provinces from west to east and south to north. The MLUB is primarily composed of the Sctex, Tarlac-Pangasinan-La Union Expressway (Tplex), North Luzon East Expressway (Nlex East), Central Luzon Expressway (Clex) and network of national roads. The “W-corridor” also covers eco-zones and industrial hubs in the region: Masinloc Eco Zone (Zambales); Subic Bay Special Economic Zone and Freeport (Zambales); Bataan Technology Park in Morong; the , Bataan Export Processing Zone in Mariveles; the , Clark Special Ecozone; the HLI Ecozone; and the the Hermosa (Bataan) Ecozone.

“These are all being heralded as development projects, but nowhere in this projects is the welfare of farmers mentioned. There is not the least mention made of land reform for farmers or any kind of assistance for them. The Aquino government’s programs and policies treat the farmers of Central Luzon no better than pests which should be wiped out,” canlas said.

Canlas also insisted that the construction of the superhighways in region or the Tplex will cause massive flooding. “Aquino is pushing to convert the region’s prime agricultural lands into cemented estates and superhighways. These are also serious threats against national food security,” he said.

“Aquino’s fist year was similar to a strong typhoon that caused widespread devastation in the lives and livelihood of Central Luzon farmers and all farmers in the country. We have no choice but to strengthen our campaigns of opposition in defense of our lands and our lives. His next year is certain to bring more hardships, but we will not back down,” he said.