You Are Here: Home → 2011 → July → 6 → Fight against Climate Change must be directed against Transnational Corporate Greed – environmentalists → Page 2

“The industrialized countries with their high technology industries are the least affected, but they are the ones who have the highest carbon output and emissions,” he said. “The destruction is caused by the economic activities of the economically advanced countries, but the suffering is mostly borne by those living in the poorer countries. This is a point that constantly needs to be raised when we demand a stop to climate change and call for environmental reforms,” he said.

Masum said that the global fight against climate change should be led by the poor people of the world because they are the ones most affected and the least to blame. He pointed out that there is worldwide livelihood and food insecurity because of how unstable the environment has become, and this should be enough reason for the poor and working people to fight for definitive reforms.
“People are not sitting idly by; 200 people can come up with 200 ideas on how to fight climate change. We have the capacity to see and understand the problem as it is and we have the capacity to come up with solutions if we all unite. We cannot and should not rely on politicians because they are more focused on using issues of the environment to promote and bolster their own careers,” he said.

The presenter from India Dominic D’ Souza of Indian Network on Ethics and Climate Change (INECC) said that in crafting policy reforms and advocacies on the environment, the people must be consulted first and their voices heard. “This is an ongoing practice in India where residents of the severely affected communities conduct multilateral dialogues with environmental advocacy groups and political leaders to put together campaigns on how to mitigate the impact of climate change,” he said. 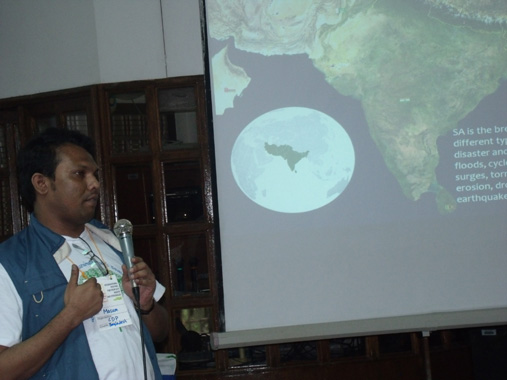 D’Souza said that the parties most affected are the working people, the farmers, fisherfolk, those who make a living from cultivating the earth. “The economic activities of the ordinary people produce very low levels of carbon, but they are the most severely affected by climate change because they have no means to cope. We have to address the cause of climate change — the irresponsible and undisciplined economic and industrial practices of the rich nations. If we cannot see that this is the problem, then we cannot come up with viable solutions,” he said.

According to the People’s Movement for Climate Change (PMCC) the issue of injustice is at the root of the climate crisis, saying that a tiny minority of the world’s population based in the advanced capitalist countries are primarily responsible for accelerating climate change. The group said that for all their posturing, governments of these advanced countries and their corporations have not only refused to fully honor their obligations to reduce emissions and support climate actions in the more impoverished countries in the world’s southern hemisphere, but they have exploited the climate crisis to enforce false solutions that create new profit opportunities, expand their control over natural resources and worsen global warming.

“They are to blame mainly for global warming. The vulnerability of the poorer countries may be due to due to their geographic and climatological features, but this natural vulnerability is worsened because TNCs have control over their economies and critical resources. In the meantime, the supposed “solutions” and “assistance” industrialized countries and their multilateral organizations and international financial institutions are all within the profit-oriented framework and undoubtedly still at expense of the peoples of the Third World,” she said.

“In our fight against climate change, we have to reject false solutions that allow rich nations and their TNCs to continue harming the environment. Climate funds are compensation and not aid — what we are calling for is climate justice, and we can start to achieve this by demanding the abolition of all carbon markets; by ending emissions trading and offsetting as mechanisms for northern countries to meet emission commitments,” she said.

Center for Environmental Concerns’ Ces Quimpo said that “Global warming is affecting everyone across continents now and it is the majority of the world who are poor are the ones paying the dearest price with their lives. It is for this reason that the poor people of the world must also unite in the fight for climate justice,” she said.

Quimpo said that the CEC and the Kalikasan People’s Network for the Environment have been campaigning for a stop to large-scale commercial production and use of agrofuels in the country and against large-scale, open-pit mining that .She said that large-scale agrofuel production worsens GHG emissions by forcing the extensive conversion of farmlands, forests and grasslands into plantations that release carbon into the atmosphere. Mega-mining projects in the meantime cause massive dislocation of farmers and indigenous peoples even as it destroys forests and agricultural lands contributing to climate change.

Dr. Giovanni Tapang of the Agham Scientists for the People group said that all the organizations involved in the global campaign against climate change should strengthen their networks and hold united climate actions worldwide.

The participants also asked for deep and drastic cuts on greenhouse gas emissions particularly of the United States, the European Union and Japan. They said that focus on the negotiations should be on protecting the people’s needs and welfare, reducing existing vulnerabilities from the local to the regional levels, and reviewing and repealing policies, frameworks and programs which contribute to the cumulative effect of reducing people’s capacity to adapt to climate change impacts.