“The government says without the NPA, there would be peace. That is not true. It is the situation that gives life to the NPA.” – Coni Ledesma-Jalandoni

MANILA – In a rare occasion, Coni Ledesma, the former nun turned revolutionary, spoke about women, the revolution and the peace process.

Ledesma, member of the National Democratic Front of the Philippines (NDFP) peace panel, started by providing the context to the more than four decades of civil war. “We are not a mere rebel group. We fight for a Philippines that has genuine democracy, justice,” she said in a forum organized by Working for Empowerment and Good Governance Institute, Inc. (WeGovern).

“We see inequality. Yesterday, I just saw the properties of the Ampatuans — 743 bank accounts, 132 motor vehicles, 113 houses and lots. So much wealth! At the same time, there are people who live by scavenging. The gap [between the rich and the poor] is so wide,” Ledesma said. 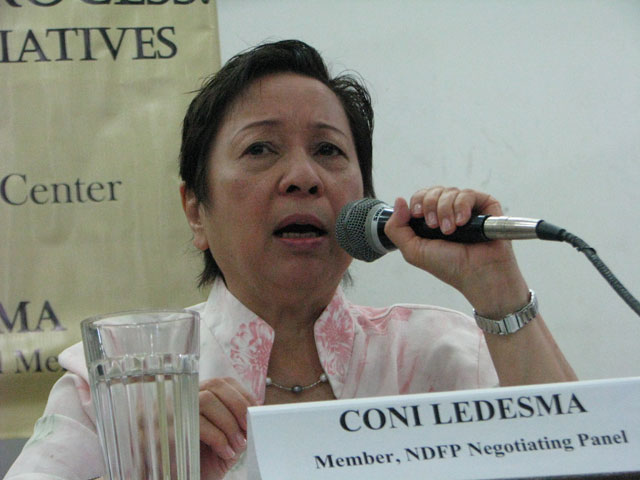 She cited how the farmers and workers are exploited, how overseas Filipino workers work hard to feed their families. “This is our situation. The NPA [New People’s Army] was organized to fight for the rights of the people. The government says without the NPA, there would be peace. That is not true. It is the situation that gives life to the NPA,” she said.

Founded on March 29, 1969, the NPA is the armed wing of the Communist Party of the Philippines.
“This is better, at least [it is] organized, with direction and discipline. Otherwise, the people would spontaneously take up arms and fight. At least, [with the NPA] they know what to do and what not to do,” she said.

“The wealthy have their own armies to protect their interests. Peasants in Negros say ‘We also have an army, the New People’s Army,” Ledesma said.

Speaking as a reactor, Dr. Carol Araullo, chairwoman of Bagong Alyansang Makabayan (Bayan), said: “The question is ‘Why is there a civil war?’ Then you go to the structure of the Philippine society, how to achieve just and lasting peace. For the government, armed conflict is the problem. For the NDFP, armed struggle is the solution. In the end, the people will have the final say.”

Women’s stake in the peace process

Ledesma said women have a high interest in the peace process.

“Our interest is high because we suffer the most. If there is land reform, what would this mean to women? For workers, equal pay and better working conditions are for our interest. Adequate health care, too,” she said.
Ledesma recalled the operation she underwent years ago when she and her husband Luis Jalandoni migrated to Holland. “We had no money. I was two weeks in the hospital and got first class medical care,” she said. After 14 days, the hospital did not charge any amount.

“I said to myself, Filipinos should have this, too. This is worth the fight,” she said. “It is in our interest to fight, for our right to life, to employment, to education, to health care,” she said.

Non-compliance to the agreements

Ledesma also shared an update on the peace talks between the Government of the Philippines (GPH) and the NDFP.

Peace talks resumed in February. Ledesma said the GPH agreed to release 17 prisoners protected under the Joint Agreement on Safety and Immunity Guarantees (Jasig). Jasig, according to Ledesma, provides immunity for all those involved in the peace talks on both sides.

“Supposedly, before the first round of talks, they have been released. Up to now, no one has been released,” Ledesma said.

She said that only Angelina Ipong has been released but not because of the GPH but because the courts have dismissed all the charges against her for lack of merit.

“We want to pursue the peace talks but agreements should be implemented. The issue here is compliance. Do we sit on the table again even if political prisoners have not yet been released? Nobody else would be released,” Ledesma said.

Ledesma said the release of political prisoners has always been an important issue for the NDFP especially since most of the charges are fabricated.

As to the reciprocal working committee on socio-economic reforms, Ledesma said the GPH has yet to submit their draft.

The item on socio-economic reforms is the second agenda laid down by the Hague Joint Declaration signed by both parties. The first is the Comprehensive Agreement on Respect for Human Rights and International Humanitarian Law.