It took almost seven months before Bimbas was finally brought to a hospital to take out the bullet inside his head. 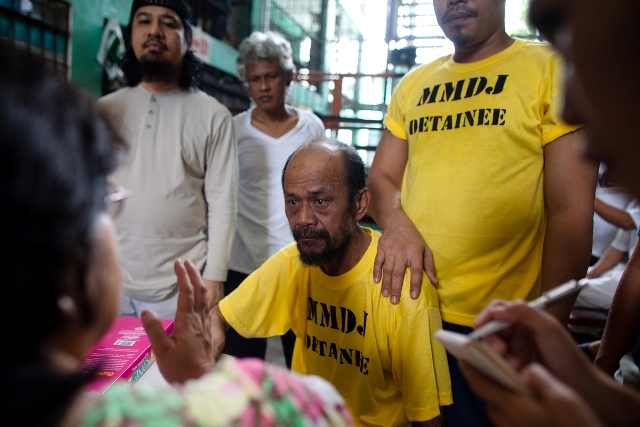 Another detainee, 69-year old Intong Amerol, suffered stroke due to hypertension two months ago. He is suffering from paralysis of the left side of his body and could not walk. He was not taken to a hospital but was only brought to the infirmary. He was given medicines that lasted for half a month.

Dr. Julie Caguiat of the Community Medicine Foundation (Commed) said Intong’s blood pressure should be closely monitored and that he has to take some rehabilitation exercises. A fellow prisoner said the doctor at the infirmary did not teach them how to help the old man with his therapy.

Intong, a farmer and fisherman, was arrested on Sept. 16, 2004 in Basilan. Like many of the Moro detainees, he is accused of being a member of the Abu Sayyaf.

Visits are rare. Through the help of the International Committee of the Red Cross (ICRC), families of Moro detainees are able to visit them once a year.

Moro detainees cook their own food not only to ensure that food is halal or permissible but also because they could not eat the food served by jail authorities. “It is hardly food,” Najer said. “One time, they gave us a small piece of dried fish,” he said, demonstrating with his thumb and point finger less than three inches.

Sun exposure is alien to them. “We could only go out during hearings,” Hiya said. They are pale as paper.

Seven or more detainees share one cell. They made “bedrooms” out of cardboards.

All of them yearn for freedom.

“Those who committed crimes are being freed while we, the innocent poor people, are still here,” Kosair said. “Where is justice?”

“Like any ordinary human being, we also long to be with our families,” Bimbas, who got married inside jail and already has two children, said. 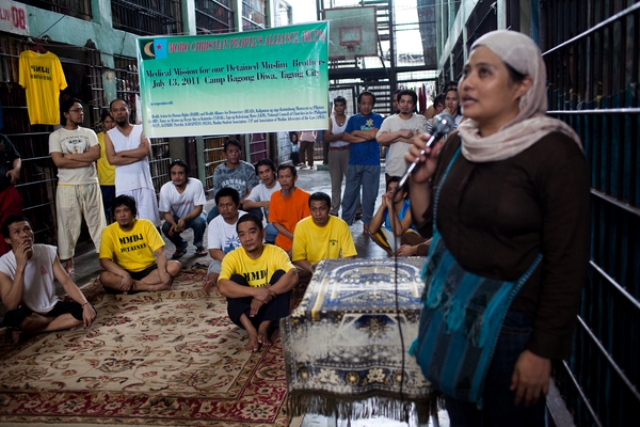 The Moro Christian People’s Alliance (MCPA) has been demanding freedom for the Moro detainees who are victims of political persecution.

The group has conducted dialogues with the Department of Justice to expedite the cases of Moro detainees.

On July 13, the group, together with Katribu, Kalipunan ng Katutubong Mamamayan, Health Action for Human Rights (HAHR) and others held a medical mission for the detainees at Camp Bagong Diwa. The activity also marked the commemoration of the tenth year of the Basilan crackdown.

In 2001, then President Gloria Macapagal-Arroyo declared a state of lawlessness in Basilan and Sulu. More than 200 were arrested and 73 Moros were brought to Camp Bagong Diwa. The MCPA said the crackdown against the Moro people continues to this day.