MANILA – For progressive groups, one year is enough to determine whether President Benigno S. Aquino III is fulfilling his promise of change or not.

During his first State of the Nation Address (Sona), protesters gave him the opportunity to prove himself. They did not burn Aquino’s “The Magician,” a 14 feet by 15 feet effigy, clad in yellow and complete with a wand, cape and hat.

For Ugatlahi, the group of artists that has been making effigies for Sona protests, Aquino, at that time, can choose if he would be a “Harry Potter or a Lord Voldemort,” referring to the hero and villain, respectively, of the popular “Harry Potter” books that have been the basis of the box office hit movie series.

This year, however, Aquino’s effigy would be burned. “After his first Sona, the people are definitely frustrated at him. He is no different from former president Gloria Arroyo,” Crisanto de Leon of Ugatlahi told Bulatlat in an interview.

Ugatlahi is preparing a 13-feet effigy of Aquino “The Rotten Egg” riding on a Humvee, a US military vehicle. 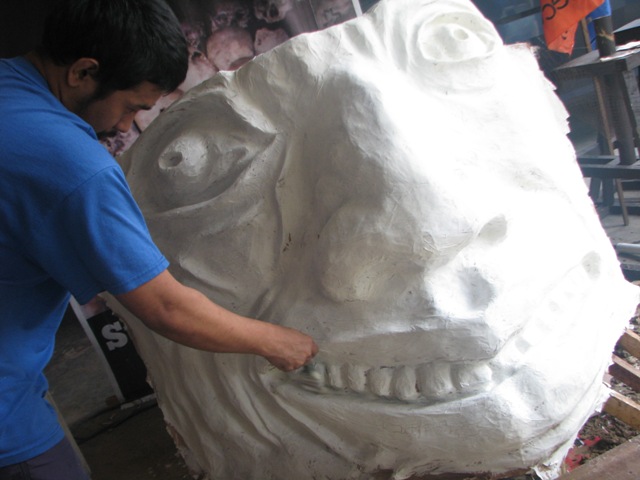 De Leon said the rotten egg symbolizes Aquino’s inutility in addressing the country’s problems. “He wants to be called Pnoy, we will make him a rotten penoy (boiled egg duck),” the artist said.

“Instead of sitting on a throne, we used the Humvee to symbolize Aquino’s puppetry to US imperialism,” de Leon said, adding that most of Aquino’ policies are dictated by the US government.

To complete the comic approach, de Leon said the egg would crack and items representing Aquino’s actions detrimental to the people would come out of it. These include the Public-Private Partnership (PPP), counterinsurgency program Oplan Bayanihan., failure to prosecute Arroyo for corruption and human rights violations, among others.

The effigy, made of paper and wood, is the visual representation of the people’s sentiments against Aquino. “Burning it would be a concrete expression of the people’s anger. I am quite sure that many would want to throw stones, hit and join the burning of the Aquino effigy,” de Leon said.

Ugatlahi has been making effigies since 1998 during the time of Joseph Estrada. They derived their inspiration from the politically radical Bread and Puppet Theater.

As of this writing, Ugatlhi artists are working on Aquino’s face and the carpenter has finished the frame of the vehicle.
They do not mind that the product of their one-week of hard work would just be burned on July 25. In fact, that would be the fulfillment of their work as people’s artists.