“Aquino should prioritize the needs of the majority of the people and not the interest of the big corporations, foreign investors and the imperialist countries like the US.” – Piya Malayao spokesperson of Kalipunan ng mga Katutubong Mamamayan ng Pilipinas (Kamp).

MANILA – Preparations for the second State of the Nation Address (Sona) of President Benigno Aquino III are in full swing.
Bagong Alyansang Makabayan (Bayan) will lead thousands of protesters from different parts of the country to a march toward Batasan road in Quezon City.

Rising unemployment, high prices, poverty, human rights violations and subservience to foreign dictates will be among the issues that the groups will raise for this year’s Sona.

“The reality is that the current government has not shown much difference from Arroyo in terms of economic policies, foreign policies, human rights and governance. The Aquino government may talk big on going after Arroyo, but it has not filed a single case against the former president,” Reyes said in a press conference held July 20.

Danilo Ramos, secretary general of Kilusang Magbubukid ng Pilipinas (KMP), said Aquino should distribute Hacienda Luisita to the farmers. “In Aquino’s one year term as President, he has shown no concern for the plight of farmers,” he said.

Workers reiterated their decade-long call for P125 across the board nationwide wage increase. “Instead of giving a meager cost of living allowance, the government should give justifiable wages.” Lito Ustarez, Kilusang Mayo Uno’s executive vice chairman, said.
The groups also criticized Aquino’s band aid solutions to the country’s problems.

Urban poor group Kalipunan ng Damayang Mahihirap (Kadamay) said the Conditional Cash Transfer (CCT) program of the Aquino government is not the solution to poverty. For this year, Aquino has expanded CCT beneficiary families to reach 2.1 million.
“Aquino promised to uplift the poor, but instead what he gave is the Conditional Cash Transfer (CCT) program, a life buoy,” Gloria Arellano, Kadamay secretary general, said. 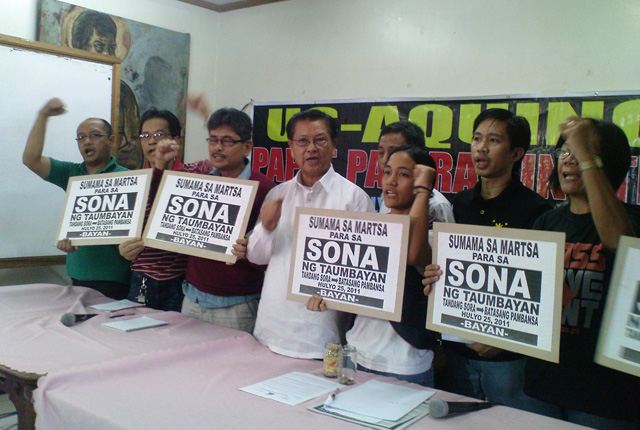 Arellano said instead of allocating P21 billion ($49 million) for this year’s implementation of CCT, the government should have spent it on social services that could have benefited more Filipinos.
Arellano added that the dole-out program is vulnerable to corruption. “While the perpetuation and the further expansion of CCT remain baseless, we fear that these billions of pesos will go to the corrupt hands of its operators.”

Migrant workers, meanwhile, said what they need is help not loan from the government.

“Migrant workers are the ones who are greatly affected by the global economic crisis, they are the first to be fired from their jobs. But the Philippine government’s response to these migrant workers who will come home with no jobs are just band-aid solutions,” Garry Martinez, chairman of Migrante International said.

“Aquino should prioritize the needs of the majority of the people and not the interest of the big corporations, foreign investors and the imperialist countries like the US,” said Piya Malayao spokesperson of Kalipunan ng mga Katutubong Mamamayan ng Pilipinas (Kamp).

“More and more public hospitals are now being privatized and health services were not given free at all,” Nisperos said, citing the privatization of the National Center for Mental Health and the increase in hospital fees at the Philippine General Hospital.

Nisperos also said health workers should also be given security of tenure. “There are 10,000 nurses that Aquino promised to give jobs to. But these jobs are in the framework of working abroad so that they can help in boosting the economy through their remittances.”

A call to jail Arroyo

Roneo Clamor, deputy secretary general of Karapatan, said that under the Aquino government not one single perpetrator of human rights abuse has been sent to jail. He also criticized Aquino for implementing his counterinsurgency program Oplan Bayanihan.

“Within one year of Aquino’s term, there are already 48 victims of extrajudicial killings and five victims of enforced disappearance. He said there are people who should be held liable but until now he has not done any initiative to jail any of the perpetrators,” Clamor said.

Clamor announced that three days before the Sona, political prisoners all over the country will hold a three-day hunger strike to demand for general, unconditional, omnibus amnesty.

In Bayan’s application for permit, the main protest will be held in Quezon City where Reyes said they were planning to march toward Batasan road. “It is only appropriate to hold the protest in the Batasan road because that is where the President will deliver his speech.”

Reyes also said that if the protest will be held in Batasan road there will be less traffic because the deployment of police troops along Commonwealth blocking the road and the protesters causes heavy traffic.