“You go to a public hospital emergency room to have your wound cleaned, you have to first buy some cotton, wound antiseptic, and dressings, before you can be treated,” said Joel Bitanga, 40, an X-ray technician in San Lazaro Hospital.

MANILA – After one year, healthcare in the country has gone from bad to worse — this is the assessment of the Alliance of Health Workers (AHW) on the Aquino government’s impact on health. In a series of protests held by its member unions in different public hospitals in Metro Manila, the group aired the various shocks of Aquino’s touted PPPs (public-private partnerships) on the services of public hospitals and the working condition of health workers and professionals in the country. The group challenged Aquino to stop the privatization “in any form” of public hospitals and to bail out public health by infusing it with a P90-billion ($2.09 billion) budget at least. 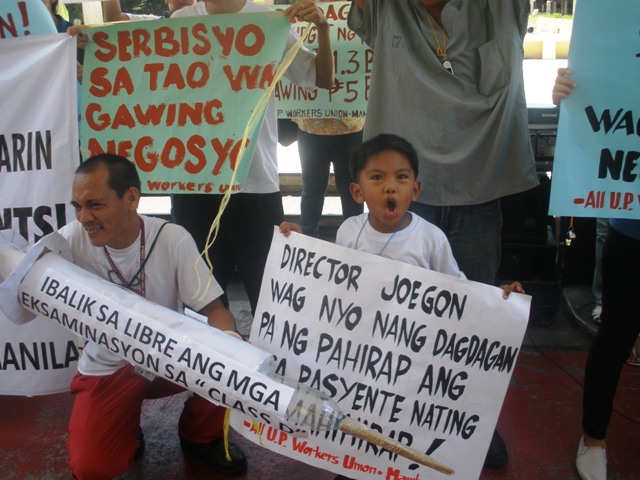 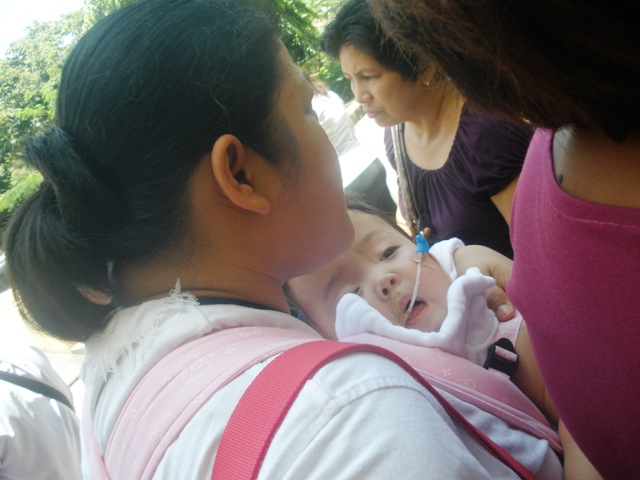 During Aquino’s first year, the country’s main public hospital, the Philippine General Hospital (PGH), for example, has, for the first time in its history, resorted to charging fees even from its lowest ranked charity or indigent patients. In a memo issued last month, the PGH administration reportedly directed its hospital staff to charge the previously free diagnostic and laboratory examinations of “class D” patients. These are the patients who, according to the hospital social workers, belong to the lowest earners or the poorest of the poor among the four groups who qualify for “social service.” Class D used to receive full support (or full charity), while the other classes under social service get discounts, much like the socialized tuition fees being implemented in the University of the Philippines, explained Jossel Ebesate, AHW national president.

In the Philippine Orthopedic Center, fees have been drastically increased early this year, with some increasing more than twice its old amount.

Because of the budget cutbacks implemented by the Aquino administration in the budget for maintenance and other operating expenses of public hospitals, the previous shortages in medicines, supplies and other equipment have become worse, reported the AHW. The exacerbated shortage in turn prompted the administrations of public hospitals to increase fees and to charge fees on previously free items in the hospital menu of services.

“You go to a public hospital emergency room to have your wound cleaned, you have to first buy some cotton, wound antiseptic, and dressings, before you can be treated,” said Joel Bitanga, 40, an X-ray technician in San Lazaro Hospital. He added that if you were brought to their hospital and you can’t breathe, you have to buy the hose and other paraphernalia for your oxygen. 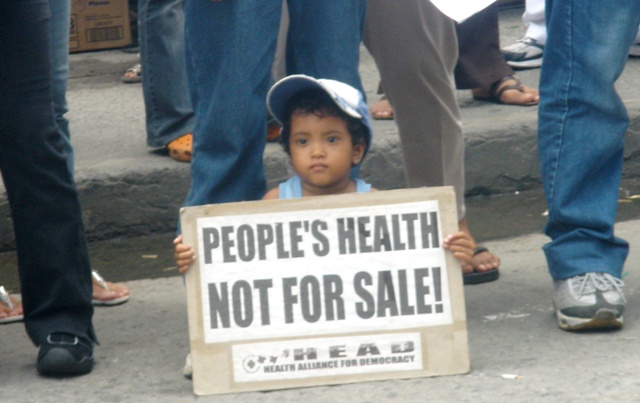 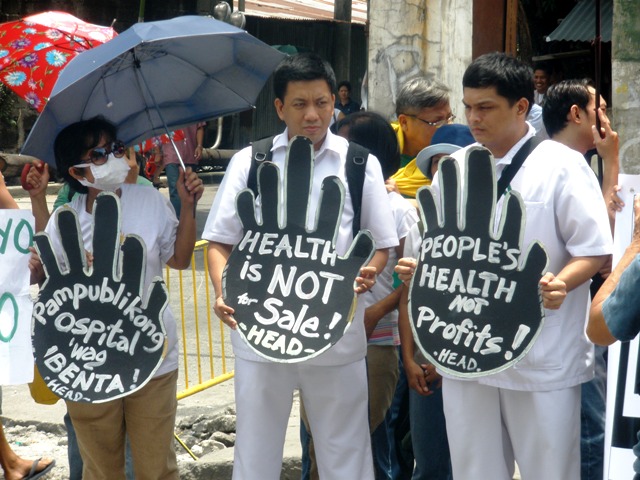 Health workers and a child urge the Aquino government to treat healthcare not as source of profit but as public service.(Photos by Marya Salamat / bulatlat.com)

Picketing in front of San Lazaro Hospital, then at Jose Reyes Memorial Medical Center and in front of the Department of Health, the health workers decried last Monday the increased fees also prevalent in the Philippine Heart Center, the Lung Center of the Philippines, the National Kidney and Transplant Institute (NKTI), the Philippine Children’s Medical Center (PCMC) and the East Avenue Center (EAMC). These are some of the hospitals retained by the national government after it implemented a devolution of health services in 1992.

The practice of charging and increasing fees which the majority of low-income Filipinos are already finding as tough, would likely worsen if the Aquino government pushes through with its planned PPPs targeting even government hospitals, the AHW warned.

Already, the health group noted that some private companies that were able to get concessions in public hospitals have been profiting from this public-private partnership. They cited as example Himex, which provides the radiology “services” of Jose Reyes Memorial Medical Center; the Carte-blance in Lung Center which profits from its dietary services; and Fabricare for Lung Center’s laundry. In PGH, the privately-operated Faculty Medical Arts Building has begun operations this year.

In public hospitals operated by local government units, one measure of its success now is the increase in hospital income, which could be had by adding “private” or “pay wards” and other services that charge fees. The biggest example, for having been the first to be declared as a corporatized hospital, is the La Union Medical Center. Provincial hospitals are now trying to follow its example, after local governments have sent their public hospitals’ directors and staff to “Lakbay Aral” (Study Travel) to learn from “successful” provincial public hospitals.

Gearing up to start new PPPs now are the Philippine Orthopedic Center (POC), the San Lazaro Hospital and the Research Institute for Tropical Medicine (RITM). While the moves are seeking to improve and upgrade the said hospitals – something which the health workers’ union said they also wish to happen – they are decrying the fact that these have to be planned under a PPP setup. They urged the government instead to fund the needed development, rather than enter into partnerships with the private sector whose motives for entering health services are mainly for profit. 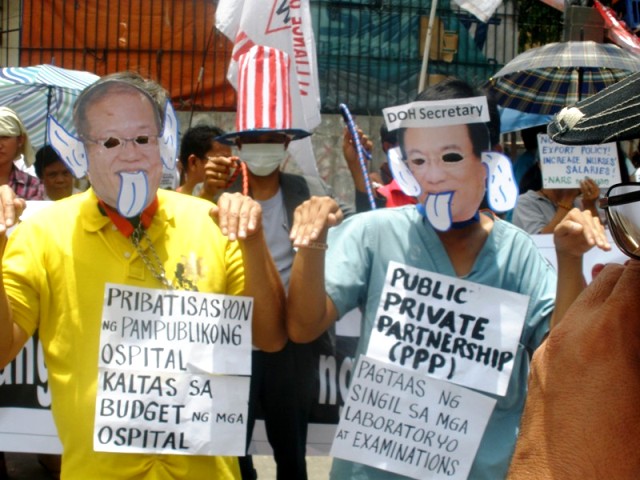 “What will happen to our mentally ill patients? Will they be abandoned on the streets?” asked Arman Palaganas, vice-president of the health workers’ union in National Center for Mental Health. This mental hospital and the Philippine Heart Center are up for bidding in a public auction set to be held under the Aquino administration, the AHW reported.

When all these upcoming PPPs happen, the AHW warned, health care will become even less accessible to ordinary Filipinos. 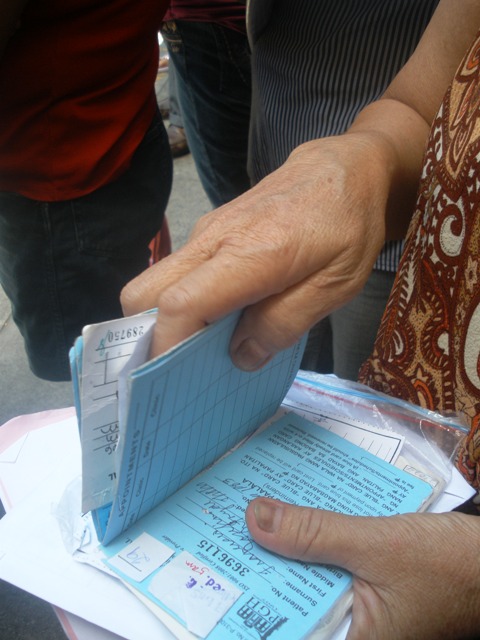 A PGH patient’s charity cards and papers attesting to her indigency could mean little now in terms of free or affordable treatment. (Photo by Marya Salamat / bulatlat.com)

For twenty years now, the country’s plantilla position for health workers and professionals have barely increased, despite the continued pressure of population increases. Worse, while the plantilla positions are being controlled, the AHW noted that the ranks of the country’s health workers are under attack and being reduced by bouts of retrenchment or streamlining through transfer, attrition and early retirement.

Instead of replacing the lost regular health workers, AHW noted that the government itself has been increasingly implementing “flexible labor arrangements,” a favorite under profit-oriented corporations. In the health sector, these arrangements range from contractualization, job-order employment (similar to project-based hiring), and the notorious “volunteerism” where the hospitals not only do not pay the health professionals who serve them but even make them pay for the “training” and “experience.”

As if to gag the health workers’ groups who have been criticizing and providing proofs of the government’s abandonment of its responsibility to ensure the people’s health, there are alleged moves from public hospital managements to bust the health workers’ unions, or else “deceive, divide and crush” the progressive unions under the Alliance of Health Workers. The AHW complained that the management of some public hospitals, such as the National Center for Mental Health, Jose Reyes Memorial Medical Center, Philippine Orthopedic Center and Philippine Children’s Medical Center, “do not recognize and even try to coerce the accredited sole bargaining unit.”

As such, judging from the way the government has been treating Filipinos as patients and as health workers, the health group charged that “the people has never been Aquino’s real ‘boss,’ as he had boasted, but the politicians, the local big landlords and the big local and foreign investors.”

The poor cannot survive under the Aquino government’s health agenda of privatization, the Health Alliance for Democracy said in a statement. The poor will get sicker and die sooner if the rate increases continued, said PGH nursing attendant Ellen Jamison in a picket protest in front of the PGH this week.

The health groups encourage health workers and the families of patients in public hospitals to join in protesting privatization and pushing for health as a human right.