“We are calling on the Aquino government to increase the budget of all public hospitals, not just of the Philippine Heart Center. If high costs of medical treatment even in government hospitals become more prevalent, more patients will die without being seen or treated by doctors.” – Bonifacio Carmona Jr., PHC Employees Association Congress speaker and AHW-NCR Representative.

MANILA — Health workers, medical staff, employees and friends of the National Center for Mental Health (NCMH) in Mandaluyong City held a picket protest last week and this week, in front of their hospital, to oppose the impending displacement of the public hospital due to a government-planned bidding and sale of the land where it is located.

Called Welfareville, the approximately 48-hectare lands in Mandaluyong City are being eyed for conversion into a mixed commercial and residential area, a move participated in by Social Welfare Secretary Dinky Soliman, a union official charged. The planned “development” of Welfareville would adversely affect as many as 4,800 charity patients and 1,500 pay patients, said the National Center for Mental Health Employees’ Association last week, not to mention the other Filipinos who stand to lose their minds as poverty and problems afflict them day by day. 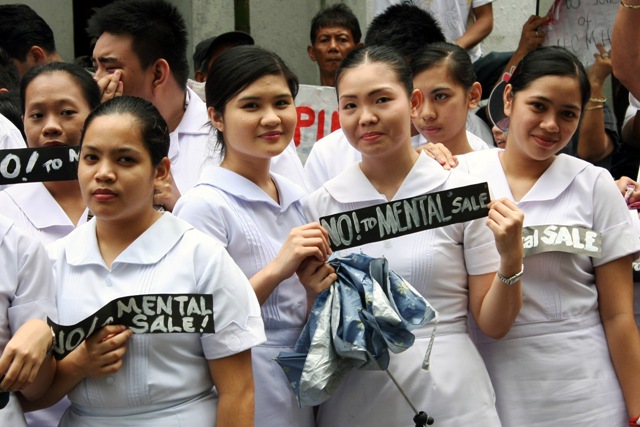 Health staff of NCMH in last week’s protest vs sale of Welfareville.(Photos by Gregorio “Jhun” B. Dantes Jr. / bulatlat.com)

If the conversion pushes through, the NCMH has only one year before it would be transferred, reportedly somewhere in Antipolo. The target final bidding for Welfareville is on June 2 next year. 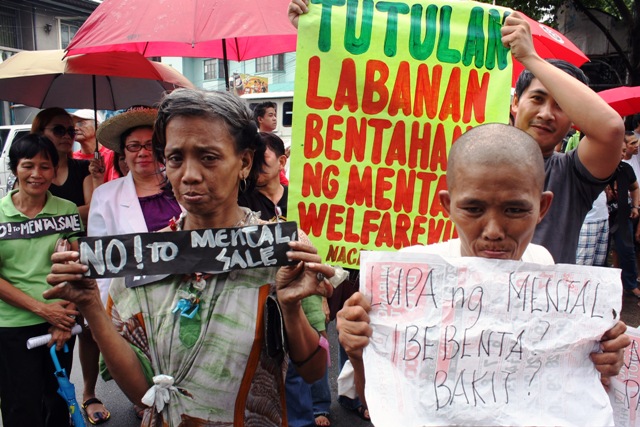 What will happen now to mental patients? asked their friends.

NCMH has a total of 1,700 work force, majority of whom are members of the employees’ association. In one of the protests it held last week in preparation for a bigger mobilization for the protest action during the president’s State of the Nation Address, its union vice-president, Arman Palaganas, told bulatlat.com that the employees are worrying about how the displacement of the mental hospital would adversely affect the thousands of people, especially charity patients, who have mental problems.

Palaganas warned that if mental health patients continued to be neglected, more of them may likely just end up wandering our streets.

As weekly protests break out in the National Center for Mental Health in Mandaluyong City, in Quezon City, it is the Philippine Heart Center employees who have also been holding picket protests to call attention to the huge budget slash that has continued to afflict the hospital. According to the employees’ union, the 77-percent budget slash they had been forced to work with is pushing the hospital to indebtedness, lack of supplies and since this year, a strict decision of the hospital management to hold back on services to charity heart patients, even if servicing them remains to be the hospital’s supposed main mandate. 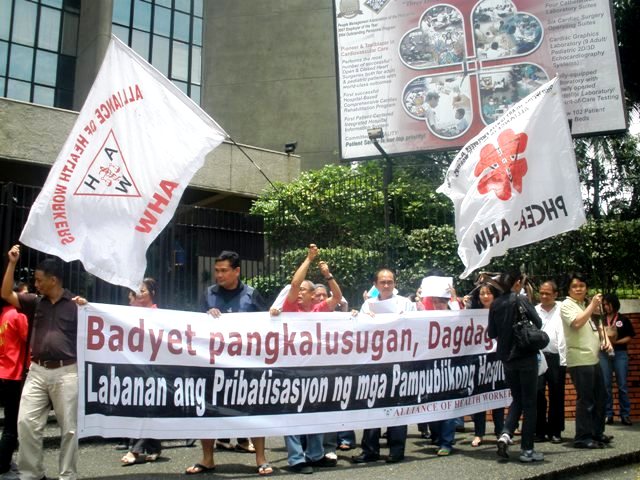 PHC employees reminded Aquino about his promises to take care of the people’s health.(Photo by Marya Salamat / bulatlat.com)

Health workers warned that all these talks of auction only meant privatization, which would further make health services costlier and unreachable for the majority of Filipinos.

“We are calling on the Aquino government to increase the budget of all public hospitals, not just of the Philippine Heart Center. If high costs of medical treatment even in government hospitals become prevalent, more patients will die without being seen or treated by doctors,” said Bonifacio Carmona Jr., Philippine Heart Center Employees Association Congress speaker and Alliance of HealthWorkers NCR Representative. 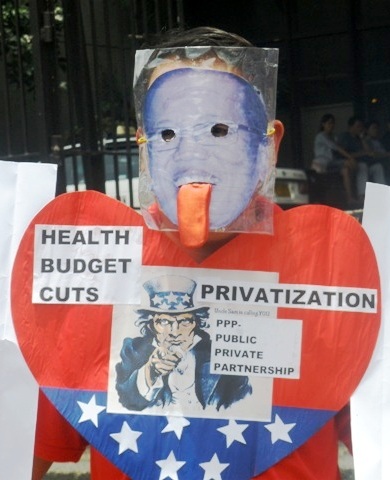 While president Aquino mentioned about helping the poor through the 4Ps (Pantawid Pamilyang Pilipino Program), his administration is actually denying the same poor people access to health services, as a result of big budget cuts and privatization of public hospitals, like the Philippine Heart Center, Philippine Orthopedic Center and San Lazaro Hospital,” said Robert Mendoza, secretary-general of Alliance of Health Workers.

“We hope the government would listen to the health workers,” said Dr. Gene Nisperos, vice president of Health Alliance for Democracy. He praised the health workers for taking it upon themselves to fight for the interests of their patients for better services. Nisperos said the government has been doing the opposite – rather than ensuring that Filipinos are getting appropriate and sufficient health care, the government is implementing privatization, PPPs and rate increases. He urged the government to stop all these. And to revert to its promise of respecting health as a right.

Nisperos said for starters, the Aquino government can improve health care by giving its health workers humane wages and giving the country’s health a budget that is sufficient for the people’s health needs.