“However long this takes, we will never give up. What is important is we get justice for what was done to us. We urge newly-appointed Ombudsman Conchita Carpio-Morales to act on the cases we filed that aim to seek justice for victims of human rights violations.”
– Raymond Manalo, victim of torture and arbitrary detention

MANILA – Survivors of torture, their lawyers and supporters are confident that the new Ombudsman will act speedily to resolve the years-long complaints filed against several military officers for rights abuses.

Raymond Manalo and Oscar Leuterio filed today urgent motions to resolve the charges they filed against retired military officers Lt. Gen. Hermogenes Esperon, Maj. Gen. Jovito Palparan Jr., Maj. Gen. Juanito Gomez and other officials and personnel of the 24th Infantry Battalion of the Philippine Army and members of the Citizen’s Armed Forces Geographical Unit (Cafgu). Palparan and others were charged with kidnapping, arbitrary detention, physical injuries, threats, and involuntary servitude, among others.

Both were taken by soldiers in separate incidents and were subjected to various forms of torture. The two are also witnesses to the abduction and torture of University of the Philippines (UP) students Karen Empeño and Sherlyn Cadapan and farmer Manuel Merino.

The National Union of Peoples’ Lawyers (NUPL), whose members serve as lawyers of the complainants, noted that SC Justice Carpio-Morales was the one who penned the latest May 2011 decision granting the writ of amparo in favor of Cadapan, Empeño and Merino.

The group said the court found Manalo’s testimony as clear, categorical, consistent and credible. “Thus, with the evidence on hand, Manalo and Leuterio as well as other victims of human rights violations and their kin seek the speedy resolution of the charges against Palparan under the watch of Ombudsman Carpio Morales. “It is only through trying perpetrators and putting them behind bars that we can abate cases of abuse of state forces against innocent civilians,” Edre Olalia, NUPL secretary general, said. 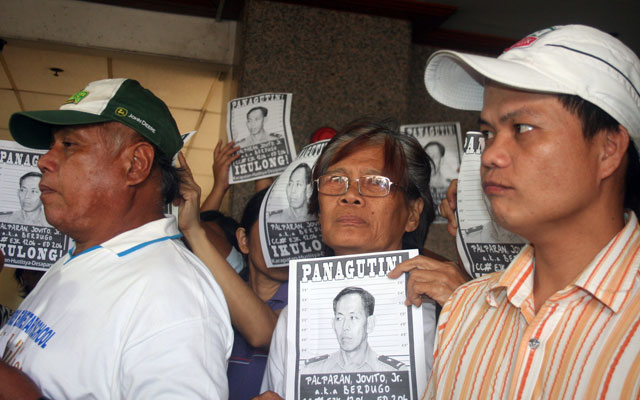 L-R Oscar Leuterio, Erlinda Cadapan and Raymond Manalo are hopeful that the new Ombudsman will act on the cases filed against human rights violators. (Photo by Ronalyn V. Olea / bulatlat.com)

“We are encouraged as honour and integrity is somehow restored into our justice system. With the appointment of a new Ombudsman, we can now prosecute human rights violators without worrying that the interests of the victims will be compromised by patronage politics,” Olalia said.

Manalo filed the charges on September 12, 2008 and Leuterio filed his complaints on November 16, 2006 at the office of former Ombudsman Merceditas Gutierrez.

“However long this takes, we will never give up. What is important is we get justice for what was done to us. We urge newly-appointed Ombudsman Conchita Carpio-Morales to act on the cases we filed that aim to seek justice for victims of human rights violations,” Manalo said.

The NUPL said that as far as the available records at the Ombudsman have shown, the cases have not moved beyond the initial stages of preliminary investigation. “In fact, this gross negligence and deliberate refusal to resolve the charges was one of the grounds that were supposed to be included in the impeachment complaint joined in by NUPL against Gutierrez in August 2010,” Olalia said.

In the case filed by Leuterio, no counter affidavits have been filed by any of the respondents. The NUPL asserted that since the Office of the Ombudsman has not resolved Leuterio’s case despite the fact that the complaint has been filed as early as November 16, 2006, the criminal and administrative complaint should be immediately resolved.

“After our cases were not acted upon by Ombudsman Gutierrez and President Arroyo, we still call for justice years after our ordeal. Nothing will happen if fear overcomes us, while so many victims are seeking justice,” Manalo said.

In an interview, Gerrard Boot, a judge from Amsterdam, the Netherlands who was part of an international fact-finding team that looked into the spate of extrajudicial killings in the Philippines in 2006 and 2008 said that five years of waiting is too long.

“It’s difficult to understand how a court whose duty is to resolve cases would do nothing. That is just wrong,” Boot said, adding that the Melo Commission found Palparan responsible under the principle of command responsibility.

Asked about his perception on the new administration, Boot said: “Aquino said in his State of the Nation Address (Sona) that they take it seriously to look to the past. If indeed terrible things happened in the past, something must be done. I hope they will keep their words and will act accordingly.”

Erlinda Cadapan, mother of missing UP student Sherlyn Cadapan, joined the filing of the motions before the Ombudsman this morning.
“We hope that the new Ombudsman will look into the cases. We are only telling the truth,” Mrs. Cadapan told Bulatlat.

“There is a strong case for the complainants Leuterio and Manalo; their personal testimonies with regard to their abduction by the military were found forthright, consistent and credible by no less than the Supreme Court as it served as the basis of the its recent order for the military to immediately release university students Sherlyn Cadapan, Karen Empeño and farmer Manuel Merino,” Olalia said. “The integrity of their testimonies has been unshaken despite malicious aspersions cast by the military,” Olalia added.

Leuterio, together with his three companions, was abducted by military personnel on April 17, 2006 Dona Remedios Trinidad, Bulacan. Leuterio was brought to Camp Tecson, San Miguel, Bulacan and eventually to Fort Magsaysay, Nueva Ecija, where he saw Empeño and Cadapan. He was released by the military after he pretended to cooperate with the military.

Manalo and his brother Reynaldo were abducted in San Ildefonso, Bulacan on February 14, 2006 and were detained in three military camps and two safehouses. Within 18 months of captivity, they suffered from severe torture, endured involuntary servitude and inhumane treatment in the hands of their military captors.

Ephraim Cortez, NUPL assistant secretary general for legal services, noted that the high court, in October 2008, unanimously affirmed the granting of the writ of amparo in favour of Raymond and Reynaldo Manalo, and found that they are in the custody of the military. “By pointing to them as the persons liable for the disappearance of Raymond Manalo, the Court itself gave credence to the charge of arbitrary detention of the Manalo brothers against Palparan et. al. The SC thus effectively submitted ‘probable cause’ in the criminal case against the accused,” Cortez said.

“The wheels of justice appear to be rolling and, finally, it is already catching up with Palparan to smash the arrogance and brazenness engendered by a climate of impunity,“ Olalia said.