“The DAR is mandated to implement land reform, but now under this Pamana program, it is being tasked to be yet another agency carrying out counter-insurgency campaigns. Yet again we insist that farmers in the provinces want land, not bullets.” –Kilusang Magbubukid ng Pilipinas

There’s money for dole-out schemes, but no funds for genuine economic reform programs?

The Unyon ng mga Manggagawa sa Agrikultura (UMA) criticized the Aquino administration’s 2012 budget proposal after it was revealed that the governments wanted a 59 percent increase in its dole out scheme called the Conditional Cash Transfer (CCT) or the Pantawid Pampamilyang Pilipino (PPP) Program. From P23 billion (US$534,883,720) , the government proposed to raise the dole-out program’s budget to P34 billion (US$790,697,674). Malacañang spokespersons have said the executive is aiming to increase CCT recipients from three million to five million people by the year 2015.

UMA secretary-general Rodel Mesa said the government should prioritize the implementation of genuine economic reforms instead of bolstering a scheme that fosters a mendicant mentality among the Filipino poor. According to Mesa, it is apparent that President Aquino has no intention of improving the economic welfare of Filipinos.

“The CCT scheme is not designed to improve people’s worsening economic condition; it aims to maintain a state of life wherein the poor remain poor, but increasingly dependent on alms, on dole-outs from a government with deliberately twisted priorities,” he said.
Mesa said instead of fattening the budgets of non-productive schemes like the CCT program, the Aquino government should increase budgets for social services and improve infrastructure for public housing, education, and health. 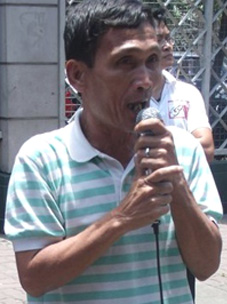 Unyon ng Manggagawa sa Agrikultura secretary-general Rodel Mesa said the government should utilize its funds to implement genuine and concrete economic reforms instead of bolstering a scheme that fosters a mendicant mentality among the Filipino poor. (Photo by Ina Alleco R. Silverio / bulatlat.com)

“Filipinos need steady employment and living wages, not dole-outs, he said.”Dole out measures will not answer the problem of the ballooning poverty and hunger. Aquino lied through his teeth when he said that the rate of hunger incidence fell by one million from the previous three to four million in the last year. This is impossible given how the quality of life has deteriorated further because of the relentless oil price hikes, high electricity rates and the refusal of the president to heed and support calls for an across-the-board wage and salary increase for workers and employees. On the other hand, Aquino failed to mention the growing labor force of 1.2 million and the 829, 900 increase in under employment as revealed by institutions like Ibon Foundation,”he said.

“No economic turn-around is possible unless there’s genuine land reform. The policies of deregulation, liberalization and privatization also stand in the way of national industrialization which will provide secure employment and higher wages. The CCT scheme is nothing but band-aid solution, and its the worst kind of charity because it comes from a government that can undoubtedly provide more if only it had the political will to do so,” he said.

In the meantime, another farmers group is protesting against the inclusion of a counter-insurgency fund in the allocations for the Department of Agrarian Reform (DAR).

The Kilusang Magbubukid ng Pilipinas (KMP) decried the insertion of P17.623 million (US$409,837) for a counter-insurgency program in the DAR’s proposed P17.9 billion budget for next year. 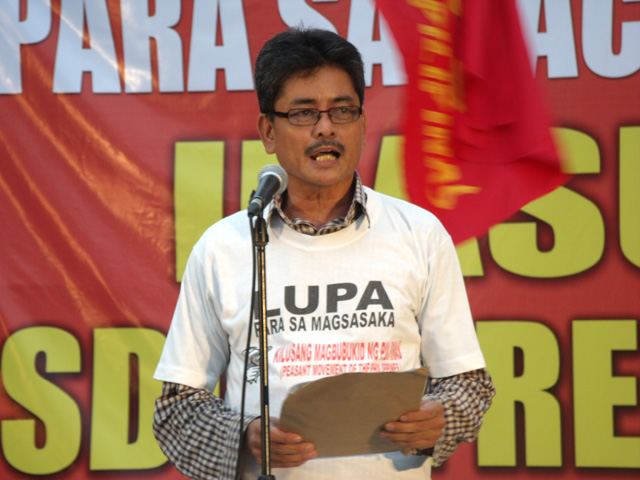 Kilusang Magbubukid ng Pilipinas secretary-general Danilo Ramos protests against the inclusion of a “counter-insurgency fund” in the budget proposal for the Department of Agrarian Reform (DAR).(Photo by Ina Alleco R. Silverio / bulatlat.com)

KMP secretary-general Danilo Ramos said the inclusion of the “Payapa at Masaganang Pamayanan Program” Pillar 2 Program in the DAR’s budget shows that the Comprehensive Agrarian Reform Program (CARP) is primarily a counter-insurgency program and not .a social justice measure.

Pamana is directly under the Office of the Presidential Adviser on the Peace Process (OPAPP). It has three pillars that are being implemented by the national government where the OPAPP is the lead agency. Pillar 1 is formulation of policies; Pillar 2 is on community development projects while Pillar 3 focuses on inter-regional development.

According to reports, Pamana was launched earlier in June in 60 barangays in six towns in remote and far-flung communities, especially those in conflict-affected areas. Among those directly involved in its implementation are the Armed Forces of the Philippines (AFP) and Philippine National Police (PNP) with support from local government units (LGUs).

As per reports from the AFP, Pamana is also aimed at being a ” peace-building program” to develop conflict-affected areas and bring the government to the people through improved delivery of basic services.

“The DAR is mandated to implement land reform, but now under this Pamana program, it’s being tasked to be yet another agency carrying out counter-insurgency campaigns. Yet again we insist that farmers in the provinces want land, not bullets,” Ramos said.
The peasant leader also took a swipe against the Carp, saying that it continues to be a the milking cow of big landlords. He said that from 1972-2008, landlords have received P289 billion (US$672,093,023) in payments for 1,619,513 hectares courtesy of the Carp.

“Under the guise of just compensation, big landlords are about to feast once more on the DAR’s P17.92 billion proposed budget while farmers remain landless,” Ramos said.

“Unfortunately, a total of 394,884 hectares in Southern Tagalog are locked in agrarian disputes. The agrarian cases in the region are far bigger and put into question the so-called accomplishments of the DAR,” the peasant leader said. “Now, where will the DAR use the P545.9 million in Southern Tagalog?”

Finally, KMP’s Ramos also warned of massive lay-offs affecting the DAR’s rank-and-file employees due to the special provision in the proposed budget stating that the agency will gradually scale down its Organizational and Staffing Structure in anticipation of the completion of land acquisition and distribution under the Carp.

“Thousands of DAR employees are about to lose their jobs due to this provision. The DAR’s 2012 budget is both anti-farmer and anti-government employee,” Ramos said.