MANILA – Environmental advocates and anti-imperialist groups condemned the continuing nuclear threat from the US as they marked the 66th anniversary of the dropping of atomic bombs at Hiroshima and Nagasaki.

In a statement, the International League of Peoples’ Struggle (ILPS) criticized the US for continuing to stockpile nuclear armaments amid the horrible effects of the Hiroshima and Nagasaki bombings. The US government is the number one nuclear power, owning more than half of the 20,500 nuclear weapons in the world.

“The possession of nuclear weapons by the militaristic US government posses a large-scale threat to the people and the environment. It uses these weapons to bully nations into submission and maintain its status as a world superpower,” Kalikasan People’s Network for the Environment (Kalikasan-PNE) said in a statement.

In its 2010 Nuclear Posture Review, the US has increased funding for the rebuilding of its “ageing” nuclear infrastructure, ILPS said. 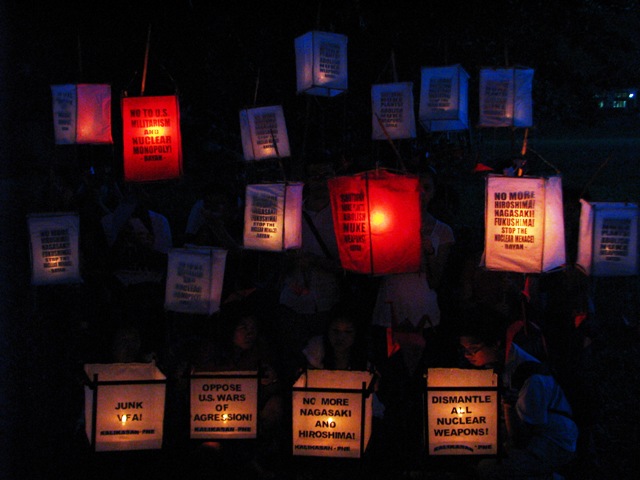 ILPS added that the Obama administration plans to spend $6.3 billion until 2016 to extend the lifetime and usage capabilities of the warheads in their stockpile. It seeks to finish the construction of nuclear materials production facilities, which costs more than $10 billion and pledged another $6.24 billion to modernize its missiles, SSBN submarines, Joint Strike fighter planes and B-2 and B-52 bombers that are designed to deliver nuclear warheads.”

The US continues to test its intercontinental ballistic missiles such as the Minuteman III for readiness and keeps its Global Strike capability to hit targets anywhere in the globe in less than an hour, the group said.

ILPS noted that the US continues to expand its war foothold with new military bases such as that on Jeju Island in South Korea and in Okinawa despite resistance from local residents. “It uses bilateral military agreements such as status of forces and base sharing agreements to virtually convert whole countries as their military base,” it said.

Jose Maria Sison, ILPS chairman, said the US “promotes double standards in nuclear proliferation– one set of rules for Israel and India and another set for potential enemies such as North Korea and Iran.”

In a forum Aug. 9, Rey Casambre, chairman of the ILPS-Philippine chapter, said the Non-Proliferation Treaty and other treaties on the use of nuclear weapons, actually aim to limit the capacity to use nuclear weapons among imperialist powers.

“Nuclear armaments will not be dismantled by the imperialist powers. They need them for war and in preparation for war. Mere possession gives them advantage over other countries,” Casambre said.

As opposed to the US, Renato Reyes Jr., secretary general of Bagong Alyansang Makabayan (Bayan) noted that North Korea has called for the total elimination of nuclear weapons.

Reyes said the recent Fukushima meltdown in Japan raised anew the consciousness of the peoples of the world on the dangers of nuclear plants and weapons.

Dr. Romeo Quijano, president of Health Alliance for Human Rights (HAHR) said the level of radiation has reached a highly dangerous level and highly toxic nuclides have been detected as far as the US.

Quijano said there is an international cover-up on the extent of tragedy in Fukushima to protect the interests of the nuclear industry.

Citing various studies, Quijano said there is no safe dose for radiation exposure. The dose limits set by the International Commission on Radiation Protection, he said, provides reasonable latitude for the expansion of atomic energy program.

Unlike other toxic chemicals, Quijano, a leading toxicologist in the country, said radio nuclides can neither be seen nor felt and are more dangerous. The release of radiation, he said, can cause cancer, transgenerational genetic defects, immune system dysfunction, neobehavioral impairment, blood diseases, among others.

Physicist Giovanni Tapang, chairman of Agham (Science and Technology for the People, not the party list group), said the shelf life of nuclear waste extends up to hundreds of thousands of years and waste disposal remains a problem.

Tapang cited other major problems on the use of nuclear energy such as safety, cost and effects on the environment. 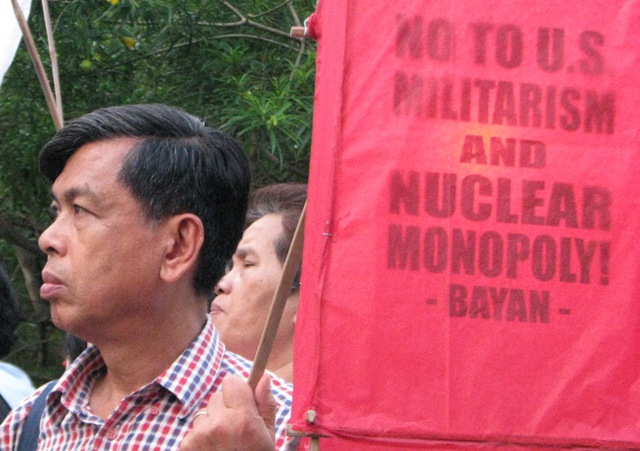 Quijano said the design of the Fukushima plant is vulnerable to meltdowns, with 42 percent likelihood of containment failure, according to Sandia National Laboratories.

Casambre said only the people’s movements can deter the use of nuclear weapons.

In its fourth international assembly, the ILPS adopted resolution calling for the disarmament, demobilization and closing down of nuclear plants and weapons and for the shutting down of US military bases.

Bayan’s Reyes said the protests in Japan following the Fukushima tragedy forced the Japanese government to limit its dependence on nuclear energy. In Germany, Reyes said, protests compelled the Prime Minister to close down 17 nuclear plants by 2012.

In the Philippines, Reyes said, the campaign against nuclear weapons is part of the anti-Visiting Forces Agreement (VFA) struggle. Provisions of the VFA exempt US warships and material from inspection by Philippine authorities.