August 9 is the international day of the world’s indigenous peoples, but the “occasion is a grim one as human rights violations and ancestral landgrabbing are rampant.” – Piya Macliing Malayao, KAMP.

Sidebar: Indigenous peoples’ groups decry use of IPRA and NCIP for development aggression

MANILA – “We’re not asking for money, we’re just bringing to the attention of the Aquino government our pleas—that they stop those who try to deceive us and dig up and destroy our lands. We have nowhere else to go to. Our life is tied to the land and mountains,” Lope dela Cruz, 70, a Dumagat from Tanay, Rizal, said in Filipino before members of other indigenous peoples’ group in a rally at the Mendiola Bridge last Tuesday, World’s Indigenous People’s Day.

Garbed in Dumagat attire, Mr dela Cruz had marched with fellow indigenous peoples garbed in the attire of their own tribes. Dela Cruz shared how the Dumagat in Rizal are being denied their livelihood as the mountains are “crawling with state soldiers who are barring the Dumagat from their usual farming activities there.”

“How would we survive if we could not hunt for food or do some farming in the mountains? We have no other source of livelihood,” dela Cruz said, adding that if the mountains were to be continuously denied them, they would die of hunger. 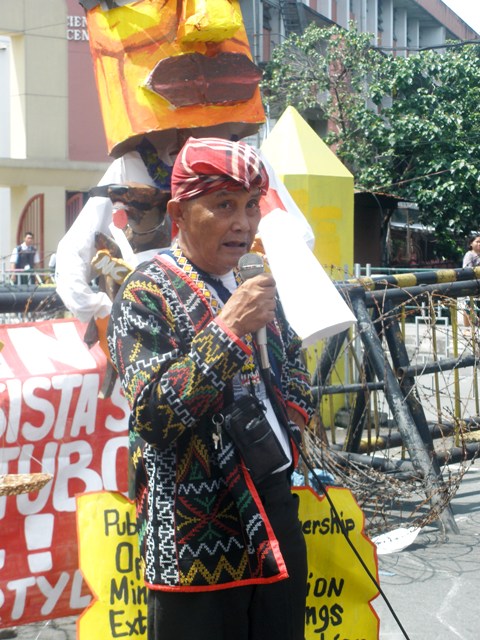 Many of the Philippine indigenous peoples have historically lived off the country’s forests in the mountains, practicing nomadic agriculture that allows the forest to regenerate. But that practice and livelihood are now under severe threat, as leaders and representatives of various tribes recount various examples of a national phenomenon – the vicious and massive displacement of indigenous peoples everywhere to give way to giant corporations’ mining, logging and energy projects.

KAMP, the national alliance of indigenous people’s organizations in the Philippines, said, in their statement on the occasion of the international day of the world’s indigenous peoples, large-scale mining is “the largest bane to indigenous peoples.” To date, the group has tracked down nearly 600-thousand hectares of the 1.05-million hectares approved for mining as of June this year as covering ancestral territories. In the Cordilleras in the north, KAMP noted that 60-percent of the entire land area has looming mining operations.

Even the investments in the energy sector that President Benigno “Noynoy” Aquino III boasted about in his recent State of the Nation Address (SONA) are deemed as disastrous not only to the environment but also to the indigenous peoples, based on KAMP’s study. These energy projects include the Laiban dam in Rizal, the privatization of the Agus-Pulangi dam in Northern and Central Mindanao, and the pending coal mining operations in Surigao del Sur.

To secure these large-scale mining, logging and energy projects, the government is heavily deploying military and conducting operations in its covered areas, KAMP has noted. 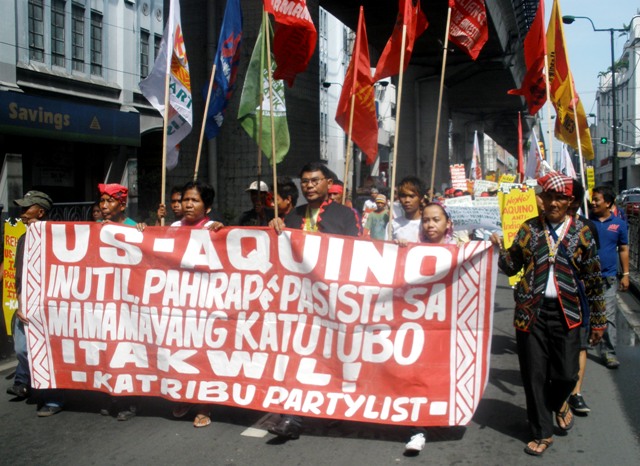 “Mining operations of giant companies have always been coupled with massive deployment of state soldiers,” said Johnny Sawadan, 47, spokesperson of the Cordillera People’s Alliance, in a speech before fellow indigenous peoples at a rally in Manila. Sawadan said that in their area, numerous battalions of the 501st, 502nd and 503rd Brigade of the Armed Forces of the Philippines are deployed to supposedly protect the citizens but their presence only results in rights violations of the people of Cordillera.

In just one year of the Aquino administration, “eight indigenous peoples were killed by state forces… More than a thousand Lumad fled their homes because of military abuse,” said Piya Macliing Malayao of KAMP. There had also been indigenous peoples subjected to military harassments, illegal arrest and physical injury. Military attacks unfortunately do not differentiate between children and adults, KAMP noted, as they pointed to indigenous children who either witnessed their parents being harassed, or the children themselves got injured and harassed. In the killing last June of Higaonon Arpe Belayong and Solte San-Ogang, two children were also injured.

Fermin Queron, 54, from an organization that means the united culture of Palawan, said during their World Indigenous Peoples’ Day rally at the historic Mendiola Bridge (now Chino Roces Bridge) that they took part in the said action to tell President Aquino that “we, too, are human.” 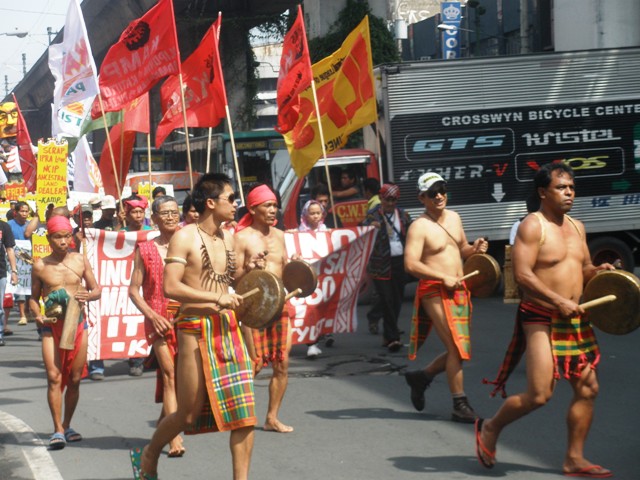 IPs went down from their mountains to remind the government that they, too, are human.(Photos by Marya Salamat / bulatlat.com) 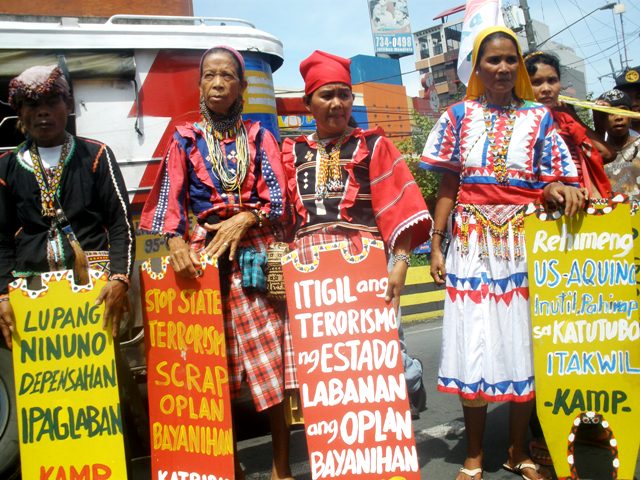 Queron recounted how, when they have nothing to eat, they make do with honey, “almaciga” and other plants and roots they used to get freely from the mountain forest. But today, he said, it saddens them that their right to go to those parts of the mountain is being denied them. “If this is what they (the state soldiers) are doing to the indigenous peoples everywhere, this is tantamount to killing all of us,” Queron said.

He added that in their area, for example, if a giant company comes in for a “development” project, the indigenous peoples just automatically withdraw from its site. But with so many mining permits being granted by the government, Queron said, a growing number of indigenous peoples’ groups are now refusing to leave partly because they have nowhere else to go to. He decried the sad trend happening in the country where the indigenous peoples are being driven out of their land, cut away from their roots and source of livelihood.

In many indigenous peoples’ communities, the problem of lack of school rooms is often worse than the national average. In a forum this week at the House of Representatives with members of government peace panel and representatives from the panel of the National Democratic Front and the Moro Islamic Liberation Front (MILF), different groups of indigenous peoples cited how their school-age children have to travel far to go to school because there are no schools near their communities. In cases where there are grade schools, these offer incomplete grade levels. Some schools for instance only have rooms and teachers from grade one to grade two or three.

In the case of the indigenous communities of B’laan in Saranggani, Surigao del Sur, nuns and non-government organizations took pity on them and devised a literacy-numeracy school which, as Monico Cayog complained, were forced to close down this year after state soldiers branded the schools as being operated by the New People’s Army (NPA), and threatened its students and teachers. Cayog said soldiers also used one of these “lit-num” schools as a military detachment. Specifically, these schools are the ALCADEV and TRIFFPS in Han-ayan, Surigao del Sur, the Rural Missionaries of the Philippines Literacy Numeracy Program in Agusan del Sur and Bukidnon, and in CLANS in Sarangani. 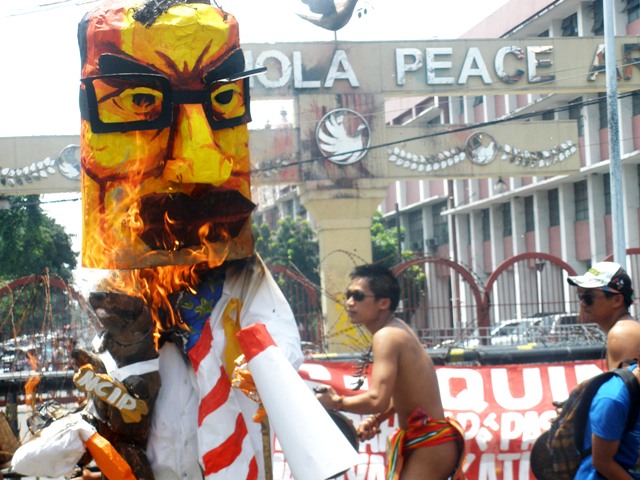 IPs danced around the burning effigy of a Pres. Aquino who is depicted as militaristic and deceitful.(Photo by Marya Salamat / bulatlat.com)

Health workers from CHESTCORE (Community Health Education, Services and Training) doing community health services in the far-flung areas of Cordillera have also reported military surveillance, threats and accusations that they are either members or sympathizers of the NPA.

August 9 is the international day of the world’s indigenous peoples, but the “occasion is a grim one as human rights violations and ancestral landgrabbing are rampant,” said Piya Macliing Malayao, spokeswoman of KAMP.

Wielding symbolic scales of justice weighing between “changed” and “unchanged”, leaders and representatives of various indigenous peoples group from the Philippines spoke of their condition now. They compared it to their plight under former President Arroyo which Aquino had promised to change. For every recounting of their situation, the tribesman or tribeswoman would place a “stone” on the scales.

By the end of their program at the Mendiola Bridge, the scale had tipped sharply at “unchanged.”

KAMP said Aquino could not fulfill his campaign promises until it abandons the same economic and military policies adopted by its predecessor. But based on the track being followed by Aquino, “as revealed in his Philippine Development Plan and Oplan Bayanihan,” Malayao said “there is no way he could solve the country’s chronic crisis.”

“The only way Aquino could live up to his fancy rhetoric is if he ceases to subscribe to imperialist globalization and state terrorism,” KAMP declared.