You Are Here: Home → 2011 → August → 21 → Ang Babae sa Septic Tank and its observations on indie filmmaking

Directed by Marlon Rivera and written by Chris Martinez, Ang Babae sa Septic Tank tells a story of aspiring filmmakers set to create a film worthy of an Oscar. Armed with a screenplay which depicts poverty in the country, they believe that their film will make it big internationally.

A pre-production meeting ensues as director Rainier (played by Kean Cipriano), producer Bingbong (played by JM de Guzman), and production assistant Jocelyn (played by Cai Cortez) brainstorm on how to go about their indie film entitled “Walang-Wala.” Set in an urban poor community, their film is about a mother named Mila who sells one of her many children to a pedophile to survive. They later get to meet the star, Ms. Eugene Domingo (as herself), who expressed her excitement in playing a lead role in an indie project. 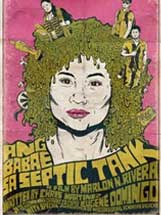 Different approaches regarding the execution of the script come up throughout the movie, as these were vividly presented from Jocelyn’s imagination. Turning it into a documentary drama was suggested, where the people who have actually experienced the story are intended to be characters. The story was also visualized as a musical, complete with the production numbers, and the slum community had a participation in singing about their lives’ desperation. A version of it in commercialized melodrama also appeared; aside from the over acting projected by the lead actress, the manifestations of product endorsements in every scene was also unmistakable.

But what Direk Rainier had in mind was a neo-realist film, and concepts such as images of squalor and shaky camera shots were mentioned. He believed his vision was clear as he strongly emphasized how he wanted the film to be realistic.

Rarely seen and recognized, Ang Babae sa Septic Tank puts the spotlight on indie filmmaking. Beneath the finished product projected in the big screen is a rigorous production process where a group of people put every single detail together in an attempt to make a film work.

In their meeting, the director and the producer found themselves discussing their respective opinions on various aspects of the film a couple of times. From the English translation of the film, to the poster design, to the casting, both had a different perspective on the matter and they ended up settling on a middle ground.

A satire of some sort, Ang Babae sa Septic Tank played around the general observations on indie filmmaking.

Remarkable caricatures were brought to life in the movie. At one point, the movie showed the probable effect of an international award to a filmmaker as it presented a pompous director who feels invincible after the achievement. And next, a blown up prima donna version of Eugene Domingo who is too eager to play the part in the project, even though it will not earn her money, as she believes that there is certain distinction to celebrities appearing in indie films.

More than the characters, the irony that goes with indie filmmaking was also presented. The filmmakers in the movie were so fixated on the subject of poverty, but with their comfortable lifestyles, they seem clueless about its real state. Blinded by their Oscars and Cannes dreams, they look at an urban poor community as a backdrop to their art.

Feeding on a criticism

There is no question in the hilarity and appeal of Ang Babae sa Septic Tank. An indie movie in its own, it was not meant to put shame on the indie scene. It just shows a side of a spectrum on the many things that happen inside the indie industry. Proving that indie films may take various shapes and sizes, Ang Babae sa Septic Tank strays from what seems to be a trend in indie filmmaking.