“We only learned about the fast-tracked evacuation and bidding plans after we got hold of a copy of the ‘not-for-circulation’ documents on the planned sale of Welfareville,” Romy Valenzuela, NACEMHEA –AHW President

MANILA – Social Welfare Secretary Dinky Soliman already has her hands full since she is heading the lead agency that is implementing the Aquino government’s flagship conditional cash transfer (CCT) program. Yet she still managed to make time for meeting with “stakeholders” last June 29 to plan the evacuation of the National Center for Mental Health (NCMH) and Correctional Institute for Women (CIW). The land where the two institution sit on is targeted for public bidding on July 2012. Soliman also heads the Welfareville Development Project.

But in the said meeting June 29, Soliman excluded the director of NCMH, the representatives of the health workers and residents of Welfareville. It is they as well as their thousands of patients who would be most affected by the sale, the union said.

“We only learned about the fast-tracked evacuation and bidding plans after we got hold of a copy of the ‘not-for-circulation’ documents on the planned sale of Welfareville,” Romy Valenzuela, National Center for Mental Health Employees Association (NACEMHEA) –AHW President, told bulatlat.com. He named Soliman, Mandaluyong Mayor Benhur Abalos and Finance Secretary Cezar Purisima, as some of the “stakeholders” in the Welfareville Development Project. He added that the document also indicated that the World Bank will provide technical assistance. 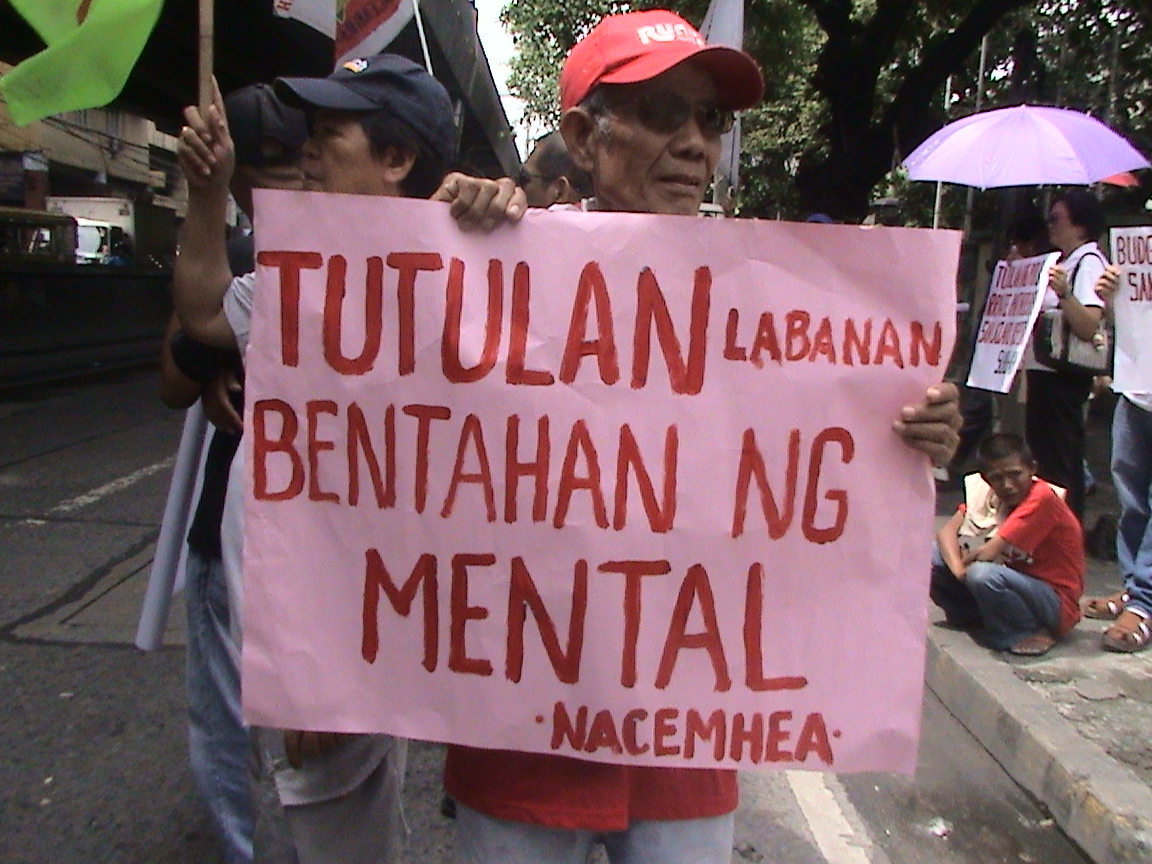 Mental hospital workers in this week’s protest in front of the DOH.(Photo courtesy of AHW / bulatlat.com)

Both the NCMH and the CIW should have been relocated and transferred before the sale of the 110-hectare land property in Mandaluyong City targeted by July 2012, according to the documents on the planned sale of Welfareville.

Welfareville Property is a 110-hectare land that includes the 44 hectares presently occupied by the NCMH and Correctional Institute for Women (CIW). The remaining area held several local government buildings including public schools, and houses of tens of thousands families.

Valenzuela noted that the names of Soliman, Purisima and Abalos had also been involved in the 2003 planned sale of Welfareville. It had stopped with the abrupt resignation of several Arroyo cabinet secretaries, now known as Hyatt 10. But now they’re back, Valenzuela said.

Last Friday, the union in the mental health center, supported by community organizations in Welfareville and other unions in the health sector, launched the “One Million Signature Campaign Against the Sale of Welfareville and Mental Hospital.” The one million signatures will be submitted to President Aquino, the Congress, and the Senate, the Alliance of Health Workers said.

This week (Wednesday), the health alliance and the employees union in the mental health center rallied in front of their “parent” office, the Department of Health.

“We’ve been issuing statements and holding mass actions to oppose the planned sale of Welfareville and the planned evacuation of the mental hospital to a smaller, hard to reach site. But we have not yet heard from the DOH,” said Valenzuela.

Last weekend the union officers drove to the supposed relocation site in Antipolo, Rizal. “It is situated on a mountain- very costly and difficult to reach,” Valenzuela said. The sheer drop in some parts of the remote relocation site could even pose danger to some mental patients who are already old or have suicidal tendencies, he said.

Armando Palaganas, vice president of the National Center for Mental Health Employees Association, said the proposed relocation site is a 10-hectare property in Barangay Inarawan, Antipolo City, which can accommodate around 1,000 patients only.

“This is so small compared to the current mental hospital’s capacity of 6,300 patients,” Palaganas told reporters. In a separate interview, he told bulatlat.com that the planned evacuation could also mean loss of jobs for some of the present 1,700 workforce of the mental hospital.

About 75 to 85-percent of NCMH patients come from Metro Manila, the union said. “If the families of poor patients are finding it difficult to afford a visit to the present Mandaluyong site, which is very accessible, how much more when the hospital is transferred to a remote area in Rizal?” asked Valenzuela.

“Our fight to retain the Welfareville property and Mental Hospital is also the fight of the Filipino people. This is a fight for our right to health, homes, jobs, and patients’ welfare,” he added.

Valenzuela told bulatlat.com that the health workers are also worried over a specification in the document on the planned sale of Welfareville stating that it would have “no political disturbance while the survey is going on.”