“This PPP scheme for education and health will cost the taxpayers more because the government must guarantee the private sector partners’ return on investment.” – ACT Teachers Party Rep. Antonio Tinio

MANILA – Groups under Kilos na Laban sa Budget Cuts condemned the brutal dispersal of their rally on Thursday, Aug. 25 in front of the House of Representatives. The anti-budget cut groups said they will file charges with the Commission on Human Rights against the Quezon City Police District and the security office of the House of Representatives for the brutal dispersal of the rally on Aug. 26, Friday.

“We were in the middle of our program in front of the House of Representatives when the police from QC station 10 and security units of the HOR assaulted us. Of course the people got angry— they were hitting us with metal rods and blasting us with water from a fire truck,” Merced said. 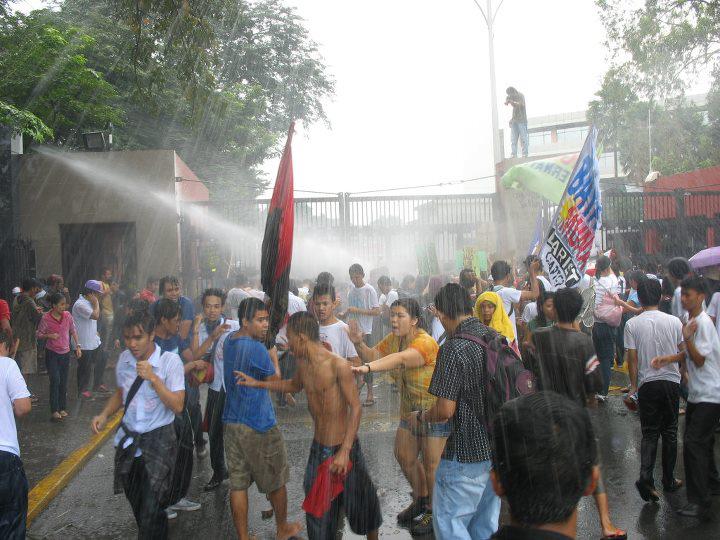 The protesters were brutally dispersed by the police and security forces of the House Representatives. Kilos na Laban sa Budget cuts are set to file charges with the Commission on Human Rights against the Quezon City Police District and the Security Office of the HOR.
(Photo by UP Kilos Na / Bulatlat.com)

The groups said they were peacefully holding a program when, without warning, the police stationed at the Congress main gate started hitting the protesters with their shields and truncheons. After that the police trained their water canon on some 300 protesters.

“In fact, majority of the protesters were caught unaware as they were still sitting on the road, some on the sidewalks, and listening to the program, when the dispersal began,” the alliance said in a statement.

The Kilos na Laban sa Budget Cuts had described Aug. 25 as the national day of action against budget cuts on education and social services. The groups are calling on the lawmakers to reject the proposed 2012 national budget because it contains both cuts and insufficient allocations for basic social services.
“After last year’s P1 billion ($23 million) budget cut for 97 State Universities and Colleges (SUCs), 50 SUCs will face a P500 million ($11 million) slash for 2012. Funding for basic education, health, housing, and OFW services are all severely insufficient,” the alliance said. ??On the other hand, the proposed budget contains huge funds for the presidential pork barrel, or the intelligence funds of the Office of the President, from P65 billion ($1.547 billion) to P161 billion (3.833 billion).

Aug. 25 was also the scheduled budget hearing of the Office of the President and the Department of Education (DepEd). Progressive legislators of the Makabayan coalition also joined the protest calling for higher budget allocation for social services like education and health.

“Aquino is blatantly abandoning the people. Budget allocations for education, health and other social services suffered hefty cuts and remained lacking while debt servicing, military, dole-out programs like the Conditional Cash Transfer (CCT), the President’s unprogrammed funds and legislators’ pork barrel budgets are being increased. This plus last year’s budget allocation is a very clear indicator of Aquino’s priorities,” said Merced.
The budget for CCT was increased by 86 percent or P18.3 billion ($435 million) while the budget for Public-Private Partnership (PPP) was also increase by P7.1 billion ($169 million). On the other hand, the budget for social services like education and health remains low. Merced added that the Aquino government is steadily decreasing subsidy for direct social services.

The budget for State Universities and Colleges (SUCs) was once again slashed. According to Alliance of Concerned Teachers, of the P1.816 trillion ($43 billion) funds for 2012 National Expenditure Program (NEP), only P21.8 billion ($519 million) is allocated to SUCs which is lower from the P P22.03 billion ($524 million) approved budget for 2011.

“This is far from the Commission on Higher Education’s (CHED) proposed consolidated SUCs budget of P49 billion ($116 million) which is based on the concrete demands of SUCs,” the group said in a statement.

According to Anakbayan chairman Vencer Crisostomo, of 112 SUCs, 51 received an accumulated cut of P583.69 million ($13 million) in the 2012 National Budget, pushing these SUCs to commercialize further.

“This is what Aquino wants for the future of the Filipino youth: inaccessible tertiary education and a rotting basic education system,” said Crisostomo.

Furthermore, there is a P250.9 million ($5.9 million) cut on the Maintenance and Other Operating Expenses (MOOE) of 45 SUCs; P403.3 million ($9.6 million) cut on Personal Services of 58 SUCs; and zero allocation for Capital Outlay of all SUCs.

According to ACT, this runs contrary to the supposedly increased budget for Personal Services for the year 2012 because of the implementation of the fourth and last tranche of salary increases of government employees as per the Salary Standardization Law 3.