“I was so afraid and confused. He is a priest; I attended mass and received communion from him. After that first time I saw that he was not at all what he showed the world to be,” she said.

She believed him to a be a man of God, but he turned out to be the one who would abuse and torment her.

Seventeen-year old “Leah” is currently under the protection and custody of women’s group Gabriela as she and her family begin their fight for justice against what has been done to her by a priest in Tubay, Butuan City.

The 17-year old girl is accusing 47-year old priest Fr. Raul Cabonce of repeatedly sexually abusing and raping her while she was under his care in his parochial residence in Butuan. Leah was one of Cabonce’s two wards. She began staying in the priest’s official residence after he made an offer to Leah and her family that he would help send her to school. A mutual acquaintance and Leah’s neighbor facilitated Leah’s transfer to the priest’s parish.

In a detailed affidavit, Lead described in full and incriminating detail how the priest began to show interest in her and how the interest escalated to sexual abuse and rape. According to Leah. Cabonce first abused her on September 2010. 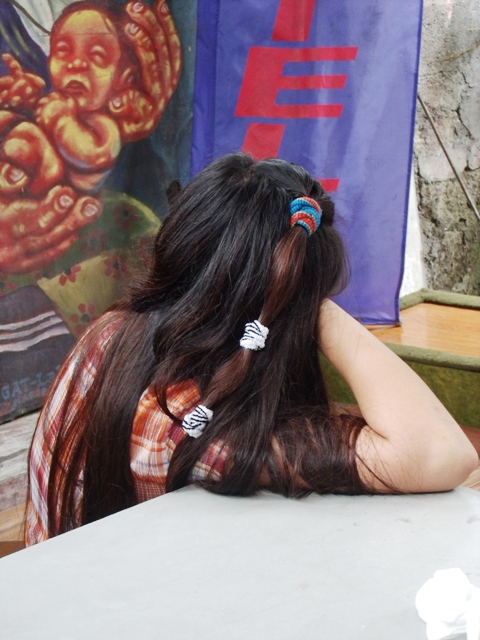 Seventeen-year old “Leah” wants her abuser and rapistpunished so “He won’t do what he did to me to other children, other women.” (Photo by Ina Alleco Silverio / Bulatlat.com)

It was not the first time that Leah saw the priest conducting himself in such a way.

“I had previously seen him touching Rachel (not her real name); and when seated he would pull Rachel to his lap and touch her just about everywhere. I felt very uncomfortable and ill whenever I saw him do that to her, but I was afraid to say anything.”

When she brought it up with Rachel, the 20-year old told her that “it didn’t matter.” She told Leah that she and her family were very indebted to the priest for all the help he had given them since Rachel was a fifth grade student.

Leah said she first believed that what Cabonce did to her did not really mean anything and so she resolved to put it out of her mind. Her hopes that it would not be repeated were immediately put to an end by February 27, 2011 when Cabonce made further advances.

On that date, Cabonce made Leah give him a massage and ,in the process, forced her to have oral sex. The minor was almost paralyzed with fear especially after the priest allegedly threatened to kill her and her family if she said anything to anyone about what happened. The priest reportedly owns three guns — two of them short arms, and Leah has seen all of them.

“I was so afraid and confused. He is a priest; I attended mass and received communion from him. After that first time I saw that he was not at all what he showed the world to be,” she said.

Leah also found out that the priest has a girlfriend, supposedly an older girl who attended college also in Butuan. She often saw the girl in the convent and she stayed with the priest in the parish house.

“There was also a time when I was able to read the sent box of her cellphone and I saw also Fr. Cabonce’s messages to her. It was obvious from the messages that they have a relationship,”she said.

Leah and Rachel by then had practically ceased to have contact with the outside world. Whenever Cabonce was in the parish, he ordered them to stay indoors and not communicate with anyone, not even through their cellphones.

“Mostly Rachel and I stayed in our rooms. I didn’t like to leave my room whenever he was around because I was afraid he would do things to me,” she said.

While Cabonce liked to call Leah his “scholar” because he paid for her tuition, the priest did not give Leah or Rachel any allowance. All their other needs for school the girls and their families had to shoulder themselves. Leah cooked, cleaned the residence and washed the priest’s clothes, including his heavy sutana.

“There were even times when we ran out of rice or food, and Rachel and I would practically fight each other so that one of us would go to Fr. Cabonce to ask for money. I hated asking him for anything because going to him meant being treated dirty,” she said.

Leah said whenever she was unfortunate enough to be the one to ask the priest for money, the man would take her hand and rub it against the front of his pants before giving her the money.

The sexual abuse continued but reached the worst point on March 3 and then on March 14. Again during both incidents the priest allegedly made Leah give him a massage and then proceeded to paw at her, touching her all over and then forced her to do oral sex. Afterward, he said, he pulled off her underwear and forced a finger inside her. The girl cried throughout her ordeal but was too afraid to fight back because the priest kept threatening to kill her.

“I kept telling him to stop, to have pity on me but he didn’t listen or care. I cried but he just told me to keep quiet and not to tell anyone,” she said.

When asked why she didn’t immediately leave or sought another adult’s help, Leah said, she wanted to finish the school year first.

“I was doing so well in school and I didn’t want to drop out. I told myself I would just finish the school year and then leave. My education is very important to me; I’ve always wanted to be a doctor or a journalist someday, and I knew I had to finish high school first,” she said.

Despite her ordeal, Leah is determined to fight for her rights and secure justice against her rapist. When asked what she would say if the priest denies all charges she has made against him, she shrugged her small shoulders and said simply, “He might win any case on earth, but he can’t lie to God. He will still end up in hell for what he has done.”