Guiltless? An activist on vacation

An activist’s life can be aptly compared to a dog—a working one. This is truer to full time activists and truest if he or she is a Third World progressive. Sometime soon muscles knot and pain killers are popped like candies to enable tired bodies to even stretch out on the bed at the end of the day.

The first may be easily answered with airline promos and cheap packaged tours. The second needs a more detailed telling.

My wife and I spuriously agreed to tag along with my sister’s posse on a packaged tour bought six months prior. August being a tourism “off season” in the Philippines the price for the entire vacation package became affordable somehow. And so on a rainy weekend we packed a bag each and flew to Bohol with seven other giggly girls who organized everything but some of the meals.

The province of Bohol is tourism slick, despite a surprisingly small airport terminal at its capital Tagbilaran City. It does have a bigger sea port terminal that could handle more traffic. But whatever advantage this must have is drowned by fees every step of the way. The unaware could be charged with portage without being informed that small bags could be waved through. The baggage x-ray machine was broke when we were there.

But these shortcomings and nuisances are offset by Bohol’s enthusiastic army of hospitality workers front-acted by tour guides who drive brand-new people carrier vans. Our guide Jonald even had ready alternatives to minor predicaments—such as our hotel’s check-in time being six hours away from our arrival. He took us to a tour of Bohol’s Panglao Island which would have delighted anyone, save the activist couple in the group who see things slightly differently than the rest. 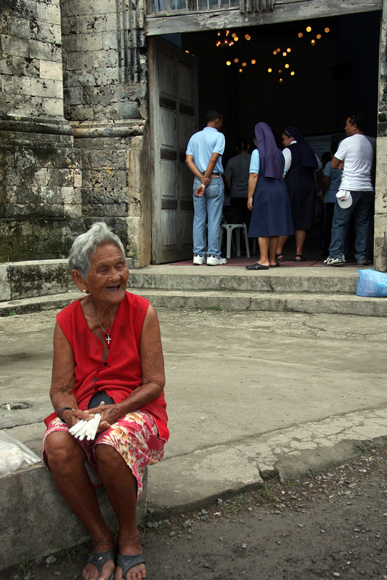 Our first stop was the age old Dauis Church, built by the Jesuits in 1697. The church boasts of a well near the altar with water that, according to the guide, could cure illnesses. This got everyone a bit excited but my wife and I who proceeded to just take pictures of the church and convent exteriors. And while we quarreled about who would take pictures of the coffee-pot shaped watchtower at which angle, the rest of the group took pictures of each other in hundreds of poses. I think we were also the only ones who took pictures of the locals and read the historical marker.

After our first Bohol church, Jonald wanted to bring us to the house of a 65-year old who reportedly still looks like a child. I must have been unfair to the rest of the group when I immediately and unilaterally vetoed the idea. I must have been unfair to the man-child also as tourist “donations” just may be his only income. But I believe this is exploitative and I did not want to feel very sorry if I see him (as I’m sure I will). Fortunately, no one objected.

I was not as lucky with our next stop. Our guide took us to a mini zoo whose main attraction was a good-sized reticulated python that was being scrubbed with a hard nylon brush when we arrived. Its caretaker was inside its cage who proceeded to sit on the snake to show how harmless it really is. I don’t like snakes but I don’t want to see them in cages either. But the real heartbreaker was the plaintive cry of the zoo’s birds, specifically a hornbill that was by his lonesome at a dark corner. I tried masking my sadness by hassling group members who were so afraid of snakes they could not even look at it from a distance. I could not leave the place early enough.

I was happy with our next stop: the Hinagdanan Cave. It is a small cave that boasts of a natural pool at its main section. The cave is merely 30 meters away from the beach and the porous limestone in the area ensures that the water is regularly replenished and remains clean. The pool is 12 feet deep and the bottom can be seen despite the gloomy interior. The grotto has two manhole-sized skylights that were the cave’s original entrances until another hole was exposed when an old tree was felled by a typhoon. The third hole is now the main entrance with rather steep wooden stairs installed that aid tourists as they enter and exit the cave. The stairs is where the cave gets its name—Hinagdanan (“where stairs were constructed”). The cave itself is a delight, but its tour guides were remarkable. They have funny spiels and they can reset DLSR camera settings to take good photos of tourists.

Our next stop was the Shell Museum, which was a real bonus. The owner is no poseur as he himself has discovered two shell species, both of which were named after him. He was not academically-trained but a real enthusiast who could tell stories about his favorite subject all day. This museum’s piece de resistance is a lone sample of the world’s smallest shell that could only be found in very deep waters surrounding Bohol. There are only two shell museums in the country and Bohol’s own has a more comprehensive collection than the one in Batangas. The activist in me wanted everyone to listen to the old man but, clearly, no one was as interested as I. All the girls were already at the shop next door while I was still asking questions.

Our next stop was the church of Panglao, which boasts of a grander watchtower. It is off limits to those who want to climb it because it was damaged by World War II bombs. Again, my wife and I were more interested in taking pictures of the structure than of each other. 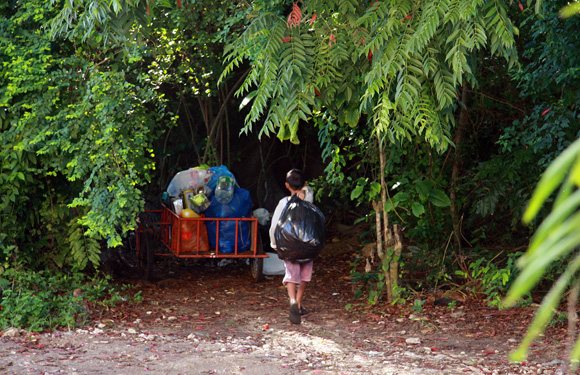 A scene that tourists work hard not to see. 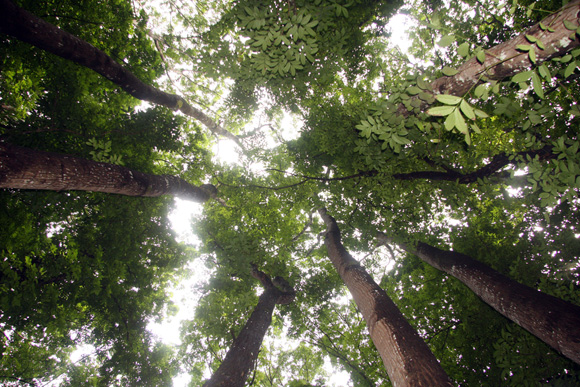 Bohol Bee Farm was the last stop of the day’s tour and it was where we were at sync with the rest of the group. We all enjoyed its organic ice cream, generously heaped on crispy cassava cones. Its healthy treats are all delicious and honey-sweetened. And while its guide’s spiels and the site tour were a bit hurried the place is simply beautiful. It has clean bathrooms too.

We then checked in at our hotel which, for the amount we paid, is well worth it. Not all rooms had windows, which was my only beef about the place. The hotel’s swimming pool and courteous staff adequately counterbalanced the inconvenience though. Plus, it is a short walk away from Panglao’s most famous public beach: Alona.

Count on an activist to conduct social investigations wherever he or she is and whatever the circumstance. Vacation or not I could not help but notice how deferential the people are to the many foreigners and how many old white men walk around with nubile Filipinas. I also observed and heard that quite a number of local tourists are call center workers. Bohol’s tourist demographics are no different. An activist would also be the first to notice the local children who would grab the garbage bags as soon as restaurants take them outside. I even peered through mangrove thickets to see how they rummage through the garbage in search of whatever they could resell in junk shops. These are scenes regular tourists try very hard to ignore but we activists could not help ourselves.