MDT, ‘license for US direct intervention’

MANILA — “Confirmed reports” about the deployment of US special operatives in Iraq, Afghanistan, the Philippines and probably on the ground in Libya, too, abound in newspapers, said Roland Simbulan, an expert on US-Philippine relations. These special operatives, he said, “are actively involved in military operations on so-called war on terror. Some of them are still roaming Mindanao today.”

American soldiers deployed in Mindanao have escorts from the AFP, and they roam its environs fully armed. They don’t recognize Philippine laws that disallow the carrying of deadly weapons in public places and establishments. US troops in Mindanao were sighted and photographed carrying high powered rifles inside malls and in the vicinity of banks. .

Intelligence-gathering US operatives also often join the US-funded “humanitarian projects” being implemented in the Philippines, for example those targeting Mindanao.

Simbulan said US intelligence forces here have a wide scope of operations due to Mutual Defense Treaty (MDT) and its attendant military agreement. He said their operations are apparently not just focused on Abu Sayyaf. “They’re dealing with the top echelons of the AFP which is involved in counterinsurgency. And they’re training Filipino soldiers who are used against Filipinos.”

There had been reported sightings in AFP camps of US troops. In Camp Aguinaldo alone in Metro Manila, Simbulan said, there seem to be a regular presence of US troops. 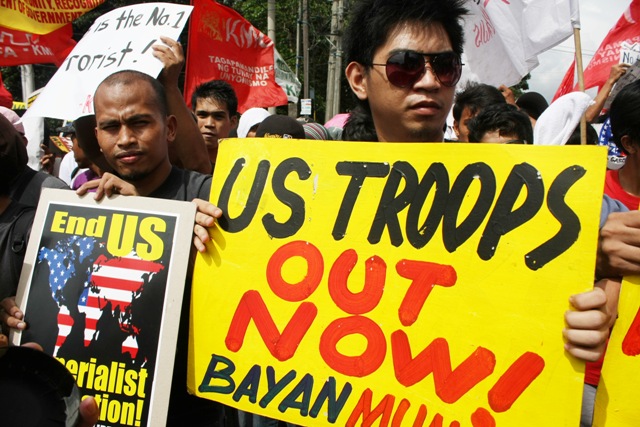 Activists protest the continued presence of US troops despite the Philippine rejection of US military bases.(Photo by Gregorio B. Dantes Jr. / bulatlat.com)

There had also been military joint operations where US troops were revealed to be active participants, for example in the shooting in Basilan of Buyong-buyong Isnijal by an American soldier. Another revealing incident was the case of James Mehring who, in 2002, triggered a bomb explosion in his room in Davao city. Mehring, a suspected CIA operative, was able to avert questioning by local officials when he was spirited out of the country by US officials.

Bayan-SMR criticized, in a rally three years ago, the existence, for example, of the existence of the US-headed Joint Special Operations Task Force-Philippines (JSOTF-P) in Camp Navarro which is the camp of the AFP’s Western Mindanao Command in Zamboanga City. The group called on the Senate to investigate “what appears to be a permanent basing of the US troops in Mindanao.”

Rebel soldiers who took over the Oakwood hotel in 2003 had revealed various US-AFP cooperation in military operations and the series of bombings in Mindanao.

In an interview with DZRH early this year, two Oakwood mutineers who took part in an operation that resulted in the killing of an Abu Sayyaf leader, recalled that US troops and its sophisticated surveillance equipment had been crucial in pinpointing Abu Sabaya’s exact location. The former soldier also revealed that US troops were not only present in the operations providing logistics, they were also decisive even in the matter of disposing of Sabaya’s body. They reportedly left it at sea, to prevent Sabaya’s likely tomb from being a shrine of some sort.

In 2005, when Henry Crumpton, the coordinator for counterterrorism at the U.S. State Department, visited the Philippines, he praised the administration of then president Gloria Macapagal-Arroyo for its campaign against terrorism, particularly the Abu Sayyaf.

In a press conference at the time, Crumpton declared that “U.S. and Filipino forces worked together” in Basilan “to eradicate Abu Sayyaf Group havens on the island through a combination of civil-military operations and improved counterterrorism coordination.”

Peoples’ organizations in conflict areas where the Balikatan exercises were being held, such as in Mindanao, Central Luzon, Bicol and other regions, attest to the fact that these are no ordinary exercises they were holding there, but different aspects of counter-insurgency operations, intelligence-gathering and other “winning the hearts and minds” alleged development projects.

When Nancy Gadian turned whistle-blower against the corruption in the Armed Forces of the Philippines, she also revealed the arrogance of the US troops in the Philippines who treated even some of the Filipino soldiers like second class citizens even in their own military camps.

The Philippines can still continue to get military assistance even without the MDT, Satur Ocampo said. He urged the government to look more into other multilateral assistance venues, for example in dealing with the present problem at Spratlys. Ocampo warns against the danger of clinging to a defense treaty with the US, which, he said, will not respond anyway when the need arises. “We can’t expect US to attack China,” he said.

The calls to abrogate the MDT are even more valid today, critics have been saying since June this year.

“Why not create a new agreement altogether?” Simbulan asked, fearing that if the two parties merely attempted to revise it, they might only “put in provisions to strengthen the justifications for the existence of the likes of VFA and MLSA.”

The best to do is abrogate MDT first, Simbulan emphasized.

He suggested another possibility for initiating an agreement, this time with a different purpose. “It can be an agreement related to environmental disasters, not necessarily involving US troops,” said Simbulan. After all, he reasoned, “You don’t need these special operations forces to help during natural disasters. Their specialty is not natural disasters; they’re specialist in combat warfare and undermining stabilities of countries.”

Simbulan said the US has civilian agencies for natural disaster and environmental protection which the Philippines may better work with instead of the US troops. He added that especially now, “the so-called grave threats to our security have more to do with calamities brought about by global warming.” He urged the Philippine government to focus more on this, “rather than on introducing foreign troops here which only fuel more instability.”

Simbulan also cited as reason for abrogating the MDT its use “as springboard for military intervention.” The US forces in Philippine ports have regional roles, which is why for the US the MDT with the Philippines has regional and global importance, he said. They played that kind of role during the time they have bases here, he added, for example during the Vietnam War.

Simbulan warned that with the MDT, “We would get entangled when US attacks other countries. He added that it will make us vulnerable to potential attacks, as the US enemies who may not necessarily be our enemies may target the US forces stationed here, effectively embroiling us in what should have been just a US conflict.