“This treaty and the US have not really helped in AFP modernization. It only enhanced its dependence and derogated Philippine sovereignty.” – Satur Ocampo

MANILA — The RP-US Mutual Defense Treaty (MDT) is said to be the “mother of all unequal military treaties and agreements” the Philippines has entered into with the US since achieving independence in 1946. In its 60 years of existence, it has proved useless for the Philippines, said various critics. For Satur Ocampo, president of Makabayan, the MDT’s call to respond or assist each other, “subject to Constitutional processes,” has not been tested until 9/11. But he noted that the US did not invoke the MDT even then, as it had called for a “coalition of the willing instead.” Yet, the MDT remains in force up to now.

According to geopolitics expert Prof. Roland Simbulan, some examples of the unequal agreements inked to “operationalize” the MDT are the US-RP Military Assistance Agreement which was renamed into US-RP Military Advisory Group in the 50s, the Visiting Forces Agreement and the Mutual Logistics Servicing Agreement. He said the US military bases agreement, the renewal of which the Philippine Senate rejected amid a strong campaign for its abrogation conducted by progressive groups twenty years ago, in 1991, also traced its roots from the MDT.

(Read: A symbol of subservience, a milestone in the struggle for national sovereignty)

Satur Ocampo recalled that in 1991 when the Philippine Senate disapproved the extension of the military bases agreement, there were proposals already to abolish the MDT because it is “not applicable anymore.” 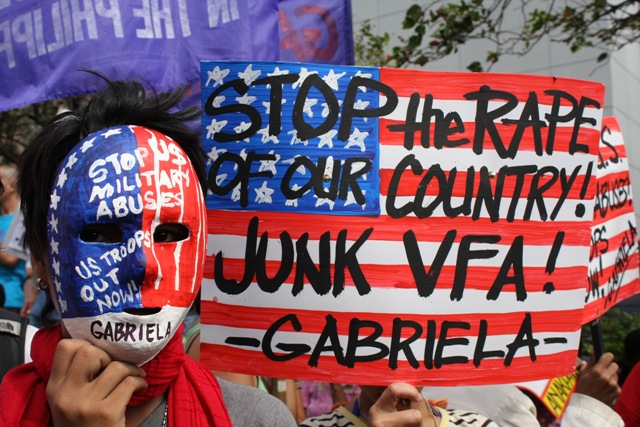 Activists marked the 20th anniversary of Senate rejection of US military bases.(Photo by Gregorio B. Dantes Jr. / bulatlat.com)

But the senators who claimed to support proposals to abrogate the MDT did not push for it. The neglect allowed for the drawing up of the Visiting Forces Agreement (VFA), which the Senate approved in 1999. Ocampo recalled that the “proponents of the presence of US military troops here had used the MDT to approve the Visiting Forces Agreement (VFA). He described the VFA as “an extension of the MDT.” Progressive organizations dubbed the VFA and the MLSA as agreements that circumvent the earlier senate rejection of the bases extension.

The MDT was invoked recently by Malacañang when the Spratlys issue heated up, said Ocampo. But the fact that current President Benigno “Noynoy” Aquino III had to ask for US military assistance to bolster its confidence in asserting territorial claims over a group of islets also revealed the weaknesses of the country’s armed forces, thus reviving as well the calls to abolish the “useless,” “no longer applicable” MDT.

“The demand to abrogate the MDT is still valid,” Satur Ocampo told Bulatlat.com, explaining that the criticisms on MDT also remain valid today: “This treaty and the US have not really helped in AFP modernization. It only enhanced its dependence and derogated Philippine sovereignty.”

No gains for Philippines, only losses and instabilities due to MDT

The MDT and the military agreements it engendered have tied down the Philippine armed forces to the “consent,” sourcing of materials, logistics and equipment, trainings and advice of the US military, according to Simbulan.

When the MDT turned 60 last August 30, Victoria Nuland, spokesperson for the US Department of State, praised the US-Philippine Mutual Defense Treaty for still serving as “cornerstone of our relationship and a source of stability in the region.”

But while it has been helpful to US interests in projecting its military might in the region, it has not been that helpful to the Philippines. When asked to list the Philippines’ gains in 60 years of MDT, Simbulan said “there is really none.”

He blames the MDT, in fact, “for making the AFP the weakest in ASEAN today.”

Under the MDT, Simbulan said, the US gives the Philippines from time to time “grants in the form of old ambulances, old Huey helicopters, fighter and cargo planes, which the US had used extensively during the Vietnam War, and for which no more parts are being manufactured.” As such, the AFP was forced to try to copy the needed parts but these often do not last. Simbulan said this explains the crash of many AFP choppers and planes, killing soldiers and generals with it.

If these military grants and aids had been any good, after 60 years the AFP should have been a modern armed forces. “But up to now it still lacks external defense capabilities. The Air Force has flying coffins. The Navy has floating coffins. And that’s what the US evidently wanted— that we are entirely dependent on them,” said Simbulan.

“If the intention of the original MDT was to modernize the AFP, then it has utterly failed,” Simbulan told bulatlat.com. Comparing the AFP to the armed forces of member countries of the ASEAN, “the AFP is lagging behind even compared to Brunei in terms of defending external stability,” explained Simbulan.

He said this situation where the Philippines is gravely dependent on the US is where the US evidently wants the Philippines to be. Simbulan cited as proof the fact that the Philippine military agreements with the US, tracing its roots from the MDT, “are actually what’s constraining the AFP from really developing and modernizing itself so it can really defend the Philippine territories.”

The Mutual Defense Treaty is “very general.” It is a framework that binds two signatory countries without expiry, until one of the parties serves notice to the other that they want to get out of it, said Simbulan. In the Philippines, there had been calls in the past for the government to get out of the said treaty especially during the times when the Philippines needed US support and the latter indicated that it would not respond unless the situation endangers its own interests.

The most recent calls for abrogating the MDT were aired last June by progressive organizations, when earlier pronouncements of the US embassy in Manila hinted that it would keep a hands-off policy in the dispute between the Philippines and China over the Spratlys islands.

So far, according to Simbulan, the most “significant act of asserting sovereignty” the Philippines had done in its military relations with the US was when its senate voted against renewing the US military bases agreement in Sept 16, 1991, twenty years ago today, or after 40 years of MDT.

At the time, Simbulan recalled, the pro-bases advocates who argued for its retention, including the late president Corazon Aquino, the current president’s mother, cited how “terminating the bases agreement is tantamount to killing the MDT.” The arguments revolved on the bases treaty being an example of “operationalizing the mother treaty,” which is the MDT. The same line of argument would later be used in justifying the VFA and MLSA, Simbulan also noted.

(Read: MLSA: Laying the bricks of a bigger strategy)

The MDT has very specific provisions for having a military advisory group that would take care of arms and other grants, which the US would hand over to the Philippines as a “treaty partner.” Simbulan said these consisted mostly of “turnover of second-hand military arms and equipment, virtually US junks donated to its allies, like the 45-year old refurbished battle ship” that President Noynoy Aquino welcomed with glee last month. Because these military equipment are mostly already old and heavily used, the Philippines has to spend a lot in refurbishing, repairing and maintaining these, said Simbulan.

He suspects that the newly arrived World War II battleship, for example, is more likely a “floating coffin.” The said battleship docked in Philippine shores this August as a result of the announcement made by the US Embassy in the Philippines late last June promising to stand by its “treaty partner” with regard to the Spratlys dispute. Based on US official pronouncements, though, this promised “support” is not exactly providing direct military action as promised by the MDT, but helping to arm or modernize the Philippine armed forces by selling arms and equipment to the country.

“Why are we happy with those equipment? If we are going to spend on it, why don’t we buy new ones instead?” asked Simbulan. The US “donation” of a battle ship to the Philippines cost the country millions to make it operational and bring it to Philippine shores.

The RP-US military assistance agreement has as one of its “most objectionable provisions” US control over the acquisition of arms and equipment by the Philippines.

“We can’t buy military equipment from another country unless approved by the US,” said Simbulan. He blamed this constraint for why up to now, the source of Philippine military weaponry is mainly the US, and sometimes Israel (such as the Uzi submachine gun), when “we could have saved our dollar reserves if we bought from China or Russia, where it’s cheaper and more powerful.”

Another objectionable provision in the RP-US military assistance agreement, said Simbulan, is that “the AFP cannot get military trainers from other countries unless approved (or with consent) by the US government.”

The dilly-dallying of the US over whether or not it would support the Philippines in its dispute with China over the Spratlys Islands was not the first time the MDT proved useless.

Earlier, the MDT had been “tested,” Simbulan said, “when we had problems with Malaysia over Sabah (in the 60s).” But US officials said at that time that they will not use the MDT to assist the Philippines in case it was attacked by Malaysia. That’s because Malaysia is also a US ally, explained Simbulan.

Simbulan recalled how the AFP has “created” a bigger, bloodier Moro war in the South when it massacred a batch of Muslim soldiers it had trained, after the trainees refused to participate in the Philippines’ planned attack on their fellow Muslims in Sabah. “One of the victims managed to swim away. He survived to tell the tale,” said Simbulan. Now known as Jabidah massacre, Simbulan attributed to it the rapid growth of then separatist Moro National Liberation Front (MNLF).