In a press conference in Quezon City on Wednesday, former Lt. Senior Grade Mary Nancy Gadian said US troops gather intelligence information – through the use of special intelligence equipment – and participate in the planning of combat operations.

MANILA – A former officer of the Philippine Navy has corroborated reports and speculations that American troops in the Philippines, particularly in Mindanao, take part in combat operations.

In a press conference in Quezon City on Wednesday, former Lt. Senior Grade Mary Nancy Gadian said US troops gather intelligence information – through the use of special intelligence equipment – and participate in the planning of combat operations. The Philippine Constitution prohibits foreign troops from engaging in combat inside the country.

The US troops in the Philippines, Gadian said, also join actual operations against “insurgent” or “terrorist” groups. “They help in ‘neutralizing’ high-profile targets,” Gadian said. 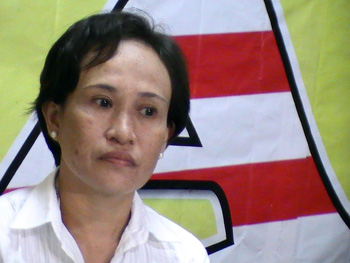 Gadian is the same Navy officer who, last May, exposed the alleged malversation of P46 million for the Balikatan military exercises in 2007.

Gadian’s latest statements came days after the New York Times reported on the announcement of US Defense Secretary Robert Gates that a 600-member elite force of US troops are to stay in the Philippines.

Operation Enduring Freedom is the official name given to the US government’s military response to the terrorist attack of Sept. 11, 2001 in New York City. It entails a series of anti-“terrorism” activities in Afghanistan, the Philippines, the Horn of Africa, Trans-Sahara, and Pakinsi Gorge.

Col. Bill Coultrup, JSOTF-P commander, has also admitted that the elite force has been involved in “combat-related” operations. This, he said, has consisted of “(helping) the Armed Forces of the Philippines neutralize high-value targets – individuals who will never change their minds.”

Based on a fact sheet posted on its website, the JSOTF-P maintains its headquarters within the AFP’s Camp Navarro, which is located in Zamboanga City. It also has three regional task forces throughout Mindanao, working with the AFP: Task Force Archipelago, also based at Camp Navarro; Task Force Mindanao, based at Camp Sionco, Maguindanao; and Task Force Sulu, based at Camp Bautista, Jolo Island, Sulu. A number of JSOTF-P personnel also work in Manila, coordinating activities with the US Embassy and the AFP General Headquarters.

The same fact sheet also states that “the US shares intelligence data and other information to assist the AFP in planning future operations.”

Art. XVIII, Sec. 25 of the Philippine Constitution provides that:

“After the expiration in 1991 of the Agreement between the Republic of the Philippines and the United States of America concerning military bases, foreign military bases, troops, or facilities shall not be allowed in the Philippines except under a treaty duly concurred in by the Senate and, when the Congress so requires, ratified by a majority of the votes cast by the people in a national referendum held for that purpose, and recognized as a treaty by the other contracting State.”

Government officials supporting the continued stay of US troops in the Philippines have claimed that the Visiting Forces Agreement (VFA) allows their prolonged presence in the country. The VFA, however, is not recognized by the US government as a treaty.

Gadian said the “meddling” of US troops in Philippine affairs “shows that they have no intention to leave.”

Gadian, however, is of the view that they should go. “They are not needed here,” she said.

She pointed out that seven years of continued US military presence in Mindanao have not done anything to solve the peace-and-order problem in the area.

“There has been no end to it because they don’t want to end it,” she said. “So many soldiers have died there, who didn’t have to die if only there was resolve to end the problem.” (Bulatlat.com)