The transport groups issued the announcement amidst efforts by Malacañang to scuttle and threaten the planned strike of the transport sector against oil overpricing, taxes, numerous fees and penalties.

MANILA – A day after the “disappointing” dialogue with President Benigno “Noynoy” Aquino III in Malacañang, the Pagkakaisa ng mga Samahan ng Tsuper at Opereytor Nationwide (Piston) and other transport groups in Metro Manila and other regions declared that they will push through with their planned strike on Sept 19, Monday.

The transport groups issued the announcement amidst efforts by Malacañang to scuttle and threaten the planned strike of the transport sector against oil overpricing, taxes, numerous fees and penalties.

San Mateo said they attended the dialogue in Malacañang “with an open mind.” But President Aquino left them with no choice but to proceed with their planned strike, as Aquino gave “no concrete response” on their demand for a rollback in pump prices to correct the oil overpricing, to scrap the oil deregulation law, suspend or scrap the value-added tax on oil products and toll fees. Aquino’s response boils down to “open-ended, very general promises to review” the said issues, said George San Mateo, secretary general of Piston, in a press conference in Quezon City.

Aquino’s response of ordering a “review” of the Downstream Oil Industry Deregulation Law is not yet the worst of it, said San Mateo, because it “aims to strengthen, and not scrap, the oil deregulation law.”

This is so way off the transport sector’s demand, San Mateo said. Piston and other transport and progressive groups have blamed the oil deregulation law for “allowing the Big Three oil cartel to raise prices of petroleum products without any government control.”

The Aquino government wants to “improve” competition in the oil industry when competition itself is just an illusion, given that up to 80-percent of the market is cornered by the Big Three, San Mateo reportedly told Aquino during the dialogue. The transport leader also cited a study of a private citizen, Mr Marcelo Tecson, who once worked with the government’s Oil Price Stabilization Fund. Mr Tecson, San Mateo said, has been writing the energy department about “the myth of the oil deregulation law’s promises to bring down prices and the fact that the government can revert to oil price regulation without needing subsidies.” 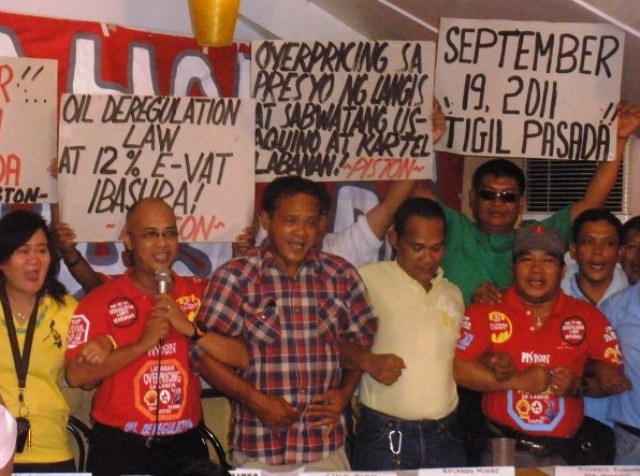 Leaders of Piston and allied organizations urged the public to support the transport strike slated on Sept.19. (Photo by Marya Salamat / bulatlat.com)

San Mateo shared with the media that he brought that study to President Aquino’s attention to let him know that even an experienced former government employee has been writing the energy department about the practicality and soundness of scrapping the oil deregulation law to protect the “hapless” Filipinos against excessive profit margins of the oil companies. Based on data given by experts contracted by the government itself, Tecson estimates the huge leaps on oil companies’ profit margins with the implementation of oil deregulation law.

San Mateo belied the claim issued by Energy Undersecretary Jay Layug to the media right after the dialogue that Piston allegedly suggested amendments to “strengthen” the oil deregulation law. “Mr. Layug twisted my words,” said San Mateo, “or perhaps he is just weak of hearing.”

San Mateo said that during the dialogue, he also urged President Aquino to declare as priority at least three bills in Congress seeking to solve the problem of oil overpricing and the Big Three oil cartel. One of these, authored by Anakpawis Partylist Rep. Rafael Mariano, proposes to scrap the Oil Deregulation Law; the other two, separately authored by Bayan Muna Rep. Teddy Casiño and Rep. Rufus Rodriguez, propose to go back to oil price regulation, with attendant setting up of mechanisms for the government to actively be involved in oil trading and pricing.

“We did not ask the Aquino government to strengthen the oil deregulation law, we asked them to scrap it,” stressed San Mateo.

President Aquino reportedly promised to just review the transport sector’s complaints about single-ticketing system and prevalent system of exacting “kotong” (legal and illegal fees and penalties) from public utility drivers. All these eat up into the drivers’ earnings, they complained.

“The Department of Transportation and Communication’s order no. 38 which raised and expanded fees and penalties was discussed but not concretely resolved either,” said San Mateo, adding that it was a pity because DOTC Secretary Mar Roxas was present during the dialogue.

“Even the issue of fuel switch which some of our fellow transport leaders from other transport groups had desired, and for which they now backed out of our previous unity to conduct a strike, really got no clear response,” San Mateo said in the press conference.

He quoted the president as saying that the issue of repowering public utility vehicles from diesel to natural gas is “a step-by-step process” which Aquino or other members of the government at the dialogue did not give a clear time-frame for doing.

In a separate press conference arranged by Roberto Martin, president of Pasang Masda, he said the Aquino government promised them assistance in converting 100 vehicles per transport organization from diesel to natural gas. Martin defended his group’s backing out from their Sept 9 pact with Piston and other transport groups to launch a strike, saying they are already “satisfied” with what they got from the dialogue.

Martin also said the fuel switch is a “long-term” solution to oil deregulation law. But PISTON’s San Mateo countered that it is illogical for a genuine transport leader to lead his or her members to a fuel switch if the oil deregulation law remained. The oil companies who also monopolized the processing and selling of natural gas could also just jack up its prices when the demand for it suddenly increases, explained San Mateo. He recalled that the same thing happened when they were persuaded years ago to shift from gasoline to diesel.

For Piston, Proton, Starter, Sparkplug, Luzviminda and allied drivers from Makati and Pasay, the dialogue with President Aquino yielded “nothing solid or concrete to hold on to.”

“The president did not even consider tagging as priority the bills in Congress seeking to scrap the oil deregulation law,” said San Mateo. Neither did Aquino announce an “immediate relief of P7 to P9 oil price rollback at least,” he added.

San Mateo said that if the Aquino government is really sincere in helping the country’s drivers and motorists and the riding public, he could at least suspend the imposition of VAT on oil products and the looming VAT on toll fees. “That is very much within the government’s control,” said Rolando Mingo, president of Starter. Mingo said that just removing the 12-percent EVAT on oil would mean better income to drivers in a long working day and consumption of an average of 25 liters.

“There is no reason to cancel or postpone our planned strike; we will push through with the transport strike even if other transport groups who earlier vowed to join had backed out,” said Liza Lorenzo, president of Luzviminda, a nationwide alliance of drivers and operators of multi-cabs, jeepney and FX/AUVs.

Lorenzo said they will join the Sept 19 transport strike because the government should learn “how painful the situation now is for drivers and operators.” She said their strike is actually for the welfare of drivers, operators and the riding public.

“It no longer matters now which transport federation the drivers belong to,” said Mingo, president of Starter, a regional transport alliance from Southern Tagalog. He explained that demanding an end to “proven oil overpricing” and “scrapping the 12-percent EVAT on oil products “affect every Filipinos.”

“This is everybody’s problem, we just happened to be working in transport that makes us one of the first to feel the pinch of oil price hikes,” said Mingo.

“Barring calamities, the strike will push through,” said San Mateo. He called on the public to understand and support the transport strike, “because if we don’t do it, we would all be worse off.”