You Are Here: Home → 2011 → September → 24 → Witnesses recount abduction of UP students by military

Witnesses recount abduction of UP students by military

“The abduction could not be carried out without Palparan’s knowledge,” Olalia told Bulatlat.com in an interview shortly after the hearing. “They [soldiers] were all under Task Force Malolos. It’s a conspiracy. His men would not act without his knowledge.”

Mrs. Erlinda Cadapan shouted as she faced retired Gen. Jovito Palparan Jr. and other military officers at the end of yesterday’s hearing on the case of Sherlyn Cadapan and Karen Empeño.

After hearing once again the testimony of eyewitness Raymond Manalo that her daughter Sherlyn was raped, the mother could not contain her rage. Although Mrs. Concepcion Empeño, mother of Karen, did not utter a word, she held a placard that read: “Palparan, guilty!”

The two mothers have been searching for their daughters, both students of University of the Philippines (UP), for more than five years. Karen and Sherlyn, along with farmer Manuel Merino, were abducted on June 26, 2006 in Hagonoy, Bulacan by state agents.

In May, following a Supreme Court decision that pointed to Palparan and other military officers as responsible for the abduction, the mothers filed a complaint before the Department of Justice (DOJ). A three-man panel of the DOJ led by Assistant State Prosecutor Juan Pedro Navera conducted a series of hearings for the preliminary investigation of the case. 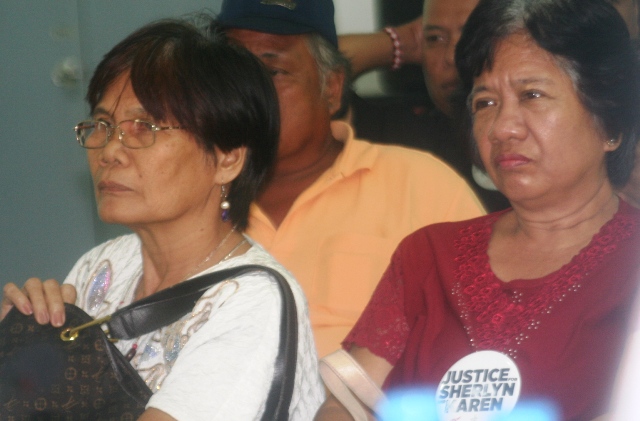 Mothers of the two missing University of the Philippines (UP) students listen intently to the statements of respondents.(Photo by Ronalyn V. Olea / bulatlat.com)

At the clarificatory hearing, Sept. 23, the prosecutors propounded questions both to witnesses and respondents.

Manalo, who, along with his brother Reynaldo, was held by the military from February 14, 2006 until their escape in August 2007, positively identified Palparan, former commanding general of the 7th Infantry Division, and other respondents M/Sgt. Rizal Hilario, Lt. Francis Mirabelle Samson and Lt. Col. Felipe Anotado as some of the soldiers whom he saw or talked to during the months he was held in captivity. Raymond was able to describe vividly the soldiers who he initially knew by their aliases.

On a whiteboard, Raymond wrote down the places where he was taken to during his 18 months of captivity. These included Fort Magsaysay in Nueva Ecija; a safehouse in Pinaud village, San Ildelfonso, Bulacan; village hall of Sapang, San Miguel, Bulacan; Camp Tecson ; Limay, Bataan; a safehouse in Iba, Zambales and a farm in Bolinao, Pangasinan.

Manalo met Karen and Sherlyn in Camp Tecson sometime in August 2006. From there, Manalo, the two UP students and Merino, was transferred from one camp or safehouse to another. It was in Limay, Bataan, at the camp of the 24th Infantry Battalion of the Philippine Army where Raymond last saw Karen and Sherlyn. He recounted how the students were raped by M/Sgt. Donald Caigas. Caigas, also a respondent to the case, is already dead.

Manalo also named Harry Baliaga, also implicated in the abduction of Jonas Burgos, as one of those who abducted him. Baliaga is yet to be named as respondent in this particular complainant. 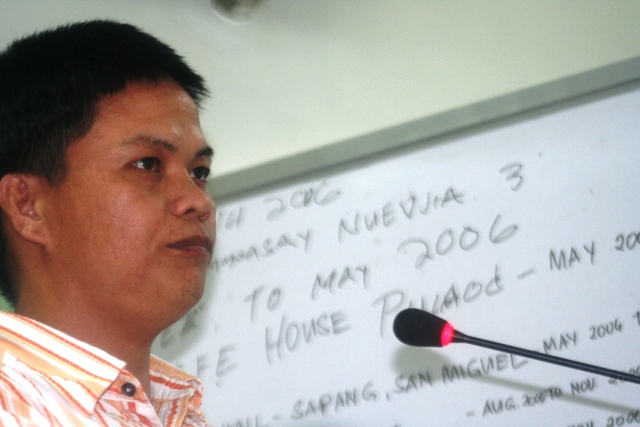 According to Manalo, Palparan talked to him twice in one night in May 2006 when he was at the village hall of Sapang, San Miguel, Bulacan.

“He told us he would spare our lives if we followed his orders. He said he would allow us to see our parents and we should tell our parents not to attend hearings and rallies and not to talk to Karapatan,” Manalo told the panel.

Another witness, Oscar Leuterio, who was held by the military for five months at Fort Magsaysay, also positively identified Palparan as the one who talked to him sometime in August 2006.

“He told me I would be released if I cooperate with them,” Leuterio told the panel, adding that soldiers call Palparan as “Lolo.”

Leuterio said the two students were taken to the same camp in Nueva Ecija on June 27 of the same year. The witness said he heard the soldiers refer to the two women as Ka Tanya and Ka Sierra.

Witness Wilfredo Ramos recounted how the abduction took place while Alberto Ramirez testified that Merino and 12 soldiers went to their house on July 25, 2006. One of the soldiers, known to Ramos as Arnel Enriquez, showed him a two-page document containing aliases of alleged New People’s Army (NPA) guerillas. Asked by Navera if remembered any of the names in the list, Ramirez said he saw the names Ka Tanya, Ka Sierra and several other “Ka.”

Edre Olalia, one of the lawyers of the complainants and secretary general of the National Union of Peoples’ Lawyers (NUPL), said the witnesses reinforced and validated their accounts. “They had a straightforward, candid, consistent and clear recollection of events.”

On the other hand, Olalia said of the statements of the respondents: “Connections had been established and there were many admissions.”

Asked by the panel, Palparan admitted he visited camps and that his men kept safehouses.

“It is an intelligence function to maintain safehouses,” Palparan said.

As then commanding general of the 7th ID, Palparan was in control of the 703rd brigade and two infantry battalions – the 24th IB and the 56th IB—and a composite team called Task Force Bulacan, also known as Task Force Malolos. 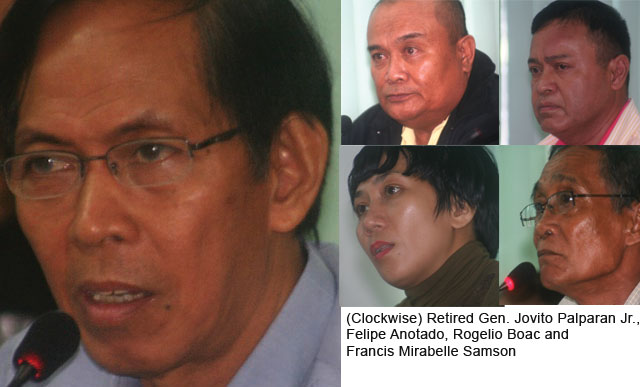 All the respondents who were asked by the panel confirmed that they were assigned to the military units being accused of carrying out of the abduction. But they denied they knew about the abduction and claimed that they just heard it from the media.

Samson confirmed she was commander of the Special Operations Training (SOT) Team 7 that operated in the villages of Hagonoy, Bulacan. Lt. Rogelio Boac, then commanding officer of the 56th IB said he was part of the Task Force Bulacan under the 703rd Brigade. When asked by the panel, Boac confirmed that he worked with Samson and that Samson reported directly to Boac.

Asked about the mission of the SOT, Boac said, “To neutralize the communist-terrorist intelligence network in the areas, to decrease their efforts in significant manner.”

The Task Force Bulacan, according to Boac, operated in the coastal villages of Hagonoy.
Anotado, then assigned to 24th IB operating in Bataan and Zambales, said he reported directly to the 703rd Brigade.

Asked if the 24th IB and the 56th IB conduct interoperable operations, Palparan said, “Yes, your honor. That’s possible but it had not happened. I cannot remember that there were interoperations.”

“The abduction could not be carried out without Palaparan’s knowledge,” Olalia told Bulatlat.com in an interview shortly after the hearing. “They [soldiers] were all under Task Force Malolos. It’s a conspiracy. His men would not act without his knowledge.”

Both parties were given 15 days to submit their memoranda before the DOJ issues its resolution.