The recorded profit of the top 1,000 corporations in the Philippines ballooned more than five times (552-percent) in a decade, but the average wages and salaries increased only 31-percent over the same period.

MANILA – Citing papal writings and research findings on economic, historical and comparative aspects of continuously denying the Filipino workers a substantial wage hike, a legislators’ forum organized by the House of Representatives labor committee upon the request of Anakpawis Partylist Rafael Mariano last Monday succeeded in gathering additional authorship and support for wage hike bills in Congress. Rep. Mariano is the author of House Bills 375 and 3746, which seek to enact a significant increase in the minimum wages of workers in the private and public sectors.

“A democratic state can do no less than side with their workers and their wages over capitalists and their profits,” said Sonny Africa, head of research of non-government economic think-tank Ibon Philippines. Africa showed the gathered legislators and unionists the huge disparity between the Filipino workers’ wages, which had barely increased in the last decade, and the capitalist profits which had ballooned nearly six times over the same period. Africa also showed how wage rates have continuously lagged behind and farther even from the government’s estimated family living wages. 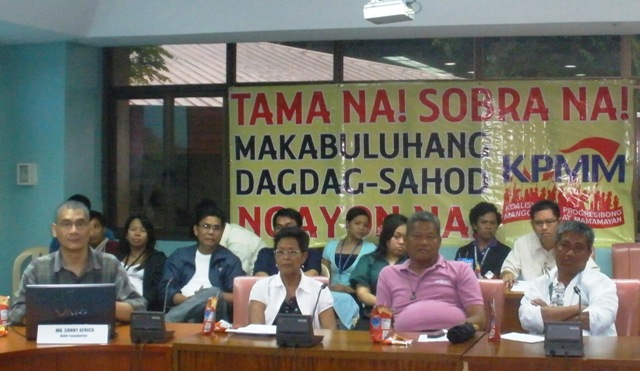 Sonny Africa of Ibon and other labor leaders told legislators that a substantial wage hike is good for the economy.(Photo by Marya Salamat / bulatlat.com)

Under President Benigno “Noynoy” Aquino III’s more than a year-old administration, Filipinos’ wages have also not yet significantly increased despite his promises of change and fulfilling the Filipinos’ dreams during his campaign. The P22 ($0.50) additional cost-of-living-allowance it granted last May has barely brought the minimum wages closer to the needed family living wage.

In the National Capital Region, Ibon computed the family living wage at P999 ($22.82) as of Aug this year, but the minimum wage is pegged in the National Capital Region (NCR), where it is highest, at P426 ($9.73). The gap between minimum wages and family living wage is wider outside of NCR. Africa clarified that they based the computations on the National Wages and Productivity Commission’s data, even as he noted that the NWPC’s webpage for such data has been “under construction” for quite a while now.

Ibon also told the legislators that a P125 ($2.86) across-the-board wage increase nationwide will only mean a 15-percent cut in profits of companies operating in the country. It will still not bring the minimum wages close to the needed living wages, which the Philippine constitution has explicitly guaranteed its citizens.

There is budget, but little priority is given to public sector workers’ wages

Taxes collected by the government in the last decade have more than doubled (from P600-billion [$13.71b] in 2001 to P1,250-billion [$28.6b] in 2010), Ferdinand Gaite, national president of the Confederation for Unity, Recognition and Advancement of Government Employees (Courage) told the legislators’ forum. But the wages of public sector workers in the same period, noted Mr Gaite, have increased by only less than half (49-percent), and a big part of it was accounted for by bigger leaps in salaries of executives in government agencies, rather than in salaries of sub-professional and professional levels. 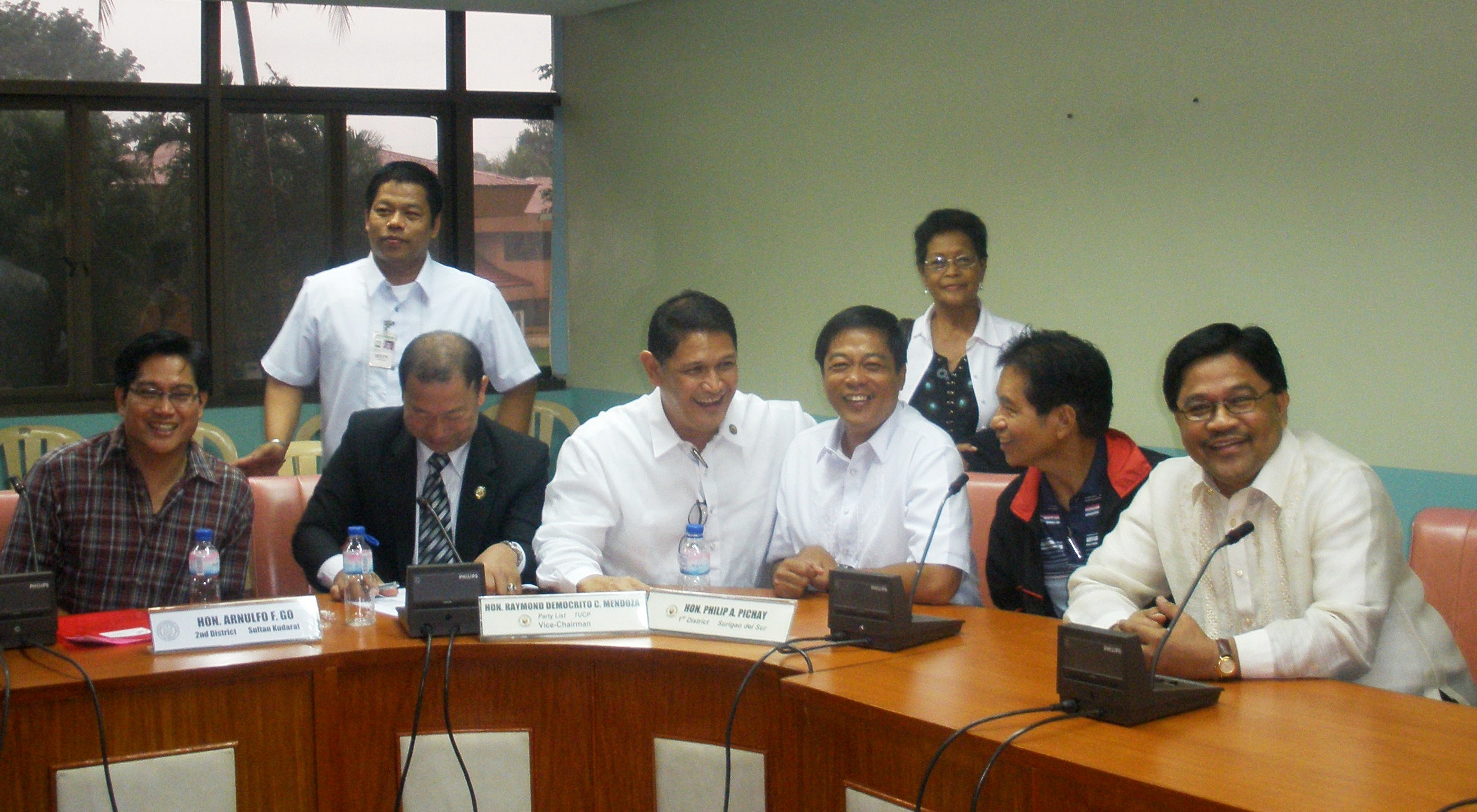 Leaders of KMU, Courage, TUCP, Anakpawis Partylist and other legislators shared a light moment after a forum in support of wage hike.(Photo by Marya Salamat / bulatlat.com)

“A just wage is a concrete measure – and in a sense a key one – of the justice of a system,” wrote Blessed John Paul II in Laborem Excersens twenty years ago. The Church People-Workers’ Solidarity (CWS), in a “covenant statement” approved in their national conference early this month, lamented that presently, “most Filipino workers get unjust wages.” The group cited as example the palm oil workers in Agusan del Sur who are only paid P90 ($2.06) for harvesting 30-kilos of palm fruits that sell for P7,200 ($164.48).

Such “death wages translate into dehumanizing poverty,” said the CWS. Gabriela Women’s Partylist Rep. Luzviminda Ilagan added that in some big Mindanao plantations, in fact, there are also groups of workers who go to work without clear pay. “They come to work in exchange only for a chance to be employed if a regular worker goes absent.”

Rep. Ilagan reiterated their support for enacting a nationwide substantial wage hike. “The women in this country know only too well how immensely difficult it is to budget a pitiful amount of take-home pay,” she said.

The group quoted Pope Benedict XVI who exhorted governments in 2009: “The primary capital to be safeguarded and valued is the human person… who is the source, the focus and the aim of all economic and social life.”