The environment is struggling for survival, and it cannot heal its wounds without our help.

This was the message delivered by various environmental activist groups as they held a series of activities to call attention to the worsening destruction of the environment brought about by the irresponsible corporate activities of local and global businesses.

Last September 24, Advocates of Science and Technology for the People (AGHAM), the Junior Agham chapter in the Polytechnic University of the Philippines, and the Kalikasan People’s Network for the Environment led a tree-planting activity they called “Tree Planting for Watershed Restoration, Agroforestry and Upland Sustainable Agriculture” in Sitio Panusugin, San Joseph, Antipolo City. They were joined by members of the Kalingap Marikina Watershed, the San Joseph Chapel Grower’s Association and Philippine Climate Watch Alliance.

September 24, 2011 marked the global climate actions to put an end to the climate crisis that brought large-scale destruction and disorder to many communities all over the world. Environment groups from the United States, South Africa, Colombia, Indonesia, Kazakhstan, Uruguay, Vietnam, Australia, Nigeria, Brazil, India, Turkey, Ghana held various activities to commemorate the event. Green activists biked, skated and marched all in the name of saving the environment.

According to Agham spokesperson Feny Cosico, the activity mobilized more than 200 volunteers who planted 200 seedlings of bamboo for the prevention of erosion in certain parts of the Marikina forest and rivers. She said the activity was also part of continuing efforts for the reforestation of Marikina watershed; last year, the same organizations planted hardwood and fruit-bearing trees in same area. 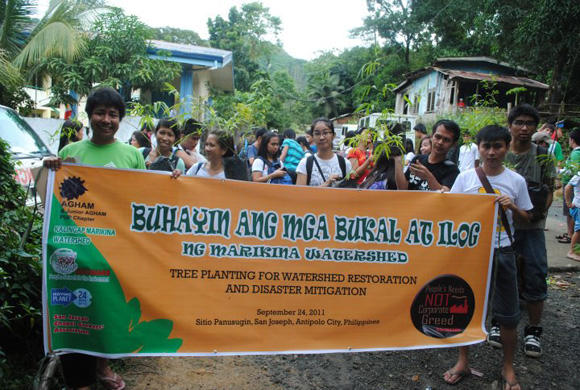 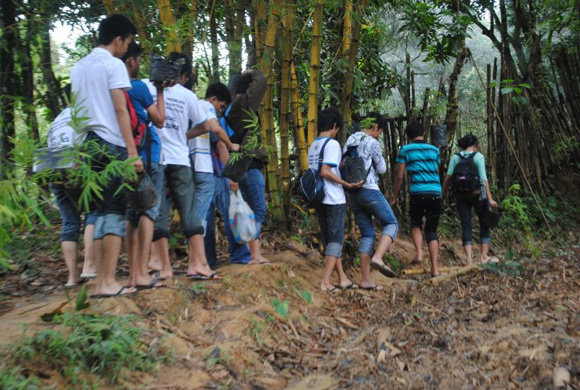 Advocates of Science and Technology for the People leads volunteers in planting 200 seedlings of bamboo for the prevention of erosion in certain parts of the Marikina forest and rivers. The activity was also part of continuing efforts for the reforestation of the Marikina watershed. Last year, the group also held a similar activity and planted hardwood and fruit-bearing trees in the same area. (Photos from Agham Nasyunal by Lito Ocampo and Jed dela Cruz / bulatlat.com)

“Marikina watershed sustains life not only for the immediate communities of Antipolo but also the bigger part of Metro Manila. It is the source of potable water and other household water requirements of the metropolis, hence, the need to preserve and conserve the watershed ecosystem that provides clean water and resources to the people,” Cosico explained.

The environmental activist said tree planting is more than just reducing the carbon footprint of individuals.

“It’s engaging the people to make concrete and progressive steps to address the intensifying impacts of climate change. By way of educating the people on the realities and tragedies of climate crisis and to convince them that there is no greater way to win the war of climate crisis but to unite ourselves to challenge big nations and corporations that are the primary polluters of the environment,” she said.

Cosico asserted that it is the irresponsible use of fossil fuels that cause a significant emission of carbon dioxide to the environment, which has to be addressed through the concerted efforts of peoples regardless of country, race or religion. She said the over-all goal of this worldwide initiative is to bring into the streets many people to show strength in demanding for the reduction of the emission of carbon dioxide.

According to Cosico, the tree-planting and other activities, which are aimed at highlighting the need to protect the environment, has a deeper meaning when seen in the context of the devastation the Philippines suffered in the last three years.

“Many Filipinos who are still hunted by the catastrophic typhoon Ondoy. This tree planting is a tribute to those who perished from the ravages of typhoon Ondoy and also a wake up call to our government and to the people to make them realize that the environment we live in is our legacy for the next generation,” she said. “There is no better time than today to nurture and protect our environment for it is basis of our life, of our whole being.”

The week previous to the tree-planting activity, more than 1,000 volunteers from Kalikasan PNE, Agham Youth UP Diliman, UP Explore and the Universidad de Manila Social Action and Voice for the Environment (UdM SAVE) joined the International Coastal Cleanup activity in Manila Bay.

Manila bay is a semi-closed bay system abundant in marine resources such as fish and mollusks that have been the primary source of food and livelihood for people in coastal communities. The bay has suffered from serious water quality deterioration due to the dumping of sewage, garbage, industrial pollutants and land reclamation.

“Youth action is integral to the protection of our ecosystems. Our participation in the protection of Manila Bay is vital, as it is the most important ecosystem in Metro Manila yet the most polluted and degraded in the country,” UP Explore said in a statement.

“Aside from severe pollution, government and private corporation projects have destroyed the shoreline of Manila Bay. Land reclamation for commercial and industrial purposes has resulted in the destruction of mangrove areas in the bay and the displacement of coastal communities,” said Leon Dulce, Kalikasan PNE spokesman.

According to government data, around 30 percent of the country’s population live around the Manila Bay area. As of May 2000 there are 23,045,442 persons living in Manila Bay environs. In the meantime, some 42.6 percent of this population segment or 9,826,622 people live in the coastal areas, which include Manila, Las Piñas City, Parañaque City, Pasay City, Navotas, and nearby provinces.
“If the government wants to protect Manila Bay, it should stop its reclamation and conversion projects.These projects threaten to destroy the remaining mangrove ecosystem and displace thousands of fisherfolk living in Las Pinas City, Paranaque City and Cavite province,” Dulce said.

At the turn of the 20th century, there were about 54,000 hectares of mangrove around the bay. By 1995, only about 794 hectares remained. The 175-hectare Las Piñas-Parañaque Coastal Lagoon, among the last remaining mangrove areas in Metro Manila that serve as a bird sanctuary and source of livelihood for fisherfolk , is under threat from a government-backed reclamation project by Cyberbay Corp.

Jhon Lor Bae, chairperson of UdM SAVE said they want to help in efforts to save Manila Bay not only because it is a critical ecosystem but also because it is part of the Filipino people’s heritage. He said youth environmental groups will continue their rehabilitation efforts.

“There’s a need to put pressure on the Aquino government to abandon it’s reclamation and coastal conversion projects,” he said.