MANILA — “We are overworked but underpaid, but even so, I never think of quitting my job,” said Michelle Silva, a teacher of five years at the Demetrio Tuazon Elementary School.

On this year’s World Teachers Day, Silva, like other hundreds of teachers from across the country, joined the nationally-coordinated mobilization to push for a ten-point demand, including an increase in their salary.

“The president remains apathetic our demands,” Benjie Valbuena, Alliance of Concerned Teachers (ACT) vice chairman said. Valbuena added that even as the 2012 budget on education increased by P31 billion ($738 million) compared to the 2011 education budget, the allocation is still not enough to cover the shortages in teachers, classrooms, chairs, among others.

According to ACT, at least 104,000 new teachers are needed to address the shortage.

The teachers were supposed to meet with Aquino but, Valbuena said, they were told that their request letter did not reach the president and thus, no one in the Malacañang was ready to meet them.

Joy Martinez, a teacher at the Imelda Elementary School in Malabon said the government missed the essence of commemorating Teachers Day. “Teachers day is commemorated because it was during this day that the International Labor Organization (ILO) and United Nations Educational Scientific and Cultural Organization (Unesco) signed the Recommendation concerning the Status of teachers, a consensus on the status, salaries, and protection of teachers around the world.” 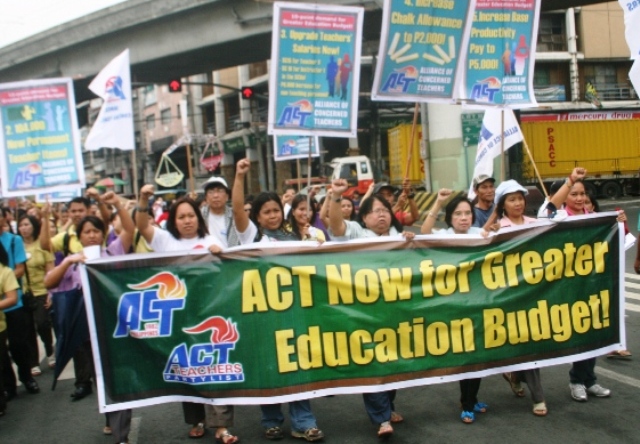 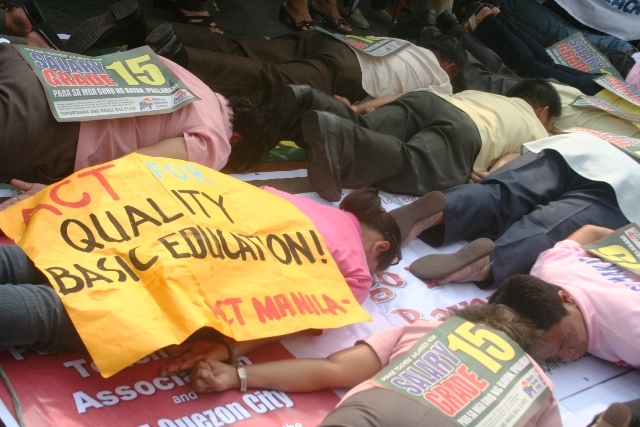 Teachers plank at the Chino Roces bridge to press for their ten-point demand.(Photo by Anne Marxze D. Umil / bulatlat.com)

The Department of Education (DepEd) held their celebration at the Philippine Sports Arena where celebrities serenaded the teachers.

Martinez said it is about time that the government should give priority to the demand of teachers. With a measly P3,000 to P4,000 average take home pay ($71 to $95), Martinez said, teachers are forced to pawn their ATM to loan sharks.

Teachers also demand for bigger subsidy for the Philippine Normal University (PNU), the national center for teacher education, as well as other state universities and colleges (SUCs). According to ACT, PNU’s budget proposal for the year 2012 is P754.9 million ($17 million) but only P284.9 million ($6.78 million) was approved.

“There is a need to increase the budget of SUCs because it is where teachers come from. Without quality education, there can be no good teachers. What do we expect from our teachers if the budget for our SUCs continues to be slashed?” Ramon Guillermo, president of All UP Academic Employees Union, said in a program held outside the Malacañang Palace on Wednesday.

“Chalk is a very basic need of a teacher. Why do we need to ask for it?” said Cristina Manalo, a teacher from E. Rodriguez High school and president of Philippine Public School Teachers Association (PPSTA).

To save chalk, Silva said, they write lessons on a manila paper but they also buy the cheapest refillable markers. Silva said a quality marker may cost almost a hundred pesos (more than $2), but because they have limited budget they only buy markers that costs P30 ($0.71).

Aside from the lack of budget for teaching needs, teachers are also facing issues like corporal punishment.

“Do our legislators know that corporal punishment may take different forms and teachers also suffer from it? Our class size is more than twice even trice larger than the standard class size of 25. We work overtime and our salaries are not even increased. Isn’t that exploitation?” Manalo said.

“We teachers are short fused. We are forced to pawn our ATM; we think about where to get our transportation for the next day. And yet, teachers are still to blame,” Manalo said.

1) Regularization of all volunteer/contractual teachers. According to DepEd, there are 49,530 locally funded teachers and 19,063 volunteer kindergarten teachers now working in public schools. ACT said DepEd should prioritize the regularization of the employment status of these teachers so that they too will receive the proper compensation and benefits.

5) Allotment of P91.5 billion ($2.17 billion) to address shortages in classrooms and other school facilities.

7) 100 percent increase in maintenance and other operations expenses (MOOE) in basic and tertiary education.