“There is a real danger that a single family in Casiguran, Aurora will reap the majority of the benefits of the influx of money from the foreign investments into the special economic zone (SEZ) owing to the way the composition of the Board of Directors of APECO is crafted under RA 10083.”

MANILA – Residents of Aurora and their supporters filed a petition before the Supreme Court, Oct. 12, seeking to stop the Aurora Pacific Ecozone and Free Port (Apeco)

The petitioners, composed of farmers, fishermen, indigenous peoples from Casiguran, Aurora and organizations such as the Alyansa ng Magbubukid sa Gitnang Luzon (AMGL), Panlalawigang Alyansang ng Magbubukid ng Aurora (Pamana) and Justice and Peace Action Group of Aurora (JPAG), Kilusang Magbubukid ng Pilipinas and Pambansang Lakas ng Mamamalakaya (Pamalakaya), among others, are asking the Supreme Court to strike down and declare as unconstitutional the two laws. They are all part of the Resist Apeco! Defend Aurora Movement.

“The petitioners who belong to the poor and oppressed sectors of the society – the farmers, fisherfolks and indigenous peoples, are presently in great danger of losing their properties, their livelihood and what little they still have to be able to exist and survive, in clear violation of the rights and protection mandated to them by the Constitution,” the petition read, a copy of which was sent to Bulatlat.com by the Public Interest Law Center (PILC), counsel for the petitioners. 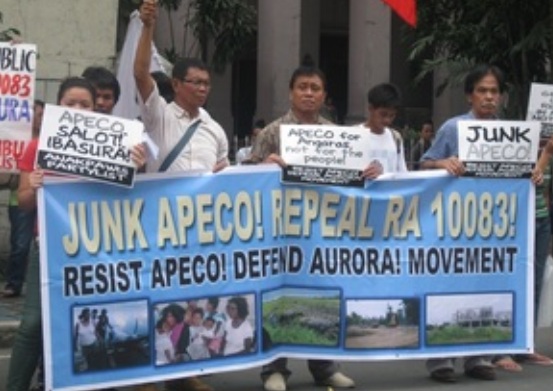 The petitioners asked the court to issue a temporary restraining order and/or writ of preliminary injunction ordering the respondents to cease and desist from proceeding with the implementation of the Apeco.

The groups said that in implementing the Aseza-Apeco laws, the respondents are depriving the residents of Casiguran, Aurora of their homes, ancestral domain, land and livelihood.

The petitioners asserted that both laws violate the social justice provision on agrarian reform stated in the 1987 Philippine Constitution.

In one of the hearings at the House of Representatives, Undersecretary Gerundio G. Madueño of the Department of Agrarian Reform (DAR) said 525 hectares of land have been distributed to about 425 agrarian reform beneficiaries in the areas covered by the Apeco.

The groups argued that the Apeco’s compulsory coverage of agricultural land amounts to illegal land use conversion. They pointed out that the local government has not reclassified the lands affected by Apeco prior to the enactment of the laws.

In the same vein, the laws, according to the group, violate fishermen’s rights enshrined in the Philippine Constitution and relevant laws. “Republic Acts 9490 and 10083 establishing the ASEZA/APECO and converting lands for use as a Special Economic Zone (SEZ) are blatantly unconstitutional due to the extreme prejudice that these will cause to the subsistence fishermen in the affected communities,” the groups said in the petition.

While provisions of the laws make no explicit mention of fishermen, the areas stated in both laws cover the residences of subsistence fishermen and their fishing grounds, such as shorelines, bays and inland rivers in villages Esteves, San Ildefonso, Cozo and Dibet, all in Casiguran.

“The Aseza simply took from the affected fisherfolk their fishing grounds and livelihood through the operation of the law without providing any just compensation, viable alternatives or the workable transfer to a location that hold equal opportunities for them to make use of their skills as fishermen in order to eke out a living,” the groups said.

The Apeco project also covers 11,900 hectares of land being claimed by the Agtas and Dumagats in San Ildefonso, Culat and Cozo villages as part of their ancestral domain.

The groups said the implementation of the project “would necessarily result in the eviction of indigenous peoples occupying portions of the area covered by said law and could result to the displacement of a great number of indigenous peoples from their total environment, the discontinuance of their cultures and traditions, and the possible extinction of their cultural identities.”

“It is easily visible … that the establishment of the Apeco is for the advancement of vested interests and not for the real development of the concerned and affected peoples,” the groups said.

The RA 10083, according to the petitioners, violates Section 11, Article XII of the 1987 Constitution, that protects the national economy and patrimony. 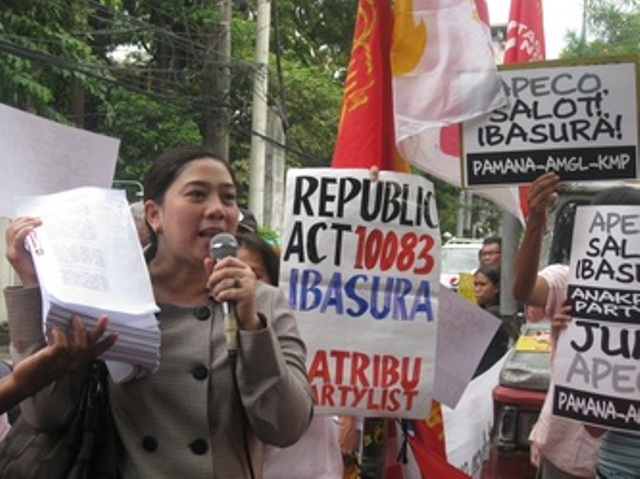 “Only Filipino citizens are qualified to operate public utilities under the Constitution yet RA 10083 would allow foreign investors under the guise of private enterprises to perform this function,” the petitioners said.

Citing provisions of the RA 10083, the groups said it is highly possible that only one politically powerful family, as shown in the case of Aurora, may fill all the key positions of the Apeco’s Board of Directors .

“There is a real danger that a single family in Casiguran, Aurora will reap the majority of the benefits of the influx of money from the foreign investments into the special economic zone (SEZ) owing to the way the composition of the Board of Directors of APECO is crafted under RA 10083,” the groups said.

On the other hand, the groups said it is the taxpayers’s money that is being spent on a project without a clear public purpose.

Section 12-A of RA 10083 declares Apeco as a non-profit entity. “The question arises as to why the government will spend P 6 billion ( $139.5 million) from the General Appropriations from the public coffers for an entity that is not profitable. If the Apeco has a non-profit character, then the Philippines has spent taxpayers’ money to create the infrastructure for the SEZ, destroyed the livelihood of farmers and fisherfolk, ruined the environment and natural resources and given attractive incentives for foreign investors for no public good whatsoever,” the groups said.

The groups also criticized Apeco’s powers, including taking up land and expanding itself without further legislative action, borrowing funds from foreign sources and incur indebtedness without the need of the concurrence of the Bangko Sentral ng Pilipinas and decentralization of powers of government.

“The railroading of the laws creating Aseza and Apeco at the House of Representatives and the Senate therefore is another violation of their right to due process,” the petitioners maintained.

In their petition, the people of Casiguran who are directly and unduly affected by the creation of Aseza and Apeco said they were not consulted or heard before these laws were passed by Congress.

They said no public hearing at the House of Representatives was conducted on the creation of economic zone. They said there was no forum for the affected sectors to thresh out and address the possible problems and issues involving the creation of Aseza/Apeco. They also noted that not even the municipality of Casiguran was consulted.