‘Righteous path not about scrimping on health care and workers’

The House of Representatives approved on its final reading (last Oct 11) a P200m ($4.6m) addition to the DOH budget and P400m ($9.2m) for government-owned and controlled corporation hospitals, as a result of the intense campaign of progressive health groups for a higher health budget.

MANILA – If the youth and students have planking as a new mode of protest, the health workers have “owling.”

“This is pop culture made progressive by health workers here,” said Sean Vilchez, deputy secretary-general of Health Alliance for Democracy (HEAD). Indeed, in the program his group and other members of the Coalition of Health Budget Increase held in front of the University of Sto. Tomas, and on the march toward Chino Roces Ave. (formerly Mendiola Bridge) this Thursday, some participants “owled” to hoots of delight from their fellow health workers and passersby.

The national budget is still being deliberated in Congress. Last Tuesday, its 2012 General Appropriations Act, amounting to P1.816T ($41.7b), was approved after final reading at the House of Representatives. The deliberations are now focused at the Senate. 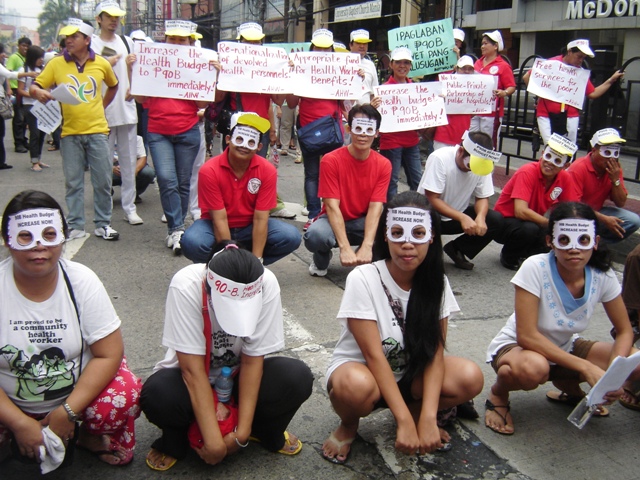 The health workers’ groups brought their protests to Malacañang because, according to Jossel Ebesate, national president of the Alliance of Health Workers (AHW), “the real forces behind the ongoing deliberation of the national budget are President Benigno Simeon Aquino III and the Department of Budget and Management.”

The health coalition composed of health practitioners from public hospitals, students of health courses and community health workers, are urging President Aquino to act on what they describe as “permanent disaster” happening in the country – the government’s neglect of health.

“The Department of Health has often been reduced to shame by just being in a position to report the rising number of victims of dengue, leptospirosis, tuberculosis and other illnesses,” said Ebesate, adding that, on the ground, or in public hospitals and health centers, the health department has been proven again and again as “inutile” at providing much needed health services.

The progressive health group’s early efforts at calling for a higher ‘just for starters’ health budget— higher than even the amount proposed by the health department— have garnered “an initial victory.” The House of Representatives approved on its final reading last Tuesday (Oct 11) a P200-million ($4.6m) addition to the DOH budget and P400-million ($9.2m) for government-owned and controlled corporation (GOCC) hospitals. 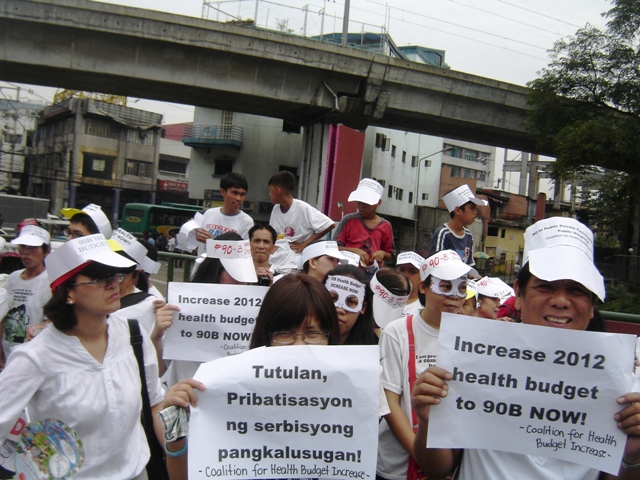 “Our efforts to expose the ill effects of low health budget paid off. But while we recognize this initial victory as a result of the people’s efforts through the support of pro-health lawmakers, we see that we need to exert more efforts to effect a more substantial increase,” said Ebesate in a statement.

At the Dr. Jose Fabella Memorial Hospital in Manila, members of Gabriela-National Capital Region urged senators “to realign the approved budget of the Lower House and give priority to the basic services that poor Filipinos need.” Gabriela-NCR stressed that senators must scrutinize Aquino’s proposed budget well and allocate bigger subsidy to health services and education, as the battleground on the issue of budget cuts shifts from Congress to Senate.

Though the women’s group did not “owl” their protest, they did something unique, too, in staging their rally at the Fabella Hospital Thursday. To symbolize “the inaction and negligence of the Aquino administration over the welfare of women and children,” in a place known to be the only public lying-in hospital in the country, pregnant moms bared their bellies with written slogans, ‘No to budget cut on health services!’

Another P100-million ($2.3m) is reportedly added to the budget of the UP-PGH, plus another P60-million ($1.4m) for CT scan and other services. The supposed “hospital of last resort” has also clinched what they call as “initial victory” when they succeeded a month ago to “suspend indefinitely” the new order of its director to start billing indigent patients.

The GOCC hospitals including Philippine Heart Center, Lung Center of the Philippines, National Kidney and Transplant Institute and Philippine Children’s Medical Center, will get additional P100-million ($2.3m) each.

For the Coalition for Health Budget Increase, the initial increases “proved once again that organized action is necessary to push for our rights,” as Ebesate said during their rally at the Mendiola Bridge. The group also repeatedly thanked the support of lawmakers such as Bayan Muna Rep. Teddy Casiño, Gabriela Women’s Partylist Reps Emmi de Jesus, ACT Partylist Rep Antonio Tinio, Anakpawis Partylist Rep. Rafael Mariano and other pro-health legislators.

The group also chided Health Sec. Enrique Ona who they say had vehemently defended the department’s low asking budget during the hearing last September in Congress. At the hearing, the DOH officials’ position had been to make do with limited budget and to promote instead public-private partnerships and Philhealth as sources of funds for health services. This DOH stand, said Ebesate, was clearly enunciated in its proposal and defence of it during the budget hearings.

Yet, when news came out that the lower chamber of Congress approved a total of P0.6-billion ($13.8m) additional health budget, the health department crowed like it had angled for it all along, said some dismayed health workers during their rally.

They now challenge the health department and President Aquino himself to go beyond this initial increase to have something truly worthy of crowing about, for a start. They pressed Aquino to push for a P90-billion ($2.1b) health budget.