MANILA — Filipino activists said on Monday that more protest actions should be expected after the successful global protests against corporate greed and in support of the Occupy Wall Street” movement in New York.

“The global reality we are facing is that of the growing demand for a new system that puts people ahead of private profits. The system of monopoly capital and finance oligarchy is totally bankrupt and has impoverished hundreds of millions worldwide,” Bayan secretary general Renato Reyes, Jr., said, “It has plunged developed countries into debt and unemployment and has kept oppressed countries like the Philippines underdeveloped.”

“Whether you’re in New York, London or Tondo, Manila, we face a common problem in the domination of the big banks, big corporations and multilateral financial institutions. These are the entities that impose on the global economy,” Reyes added.

On October 14 and 15, activists, spearheaded by Bayan and the International League of the Peoples’ Struggle held solidarity protest actions in Ayala, Makati, the Philippines’ financial district, and in front of the United States Embassy along Roxas Boulevard. Reyes said they are supporting the call against the “economic system that benefits and protects the one percent of the population who are exploiting the majority while disregarding the 99 percent.” 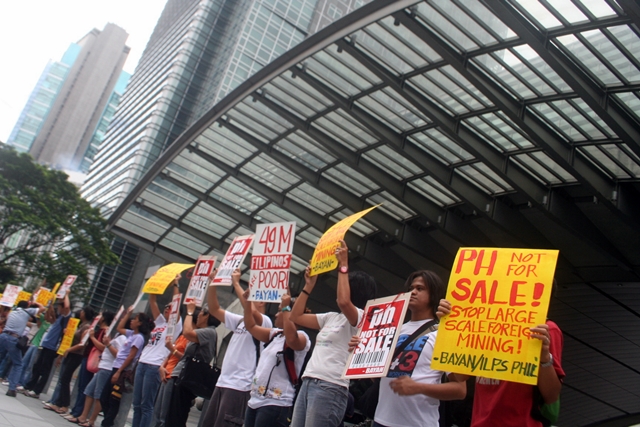 Protesters walk in single file as they “occupy” the streets of Ayala, the country’s financial district(Photo by Janess Ann J. Ellao / bulatlat.com)

The one percent, according to Occupy Wall Street, are the “richest people who are writing the rules of the global economy, are imposing an agenda of neoliberalism and economic inequality that is foreclosing our future.” The movement, which began on September 17 in Liberty Square in Manhattan’s Financial District, was inspired by the uprisings in Egypt, Tunisia, among others, as they struggle against the “corrosive power” of major banks and multinational corporations and the role of Wall Street in “creating an economic collapse that has caused the greatest recession in generations.”

A month since the Occupy Wall Street has started, their calls against job insecurity, wage depression, among other issues has inspired local versions of “Occupy” protests in 100 cities in the United States and in other countries.

“Because of the crisis, the conditions of the workers and peoples of developing countries are increasingly being experienced by the workers and peoples of advanced capitalist countries: the pressing down of wages, cutbacks in indirect wages in the form of social services, soaring prices and widespread unemployment,” Kilusang Mayo Uno, a progressive labor center, said.

Gabriela, the largest women group in the Philippines, who joined the rally both in October 14 and 15 in Ayala, Makati and in front of the United States Embassy said they are supporting the calls of the US working class who have been allowed to go through such economic hardships, and “people in neo-colonies like the Philippines who should be more vigilant against further US terrorism, economic and political, as it tries to recover by further exploiting so-called emerging markets.”

Reyes expressed his concerns about the moves to lift restrictions on foreign ownership of land, utilities, media and tertiary educational institutions through the proposed charter change.

“The move to change the charter is a step toward the bargain sale of Philippine patrimony and total surrender of economic sovereignty,” Reyes said, “The move favors the big banks and transnational corporations and puts Filipinos at a gross disadvantage.”

Gabriela secretary general Lana Linaban said with the United States and other imperialist countries in dire need to recover from the crisis, the move to open up the economy to 100 percent foreign ownership of the land and industries will help foreign businesses at the expense of pushing Filipino families to “chronic poverty.” 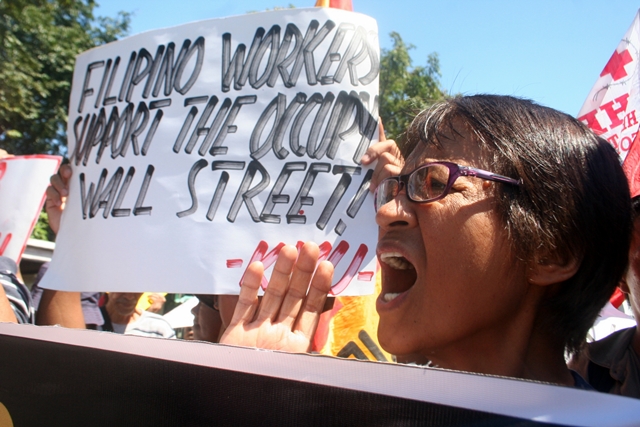 Under the present 1987 constitution, foreign enterprises are only allowed 40 percent of ownership of land or industries . Yet, even without charter change, Linaban said, many Filipinos are subjected to poverty and displacement because of the widespread land grabbing and plundering of natural resources. “What else would be left to Filipinos if foreign enterprises could now own 100 percent of land and industries in the country?”

For one, she cited the support of President Benigno S. Aquino III’s administration on the mining activities in Surigao del Norte, which was recently attacked by the New People’s Army, the armed wing of the Communist Party of the Philippines, for violating environmental laws and affecting the livelihood of the locals living nearby.

Linaban said these corporations are given a free hand in controlling the mining areas by hiring private armies and militias and government troops. As a result, she added, locals complain of human rights violations including rampant sexual abuses by soldiers and para-military.

“President Aquino ignored the fact that the lives of the residents in mining areas were ruined by foreign exploiters. The Filipino people’s anti-mining sentiment is growing, evident in a recent survey commissioned by the mining industry, but Aquino chose to ignore this,” Linaban said.

This week, farmers struggling for a genuine land reform are also expected to arrive in Manila. Issues that they will raise include the proposed 100 percent foreign ownership of land.

Bayan said that with the US crisis at hand, the Aquino government should rethink and reverse Philippine economic policies, which, according to the group, is dependent on foreign investments, foreign loans and OFW remittances.

So far, Aquino’s key economic program – the Conditional Cash Transfer – which Reyes said is “dole-out economics” would not be able to stop the worsening crisis in the country.

Bayan added that oil companies, which has been a target of protests because of its “unbridled profiteering” are no different from the giant financial institutions that the Occupy Wall Street movement are fighting.

“They bleed the people dry,” Reyes said, adding that the next round of price increases will be met with protests.

The International League of the Peoples’ Struggle called on its allies to arouse, organize and mobilize the broad masses of the people for street marches, “to protest and resist imperialist plunder, state repression and wars of aggression and demand the immediate end of these in order to bring about a better life for the people.”

“Spearheaded by the financial oligarchy, the monopoly bourgeoisie has ruined the lives of the working people and even the middle class in both developed and underdeveloped countries,” the ILPS added in its statement.

KMU, for its part, urged the Occupy Wall Street protests to take a closer look on the roots of the current crisis. “We call on the workers and people of the US and the world to seize opportunities being presented by the crisis and aggressively expand and consolidate our ranks as we struggle for the world beyond imperialism and its attendant exploitation and plunder, repression and wars of aggression.”