“The growing number of undocumented OFWs worldwide is indicative of the ongoing crisis of forced migration and systemic economic crisis in the country.” – Garry Martinez, Migrante International

MANILA — In solidarity with other migrant organizations and labor advocacy groups, the Katipunan ng mga Samahang Migranteng Manggagawa sa Korea (Kasamma-Ko) expressed outrage over what it said was the Korean government’s intensifying crackdown against migrant workers.

According to reports from PressTV, South Korean migrants led by trade unions and migrant groups have been holding daily rallies and other forms of protests against the Seoul government’s month-long crackdown against undocumented migrants. Migrant groups and allied organizations charged the Korean government of “hunting workers down like criminals.”

As per 2009 migrant labor statistics, there are roughly 680,000 migrant workers living in South Korea who work in a number of industries, in particular, manufacturing, construction, and in services such as restaurants and entertainment.

A lawyer with the Korean Public Interest Lawyers’ Group YunJi-Young said that despite the South Korean government’s declaration that it was only doing research into the working conditions of migrant workers, the actual procedures it was implementing constituted a crackdown against illegal migrants. Ji-Young said it was likely that the crackdowns will result to various violations against individual and human rights, among them violations against personal liberty.

According to reports, many migrant workers in South Korea originally come from South or South East Asia. They are usually employed in factories, shoring up the country’s manufacturing industry. In the meantime, labor right advocates said the inhumane working conditions in many factories force migrant workers to run away and in the process end up become illegal migrants. Many of them arrived in Korea using tourist visas but were promised good paying jobs, but, in the end, they faced exploitative labor conditions and given no legal recognition as legitimate migrant workers.

This is not the first time that the Seoul government launched attacks against migrant workers. For the past decade, the government has been pushing for increasingly more stringent measures against migrant labor. In May 2010, 32 OFWs were nabbed by the Immigration police a few days after the Ministry of Justice announced the conduct of an intensified crackdown.

“We have very legitimate reasons to oppose the crackdown by the government of President Lee Myung-Bak. He should not let his unpopularity worsen with this obsolete strategy of labor outsourcing,” Pol Par said. 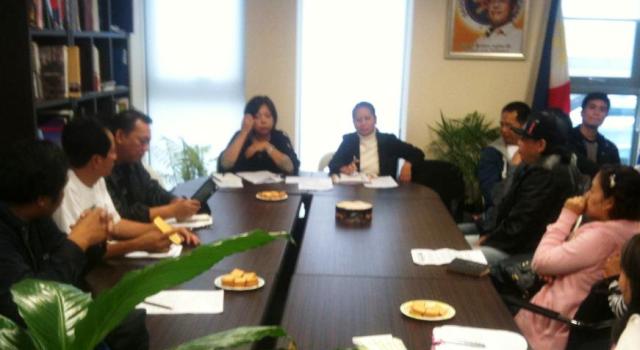 Par explained that the Lee Myung-Bak government’s Employment Permit System (EPS) has already been exposed as a ”defective labor arrangement.”

“It should be scrapped. All employed migrant workers should be processed for legalization. The employment of migrant workers in dirty, difficult and dangerous jobs in the Korean small and medium scale factories made significant contributions to the growth of the South Korean economy. They have the right for unhampered employment in the country. Local residents won’t even consider applying for these same exploitative jobs,” he said.

One of the objectives of the EPS was supposedly to increase transparency of sending and receiving workers, and consequently protect migrant workers’ rights and prevent discrimination.

The labor leader said attacking migrant workers on the basis of their visa status is a violation of the International Convention on the Protection of the Rights of All Migrant Workers and Members of Their Families which became in force in July 2003.
“The Convention’s primary objective is to protect migrant workers and their families, a particularly vulnerable population, from exploitation and the violation of their human rights,” Par said.

According to reports from various migrant labor advocacy groups, the EPS is the main system governing migrant labor in South Korea. It differs from the Trainee System because it does give legal acknowledgement to migrant workers as “workers.”Groups said the EPS was actually designed to ensure the preservation of profits and protect the interest of business owners.

The EPS was introduced in 2004. Under it, small and medium enterprises (SMEs) that employ less than 300 workers can hire migrants from 15 approved countries, mainly from China (especially Korean-Chinese), Vietnam, Philippines and Thailand.

Under the EPS, migrant workers are not allowed to change employment or move workplaces when they need or want to. A migrant worker who wants to find other work should first gain consent from his employer and file an application with the Ministry of Labor. The labor rights groups point out that the process is very difficult for many workers, particularly when employers will not release their employees.

According to a 2008 survey cited by Amnesty International, more than 50 percent of migrant workers indicated that their wages, working hours, provision of food and accommodation, and breaks and rest days were different from what their employer had originally promised. Wages were often withheld from migrant workers, especially in the months leading to the conclusion of a contract, because employers knew that workers would not have the time or ability to file a complaint and stay in South Korea long enough to recover lost wages.

Majority of the foreign population in Seoul’s metropolitan area are Chinese and, according to news reports, these Chinese migrants are among the biggest targets for arrest and deportation. Areas specific to one nationality or ethnic group are also targeted, such as those who originally hail from the Yeoungdungpo, Guro and Guemcheon areas. Mongolians from JungguÂ, the Mongolian town in Gwanghuidong; the Vietnamese in Seongdonggu, Geumcheongu and Seongbukgu; Russians and Uzbeks in Junggu, are also under attack.

The EPS system has been condemned by the international labor rights community and the United Nations Special Rapporteur on the Human Rights of Migrants has called the attention of the South Korean government regarding this.

For their part, the global alliance of OFWs and families Migrante International threw its support to the Filipino community and migrant communities of other nationalities in South Korea in their fight against the intensified crackdowns.

“The Philippine and Korean governments signed an agreement on the EPS in 2006. Since then, some 500,000 workers from the Philippines, Vietnam, Thailand, Mongolia and Indonesia have been brought to South Korea under its mandate. The EPS basically allows Korean employers who have failed to hire local workers to legally employ migrant workers,” he said.

Martinez said the EPS has failed to ensure benefits and protect the rights of migrant workers. “Instead, since its implementation seven years ago, cases of labor and human rights violations against OFWs and other migrant workers continue to run rampant,” he said.

“In the EPS there’s no monitoring system. Companies and employers violate migrant workers’ rights without being held accountable. More Korean employers have been hiring undocumented migrants to be able to evade compliance on minimum wages, benefits and leaves. As a result, undocumented workers are being targeted by the Korean government’s violent and intensified crackdowns,” he said.

Martinez himself was an undocumented OFW in South Korea for 12 years before he was deported to the Philippines. He said the present global economic crisis has unleashed the so-called “protectionist measures’ characterized by crackdown operations and harsher immigration policies that bear down on irregular or undocumented workers, at the expense of their human rights.”

“Undocumented migrants, who inevitably provide the solution to labor shortages or the clamor for cheap labor in host countries, are marginalized and exploited. They are less able to assert their claims and are more vulnerable to abuses because of their ‘illegitimacy’.Being undocumented is never reason to be stripped of one’s fundamental human rights,” He asserted.

According to records of Migrante International, the number of undocumented Filipino workers deployed in different countries has reached approximately 900,000 in 2007. “This number has continued to increase over the years, especially in the light of continued unemployment and landlessness here in the Philippines. The growing number of undocumented OFWs worldwide is indicative of the ongoing crisis of forced migration and systemic economic crisis in the country.”

Martinez called on the Korean and Philippine governments to ensure the protection of undocumented OFWs in South Korea and to work for their legalization. “Our call is for regularization, not criminalization. Human rights, regardless of status, should not be violated. Undocumented migrants worldwide contribute greatly to the economies of their host nations and to the domestic economy as well in terms of their remittances.”
OFW assistance budget cuts

Kasamma-Ko’s Par also scored the Benigno Aquino III administration for not taking action to help the overseas Filipino workers including those deployed inSouth Korea.
“More than nine million OFWs are working in many countries around the world and they comprise over 10 percent of the population dependent on working overseas for their livelihood and the better future of their families. Since the 1970s up to this time, the succeeding Philippine governments including the present Aquino government have not done anything to improve employment opportunities in the Philippines but instead continued the labor-exporting policy,” he said.

“DFA Secretary Alberto Romulo admitted that this would paralyze the operations of Philippine embassies and consulates around the world. It would also mean reduced assistance to Filipinos in distress overseas. There have been too many OFWs who have died, disabled, ill, abused, jailed, stranded or in distressed situations who need the assistance of the Philippine Embassies or Consular offices, and this means adequate budget to aid and support OFWs,” he said.