“We now tell his killers, we refuse to be silenced. We would continue our quest for justice and we would pay our highest respects to Caloy’s memory by continuing the struggle for transparency, accountability and genuine public service.” – Ferdinand Gaite, Courage

MANILA — He was her only son. And nothing beats the pain of losing a son, especially when justice remains elusive to this day, a year since he was killed.

“Caloy was a good son and a friendly person. He had no enemies,” Carol Rodriguez, mother of slain union leader Carlos Rodriguez, tearfully recalled in a protest action in front of the Department of Justice.

Carlos Rodriguez, 41, or Caloy as dearly called by his relatives and friends, was gunned down in front of the Coca Cola plant near the intersection in Halang, Calamba, Laguna on November 12, 2010 by motorcycle-riding men while he was on his way home. He served as president of the Nagkakaisang Lakas ng Manggagawa ng Calamba Water District, a government employees’ union, and a member of the Confederation for Unity, Recognition and Advancement of Government Employees.

Rodriguez reportedly suffered four gunshot wounds, one on the neck, two at the back and one on his arm. He was the 22nd victim of extrajudicial killings under the new administration.

Love triangle was reportedly the initial findings of the police but Carol did not believe a word of it. “Everyday I hear my couple neighbors fighting. But it is not everyday that I hear someone killed,” she said, adding that she has enough reasons to believe that the killing of her son Rodriguez has a “political color.”

On November 11, Carol and her son’s colleagues in Courage called on the Department of Justice to do its part in resolving the killing. In fact, a year since Rodriguez was killed, the case has not seemingly progressed even an inch. 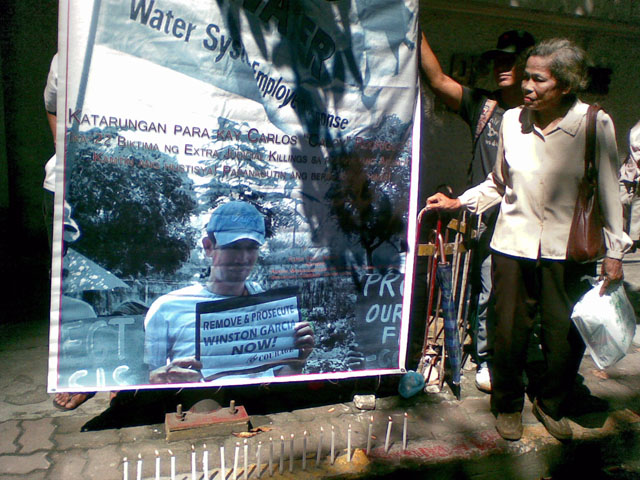 “I always believe that it is harder to catch a perpetrator of a crime who is in power than ordinary civilians. I see it on the news every day. How unfortunate that it had to happen to me,” Carol told Bulatlat.com.

Mastermind of crime, a ‘state agent?’

In an interview with Bulatlat.com, Courage national president Ferdinand Gaite said they have received reports that a certain “state agent” was behind the killing. He added, however, that they could not divulge more information on the case because it might compromise the on-going investigations.

What is evident, however, is that it is “apparent that (Rodriguez’s) relentless commitment to the working class and the people is what the perpetrators wanted to put to an end to by killing him,” Gaite said.

Gaite added that they have also received reports that Rodriguez was in the Order of Battle, the Armed Forces of the Philippines’s list of the so-called ‘enemies of the state.’ He said Rodriguez was actively involved in campaigning for progressive partylist groups last elections, which, according to the military are fronts of the Communist Party of the Philippines.

“The manner of how Caloy was killed is similar to other victims of extrajudicial killings, which is in broad daylight, by men riding a motorcycle,” Gaite said.

Carol, who is also a professor at Laguna State Polytechnic University, said she never thought that such tragic incident would happen. “Being a government employee, myself, I understand why my son was active in efforts to fight for their rights. His colleagues were able to receive their benefits because he fought for it.”

Courage, in a statement, said Rodriguez’s case is not isolated. They also have other militant and progressive public servants who were also victims of political killings under former president Gloria Macapagal Arroyo.

“Like Caloy, all were exceptional public servants murdered for daring to expose and oppose anti-people policies and programs. It is infuriating to see that years have passed and yet, no one has been arrested and prosecuted for these crimes,” Gaite said.

When asked for her message to the present administration, Carol said, “Justice! This is all I want.”

Gaite challenged President Benigno S. Aquino III and Justice Secretary Leila de Lima to immediately resolve Rodriguez’s killing and prosecute the people responsible for the crime. “We now tell his killers, we refuse to be silenced. We would continue our quest for justice and we would pay our highest respects to Caloy’s memory by continuing the struggle for transparency, accountability and genuine public service.”