“We felt the people’s desire and interest for a radio station they truly own long before this launch. Radyo Sagada is no longer a dream but a reality.”

After five months of test broadcasts, the people of Sagada converged at the town center to end almost a decade of hard work and anticipation.

Friends and supporters from Baguio, Manila and even abroad made the long trip to this famous tourist town to celebrate with the community and participate in the event.

“With this launching, Sagada proved once more its leadership in pushing for the people’s communication rights,” Kathleen Okubo, Radyo Sagada director said.

Radyo Sagada station manager Mary Carling for her part urged Sagadans and all Cordillerans to claim the community radio station as theirs. 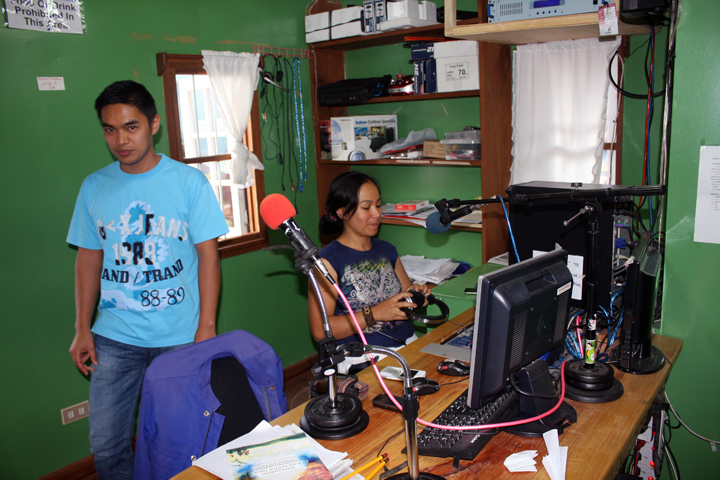 (Photo by Raymund B. Villanueva / Bulatlat.com)

“We will welcome anyone who wish to broadcast programs on Radyo Sagada, because it is owned, managed and operated by the people,” she said.

Their primary mandate is to give voice to citizens usually ignored by commercial or government-owned radio stations that number around 600 all over the Philippines.

Community radio broadcasters also generally lack formal training and education on broadcasting but there are many non-government organizations that give them free training and assistance.

While community radio stations may air commercial advertisements, proceeds are exclusively used for operations. Advertisers are also not allowed to influence editorial policies if they run counter to the pro-people advocacies of the station.
For instance, these stations almost never air pesticide and fertilizer advertisements if their peasant listeners advocate organic farming.

Community radio stations also do not allow government agencies, such as the police and the military, and politicians to dominate the airwaves and dictate on station programming.

Unlike in other countries such as Indonesia and Nepal, however, community radio broadcasting in the Philippines has hit rough patches lately.

On July 2, 2006, suspected elements of the 17th Infantry Battalion of the Philippine Army burned Radyo Cagayano 90.1 FM down in Baggao, Cagayan. Two leaders of the peasant organization Alyansa Dagiti Mannalon ti Cagayan (Alliance of Farmers in Cagayan) or Kagimungan, station owner and operator, were subsequently killed.

Several radio stations under the Tambuli Network and Masinag Farmers’ Network also closed down due to either lack of support or harassments from the military and local politicians.

It took nearly a decade to establish Radio Sagada.

Bayan Muna provided the initial funds for its establishment early in the last decade. But plans hit snags, including several changes in personnel that delayed the establishment of the station and difficulties in securing a broadcast license from the National Telecommunications Commission.

Since 2009, however, the people of Sagada struck a partnership with the Philippine Misereor Partners Inc (PMPI), MIVA (Ministerio Internacional Vida Abundante), Northern Media Information Network (or NorMIN, publisher of the Northern Dispatch Weekly) and Isis International-Manila to complete the establishment of the station.

NorMIN acted as Radyo Sagada’s project holder while PMPI provided financial support. MIVA for its part provided some of the equipment while Isis-International conducted trainings.

Radyo Sagada uses the broadcast franchise of the National Council of Churches of the Philippines while Kodao Productions assisted in earlier trainings and equipment procurement.

Radyo Sagada is a member of the World Association of Community Radio Broadcasters (AMARC) that consistently provided encouragement to the station. AMARC is an alliance of more than four thousand community radio stations worldwide.

Radyo Sagada is managed by a Board of Directors that includes community leaders and NorMIN officers.

“We expected a simple community radio station, but Radyo is turning to be a sub-regional station already,” Sagada mayor Eduardo Latawan said.

In five months of test broadcast, hundreds of listeners send SMS messages daily, usually to greet friends and relatives on air and request for favorite songs.

“We felt the people’s desire and interest for a radio station they truly own long before this launch. Radyo Sagada is no longer a dream but a reality,” Carling said.

Radyo Sagada signs in at eight o’clock in the morning and signs off at seven in the evening.

“Music and entertainment programs still dominate our programming, but we have news and public affairs shows in the morning, at noon and in the evening,” Carling explained.

A community radio broadcasting activist, Miglioretto is a consultant to Radyo Sagada. She organized trainings for the station’s current crop of broadcasters and staff.

This modest effort has been fruitful, despite difficulties. With the commitment and dedication of all concerned, and ever mindful of the common good, the community radio will be sustained and shall continue to flourish, and advance information and media for the people’s well being and over all development.” Okubo said. and international human rights bodies.