You Are Here: Home → 2011 → November → 18 → Under Aquino, no justice for victims of Hacienda Luisita massacre

Under Aquino, no justice for victims of Hacienda Luisita massacre

“The Cojuangco-Aquinos used and abused all legal means to their advantage and interest of further controlling the lands.” – Rep. Rafael Mariano of Anakpawis

HACIENDA LUISITA, Tarlac City — Families and colleagues in the struggle of farmers and farm workers of Hacienda Luisita continue to yearn for justice, seven long years since the infamous Hacienda Luisita massacre that claimed the lives of seven farmers.

“We appreciate the support from our colleagues because it helps us to become stronger. Somehow, I feel that there is still hope that justice would be served,” Gabby Sanchez, 61, father of Juancho Sanchez, one of the slain farmers, told Bulatlat.com. 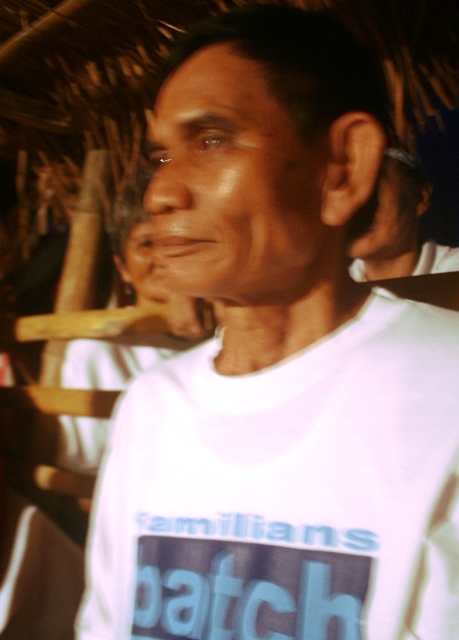 Pastor Gabby Sanchez yearns for justice for his son Juancho, one of the victims of the Hacienda Luisita massacre. (Photo by Janess Ann J. Ellao / bulatlat.com)

Juancho, then a third year mechanical engineering student, was forced to stop going to school to support his family’s daily needs. He worked as a jeepney driver. His father, a pastor of the United Church of Christ of the Philippines (UCCP) who served an Aeta community, had meager allowance.

But on November 16, 2004, in the picketline of the farm workers of Hacienda Luisita, Juancho was killed. He was only 20 years old. “He went there to provide water for the striking workers,” Sanchez said.

Sanchez said that his son Juancho is a good and helpful person. In fact, aside from his support to the farm workers of Hacienda Luisita, his son Juancho was also known to be generous to his high school classmates despite their living conditions. “He would share his snacks to his classmates when they do not have one. His classmates told me during his wake.”

Their family continues to demand for justice, even now under President Benigno S. Aquino III’s administration, whom he deems would not look after for the welfare of peasants. “Those who were responsible to the massacre should be held liable. The victims sacrificed their lives for this cause,” he said.

A caravan of some 30 vehicles left Chino Roces Bridge, formerly known as Mendiola, on November 16 at around 10:30 a.m. for Hacienda Luisita in Tarlac City to commemorate the seventh year since the Hacienda Luisita massacre. Families, colleagues and friends of the seven victims of the killing still clamor for justice.

More than 5,000 farm workers went on strike on November 6, 2004. Ten days later, soldiers, using an armed personnel carrier of the Armed Forces of the Philippines (AFP), rammed through the picket line. State security forces, including the police and reportedly private security guards opened fire at the peasants, killing the seven farmers and wounding more than a hundred. There were six more reportedly killed but their bodies were never found. Union and peasant leaders could not identify them as they were seasonal workers. 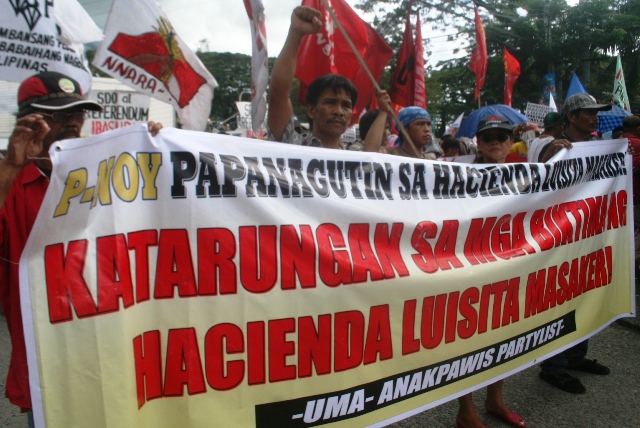 Farm workers and supporters stage a 30-vehicle caravan to Hacienda Luisita to mark the seventh anniversary of the massacre. (Photo by Janess Ann J. Ellao / bulatlat.com)

The military claims that the violence was provoked by the striking farmers. A report by the Philippine National Police, in fact, claimed that the “initial burst of gunfire, single shots in succession, came from the ranks of the striking workers after they crossed the gate and invaded the CAT (Central Azucarera de Tarlac) Compound.”

“Mr. Aquino, his family and his predecessor,” referring to former president Gloria Macapagal Arroyo, “connived to launch an armed attack against the peaceful strike of the farm workers, who were demanding for just wages, decent working conditions and re-instatement of union officials and members who had been retrenched for addressing the workers’ plight,” the groups said in a joint statement.

The two peasant organizations added that President Benigno S. Aquino III feels “no remorse for the people who made their riches by continuing to deny justice and depriving the farmers and farm workers of hacienda Luisita of their rights.”

No justice under Aquino

Upon arriving in Hacienda Luisita, farmers and their supporters staged a short protest action in front of Camp General Servillano S. Aquino, home of the Northern Luzon Command of the AFP, to hold the military accountable for the massacre and the continuing militarization in disputed lands.

“Militarization violates our rights. They have increased military presence, especially here in Barangay Balete. Soldiers patrol the village and, at times, talk to residents,” Sanchez said.

The protesting farmers then proceeded to Hacienda Luisita Gate 1, the site of the massacre, where they offered candles for their slain colleagues. They also burned an effigy of Aquino, which was a landlord scarecrow, to reiterate their calls for land and justice.

Danilo Ramos, secretary general of Kilusang Magbubukid ng Pilipinas (KMP) said the victims of the Hacienda Luisita massacre would “never attain justice under the administration of a Cojuanco-Aquino.”
“We have seen how President Aquino protects his family’s illegal and immoral stranglehold over Hacienda Luisita; much less allow his government to indict and punish his relatives, the main culprits in the infamous Hacienda Luisita massacre,” Ramos said. He added that there is no way that the Cojuangco-Aquino will ever let go of the lands.

Now that he is the “chief political representative of the Cojuangco-Aquino,” Anakpawis Rep. Rafael Mariano said Aquino will not do anything to address the injustices on the massacre victims and the farmer beneficiaries of Hacienda Luisita. He added that Aquino is even allowing Arroyo, who is also a respondent to the charges filed by the peasants on the massacre, to “escape without being punished for her many crimes against the farmers.”

Arroyo has been on the news for the past few days attempting to leave for abroad purportedly formedical treatment. Her critics deem such moves as a way to escape from cases yet to be filed against her.
“We hold Arroyo and the Cojuangco-Aquinos accountable for the Hacienda Luisita Massacre,” Mariano said.

Agrarian reform slows down under Aquino

Sanchez said he is not expecting Aquino to act for the welfare of farmers and farm workers all over the country. The Cojuangco-Aquinos, for the past several decades, have managed to evade land distribution of Hacienda Luisita. 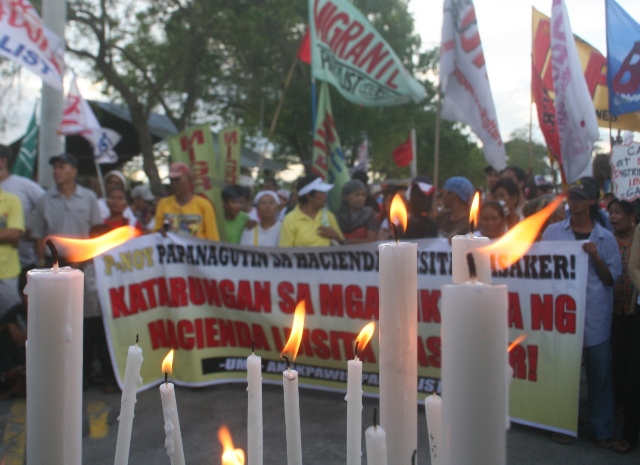 Candles lit on top of the marker of the Hacienda Luisita massacre. The shooting seven years ago that claimed seven lives took place at the Gate 1 of Central Azucarera de Tarlac. (Photo by Ronalyn V. Olea / bulatlat.com)

With this, agrarian reform in other land dispute cases have also slowed down when compared to the previous administration.

According to Ibon Foundation, an independent think tank, land distribution is slower under Aquino’s first year in office than his predecessors. For one, Aquino’s average monthly land distribution under the Department of Agrarian Reform is only 9,866 hectares when the Arroyo government had a monthly average of at least 10,426.

Aside from the slow land distribution are also rampant cancellation of document titles, land use conversions and foreign land deals, which, said Ibon Foundation, “undermine efforts for land reform.”
In Nueva Ecija, for one, there was massive cancellation of certificates of land ownership, certificates of land transfer and emancipation patents covering 1,929 hectares of land to give way to various non-agricultural projects.

According to Ibon Foundation, land distribution must translate to land being transferred to the tiller for productivity and in support of the people’s needs. “The Aquino government’s slow pace in land distribution coupled with its aggressive bid to lease the country’s productive land to investors makes the future of land reform in the country bleak,” the research group added.

As for Hacienda Luisita, Ibon expressed its concern over the classification of the disputed lands as an industrial estate under the Central Luzon Development Plan. “The plan dismisses demands to surrender Luisita to the more than 10,000 farmworkers who have tilled and made the hacienda productive through the decades.”

“The Cojuangco-Aquinos used and abused all legal means to their advantage and interest of further controlling the lands. The Luisita massacre and the decades-old land dispute at the 6,453 hectares land estate would serve as a permanent reminder of the Cojuangco-Aquinos’ crimes against farmers,” Mariano said.

“The seven martyrs of the Hacienda Luisita massacre deserves nothing less than justice along with their supporters who succumbed to bullets and knives,” UMA and Ambala said, “Their only fault was siding with the oppressed farm workers. They will be remembered as heroes of the toiling masses and the aspirations of the living to continue the fight for justice and land.”