Debt servicing remains the priority with next year’s debt payments standing at P735.6 billion ($17.1 billion), dwarfing the combined funding of all social services for 2012 amounting to a mere P575.8 billion ($13.39 billion).

This is what various people’s organizations are calling the Philippine Senate’s surprisingly swift approval of the National Expenditure Program (NEP) for 2012 or the 2012 budget. Migrante International, youth and teachers’ organizations said the Senate railroaded the approval of the P1.8 trillion (US$40 million) budget that will do nothing to alleviate the Filipino people’s poverty.

Migrante chairman Garry Martinez said the 2012 budget is both “anti-poor and pro-privatization.” He said the allocations for services intended to assist overseas Filipino workers and their families are shamefully scanty, saying that aggregate funds for these as placed in concerned agencies like the Department of Foreign Affairs, Department of Labor and Employment, Philippine Overseas Employment Administration and other affixed agencies remain less than one percent of the total whole.

“Budget on items for welfare and services and reintegration for OFWs were not given additional allocations,” he protested.

The group agreed with Sen. Joker Arroyo that the Aquino administration’s 2012 budget is not a budget for reform.

“It’s clearly a budget for debt-servicing, privatization and militarization. The 2012 budget reflects Aquino’s priorities in governance and economy – privatization in favor of big businesses, subservience to foreign interests, a more catastrophic implementation of a labor export policy, and intensified counter-insurgency at the expense of a just and lasting peace,” Martinez said.

Martinez said Migrante International’s chapters and networks in various countries will be holding indignation rallies against the anti-OFW and anti-poor budget beginning November 12. In the Philippines, the group will join other sectors in a protest camp-out in Mendiola from December 6 to 8. OFWs and families will end the year with a resounding protest on December 18, International Migrants’ Day.

Various organizations led by alliance Kilos Na Laban sa Budget Cuts called the budget appropriations as having a “twisted” orientation. The alliance is comprised of more than 100 organizations from various sectors nationwide.

Vencer Crisostomo, national chairman of Anakbayan and convener of Kilos na Laban sa Budget Cuts, said Aquino’s allies in the Senate passed it without major changes in the allocation for state universities and colleges, health and other social services. 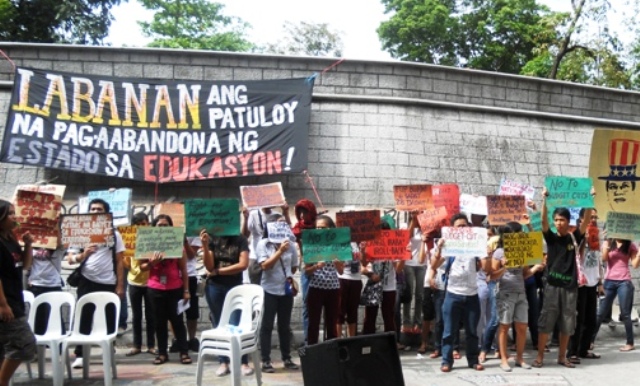 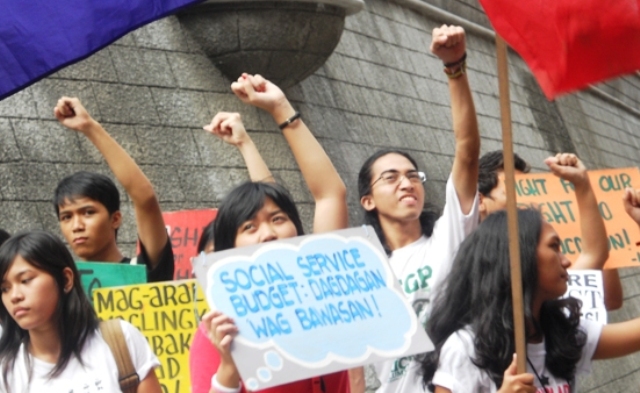 Students of the Polytechnic University of the Philippines (PUP) walked out of their classes, Nov. 24, against budget cut in education and other social services.(Photos by Anne Marxze D. Umil / bulatlat.com)

He assailed the statements of majority Senators claiming that the budget they passed is “biased for the poor.” He also said the groups are “extremely disappointed” that “despite widespread protests, budget remains in favor of debt servicing, profits, dole-outs and the military.”

Earlier, nationwide strikes and protest actions were waged by various groups to protest the budget cuts. More than 20,000 participated in the protests. State universities and colleges (SUCs) have been holding nationwide protests to call for re-channeling of significant government spending for SUCs and social services.

The Philippine Association of State Universities and Colleges (PASUC) had earlier asked the Senate to, at the minimum, re-channel the P500 million (US$11.6 million) allotted to the Commission on Higher Education (CHED) to SUCs, and the two billion pesos allotted under Miscellaneous Personal Benefits Fund (MPBF).

Crisostomo said Aquino’s allies in the Senate even tried to slash the budget further. The budget was later reworked to reflect the version of the House of Representatives which reflected an additional P200 million ($4.65 million) for a particular item for the Philippine General Hospital (PGH), which is under the budget of University of the Philippines (UP).

Ultimately, the cuts were affirmed and no significant changes in the budget for SUCs were approved.

The Senate approved budget reflected meager spending for social services. Despite claims by the Aquino administration that education is “top priority,” P238 billion ($5.465 billion) for basic education is actually only 2.7 percent of the country’s Gross Domestic Product (GDP), far from the six percent the United Nations Educational, Scientific, and Cultural Organization (UNESCO) recommends. The 2012 health budget, which at P44 billion ($102 million) is only 0.5 percent of the GDP, as compared to the World Health Organization (WHO) recommended six percent.

Meanwhile, debt servicing remains the priority with next year’s debt payments standing at P735.6 billion ($17.1 billion), dwarfing the combined funding of all social services for 2012 amounting to a mere P575.8 billion ($13.39 billion).

This “misallocation,” Crisostomo said, shows that the budget is not biased for the poor but for foreign creditors and profits of corporations.

“If only we could arrest and put them (the Senators) in jail for deceiving the people. They even said that the budget is biased for the poor, but it is anti-people. It doesn’t serve the interest of the people,” said Rommel Aguilar, Student Regent of Polytechnic University of the Philippines (PUP). He added that dole-out programs like Conditional Cash Transfer program is not what the people need.

“From day one of budget hearings in Congress, we already registered that the student are against the proposed budget with lesser allocation to SUCs. But the government is deaf to our calls, instead of reviewing and reverse the national budget for 2012, the Senate railroaded its passage and made no changes at all,” said Clara Merced, a fourth year student taking up Math in PUP.

For Joshua Ramos, 18, hotel and restaurant management student in PUP, there is a reason to continue to fight for a greater subsidy in social services like education. “It is obvious and we experience it every day. The lack of chairs, scorching heat and narrow classrooms are reasons enough to continue opposing budget cut.”

Aguilar also noted the overwhelming number of students that participate to the protest actions against budget cut. “The scholars of the nation are willing to fight for a greater subsidy on education since we are experiencing it here in our university,” said Aguilar, referring to the shortages of facilities in PUP.

The student groups called on students from other schools to join the “Days of Rage” on November 24-25 and the “protest barrage” at the bicameral meetings on November 29.

“On Nov. 29 we, together with other sectors will storm the bicameral meeting to prevent this anti-people budget pass,” said Aguilar.

A nationwide camp-out protest during the first week of December is also being set against “the rotten ruling system favoring the few and further oppressing the majority.” Themed along “occupy” lines, plans are being drawn for days of mass protests.

In Davao City, teachers under the Alliance of Concerned Teachers also slammed the Aquino budget and the administration’s insistence on implementing the K+12 program. The K to 12 orK+12 program makes kindergarten compulsory and adds two more years to secondary education or high school.

“Critical education resources such as books, classrooms and even teacher items are already in shortage, and the government still pushes with the full implementation of K+12? This is laughable,” said Elenito Escalante of the Kahugpungan sa mga Magtutudlo ug Kawani sa Edukasyon sa Mindanao (KAMKEM) – Act.

Five months after the implementation of the first phase of the “K to 12 Basic Education Program” of the DepEd, the group maintains its stand that the program does not address the problem in the basic education sector – the lack of budget allocation from the government. Escalatante said public schools are hardly in a position to address the expected increase in the enrollment because of the shortages.

“When the government continues to implement the program, the demand for said resources will also increase, consequently increasing the rate of shortage” he pointed out.

Currently, the demand for new teachers is at around 100, 000 but the government is only planning to hire an additional 10,000.

“We teachers know that it is not the length of the education cycle that caused the diminishing quality of education. The additional two years in high school only magnifies the problem,” Escalante said.

Kamkem -Act has joined hands with Parents and Teachers Associations (PTA), youth and students groups, and other sectors of the society in its effort to register its strongest opposition against K +12.