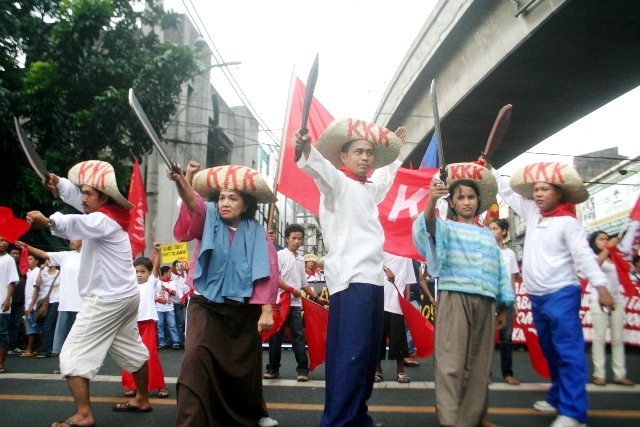 MANILA – On the occasion of the 148th birthday of Filipino revolutionary hero Andres Bonifacio, workers and peasants donned the Katipunero getup and marched to Mendiola (now Chino Roces) brandishing bolos that were hand-painted with long-time peoples’ demands. These include the demand for land, decent jobs and wage hikes, housing and livelihood for the urban poor.

“Andres Bonifacio was born from a working class family. He himself worked hard for a living, fought for land and for genuine sovereignty,“ said Elmer “Bong” Labog, national chairman of KMU, at the opening of their program at Mendiola. 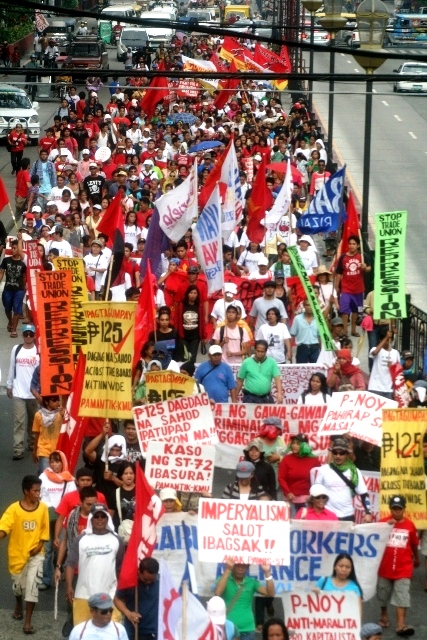 Recalling Bonifacio’s struggle against slave labor, the labor group took the occasion to air once more their demand for a legislated, nationwide P125 wage hike, even as they expressed disapproval of a new labor department order which “fine-tunes” an employment policy that, they said, should have been scrapped long ago.

“Today as we pay tribute to a great revolutionary, a great Filipino, an anakpawis (toiling masses), we relive his revolutionary spirit against oppression and exploitation,” said Joel Maglunsod, Anakpawis executive vice president. Because the “basic problems and demands of the Filipino masses” that pushed Bonifacio and the Katipuneros to revolt in the 19th century remain operative until today, the protesters called on Filipinos to be like modern-day Andres Bonifacios. 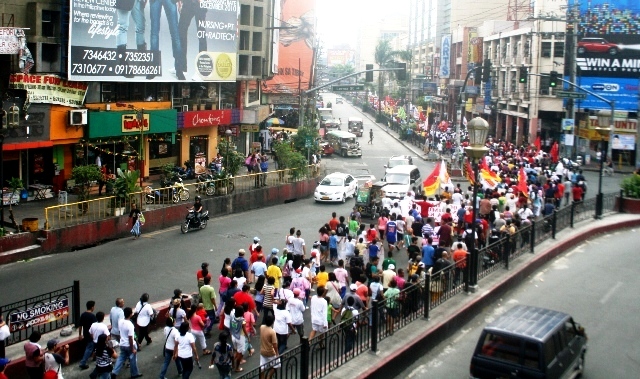 The workers contingent of the protesters converged earlier at Abad Santos and marched to Morayta to meet with the urban poor delegation led by Kadamay (Kalipunan ng Damayang Mahihirap) who converged at Welcome Rotonda. Together they marched to Mendiola where they started their program remembering Andres Bonifacio and what he fought for with the swift burning of the US flag. Other similar protests were reportedly conducted in other Philippine cities.

“Andres Bonifacio would not be pleased with the kind of government leaders the Philippines has,” most leaders concluded in their speech at Mendiola. They criticized the Aquino government for pushing “an even bigger sell-out” of Philippine sovereignty and patrimony through the current charter change proposals and new treaties with the “Imperialist US.” While even government leaders are commemorating heroes like Bonifacio, they are allowing greater foreign control over the country’s resources, the protesters said. 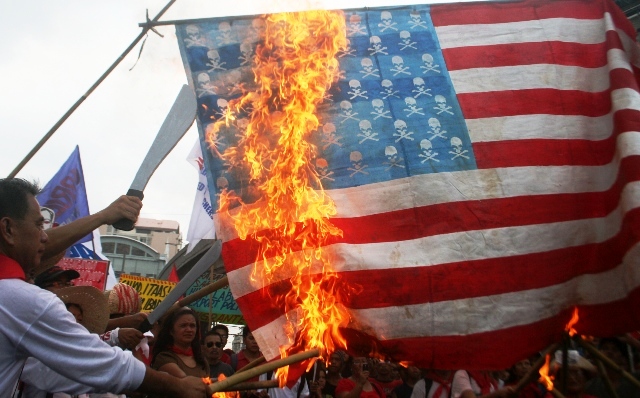 “Bonifacio was born at the height of feudal exploitation in the country – it is happening still until now,” said the narrator in a street play the workers presented before fellow rallyists and the media at Mendiola.

The protesters pointed to the Hacienda Luisita as a prime example of why “the country needs more Andres Bonifacios.”

“We don’t believe in ‘just’ compensation,” said Labog, referring to the recent Supreme Court decision concerning the decades-long land dispute at the Cojuangco-controlled hacienda in Tarlac. The said hacienda has bred two national presidents to date, Corazon Cojuangco Aquino and the current president, Benigno “Noynoy” Aquino. But the fierce land struggle there had also been one of the biggest reasons for at least two massacres that victimized mostly peasants. One of which happened under the presidency of Cory Cojuangco-Aquino. The other happened during a labor dispute at the premises itself of the Hacienda Luisita, with the security aides of then Rep. Benigno “Noynoy” Aquino tagged by witnesses as some of the gunmen.

“‘Just’ compensation is unacceptable, considering the Cojuangcos have benefited for a long time from the farmers’ hard work at Hacienda Luisita,” said Labog. Peasant and labor groups are one in questioning the Supreme Court’s decision that would require farm workers to spend almost P5 billion ($116 million) to reclaim lands that had been “grabbed” from them by the Cojuangcos. 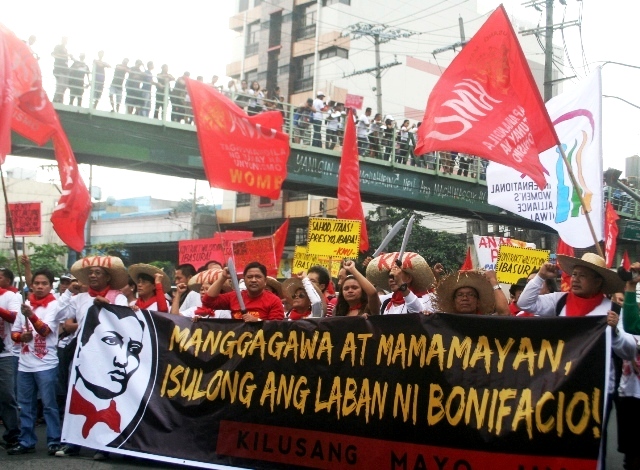 Willy Marbella of the Kilusang Magbubukid ng Pilipinas received the loudest cheers when he mentioned in his speech that in Philippine countrysides today, other modern-day Andres Bonifacios fighting feudal exploitation use not just bolos but high-powered firearms, and they reportedly manage through the community’s support and mass campaigns to lower land rent and usury in some areas of the country. The experience contravenes the “real estate transaction-like” nature of so-called land reform under the government.

Much like how Andres Bonifacio had rejected the foreign colonizers in his day, the Filipino public, said Marbella, should also reject Noynoy and his government’s anti-people policies.