You Are Here: Home → 2011 → December → 5 → OFWs to hold protest camp in Mendiola on day of execution of Filipino in China

“We can’t stand idly by and allow another OFW to be executed because the Philippine government failed to exert all diplomatic means to save him. We call on all Filipinos to come together and call for the commutation of our kababayan’s sentence in China.” – Migrante International

MANILA — The global alliance of overseas Filipino workers (OFWs) Migrante International today slammed “government neglect” regarding the case of a 35-year-old Filipino who is reportedly scheduled for execution in China on December 8. The group plans to hold a protest camp-out in Mendiola on the said day to highlight what it said as the Aquino administration’s shameful lack of support for OFWs.

The Department of Foreign Affairs (DFA) recently announced that the High People’s Court of the Guangxi Zhuang Autonomous Region had convicted the Filipino of smuggling 1.495 kilos of heroin into China.

The man’s family instructed the DFA not to release to the public his name and where he lives in the Philippines. 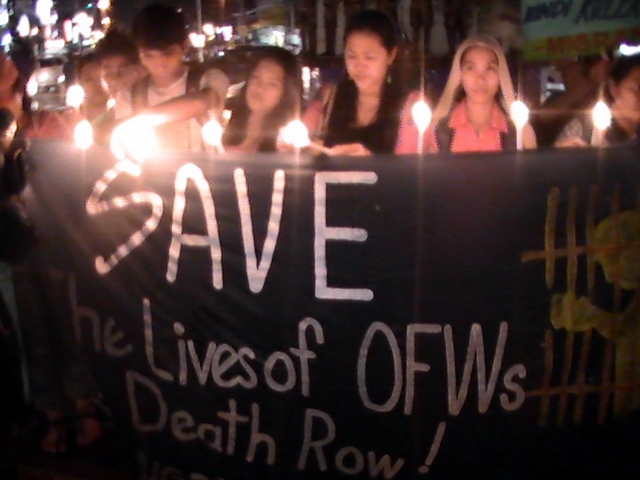 Migrante International lights candles in a protest action in Boys Scout Circle for the OFW in deathrow in China(Photo by Janess Ann J. Ellao / bulatlat.com)

Migrante International chairman Garry Martinez said the administration of Benigno Aquino III has not been transparent in its processes of providing assistance and negotiations with the Chinese government.

“In the cases concerning Filipinos on China death row, we have brought them to the attention of the government as early as February last year, way before the execution of our three kababayans there last March. Now the Aquino government is falling all over itself supposedly trying to help. The countdown to the execution has begun, but its stepping up its efforts only now,” he said.

The labor leader called on the Aquino government to exert all possible means to save the life of the Filipino on death row. “We can’t stand idly by and allow another OFW to be executed because the Philippine government failed to exert all diplomatic means to save him. We call on all Filipinos to come together and call for the commutation of our kababayan’s sentence in China.” 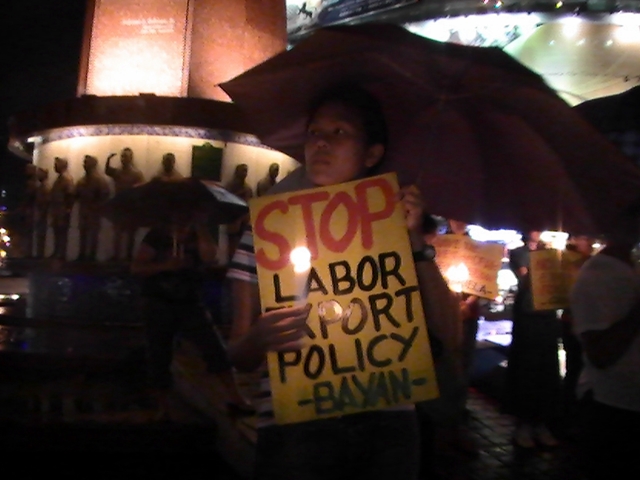 Based on Migrante’s monitoring, there are currently 125 OFWs in death row. Of the 125, 85 are drug-related and 79 of these are in China jails. The rest are in the Middle East, Malaysia and Thailand.

Malacañang for its part said that it has exhausted all legal efforts. President Aquino has reportedly written to letter to Chinese] President Hu Jintao. Presidential Spokesperson Edwin Lacierda also said that the Beijing government has not issued a favorable response to the Philippine request. This, he said, was despite the representation made by Foreign Affairs Secretary Albert F. del Rosario and former ambassador to China Francisco L. Benedicto with the Chinese government and top officials of the Supreme People’s Court of China . The Philippine officials reportedly made an appeal for the mitigation of the sentence.

No aid left for OFWs

Martinez also insisted that OFWs continue to suffer neglect from the Philippine government.

“From budget cuts to missing Overseas Workers Welfare Assistance (OWWA) funds, no aid is left for our OFWs. They slash funds for direct services, pass on the burden to OFWs through various fees and collections, and then they plunder those very funds that came from our OFWs’ hard work and sacrifice,” he said.

A report by the Commission on Audit (COA) revealed that OWWA officers overseas failed to remit more than P21 million OWWA funds to their Manila account. Direct services for OFWs also suffered cuts in the 2012 national budget, with aggregate funds for direct OFWs services getting only a share of less than one percent, or .01 percent of the P1.8 trillion national budget.

“How then can we expect the government to provide much-needed legal assistance to OFWs in distress, especially those on death row when there are almost no funds for them?”

Migrante has also put together a schedule of activities to highlight the sorry plight of OFWs. On December 4 at 5 p.m., it will led a candle-light ceremony at St. Peter’s Parish, in Commonwealth, Quezon City . The following day, there’ll be a similar activity in coordination with the “Save the Lives of OFWs on Death Row” Alliance, in front of National Council of Churches in the Philippines (NCCP) Building, EDSA near Quezon Avenue . On Dec. 6, youth and student groups will join the Mendiola camp out. On the 7th, there will be a nationwide noise barrage for justice and jobs and a vigil at Mendiola starting 5 p.m.. On Dec. 8 at 5:30 a.m., there will be a symbolic ceremony still in Mendiola while later that same day, supporters and families of OFWs led by Migrante will hold a protest march from the Far Eastern University (FEU) along Morayta and from there proceed to the historic bridge.