Detained artist Ericson Acosta and other political detainees all over the country are on hunger strike.

They began their strike last Saturday, December 3, 2011, as part of the campaign to free all political prisoners in the country. The hunger strike and sympathy fasts would continue until December 8. Other forms of protests are also being held in Camp Bagong Diwa and Batangas Provincial Jail.

Acosta, in particular, began his hunger strike to expose the particular circumstances of his arrest and continued unjust detention.
Acosta is an artist, journalist and cultural worker who was arrested by members of the Armed Forces of the Philippines on February 13, 2011 in Barangay Bay-ang, San Jorge, Samar province in the Eastern Visayan region. He faces trumped-up charges of illegal possession of explosives and is currently detained at the Calbayog City sub-provincial jail. 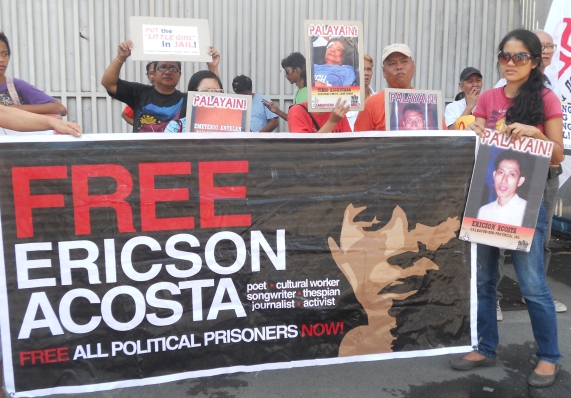 The UP activist’s counsel has filed a Petition for Review of his case before the Philippine government’s Department of Justice (DOJ) last September 1.

Acosta’s supporters have called on authorities, particularly the Department of Justice , to immediately withdraw the fabricated illegal possession of explosive complaint lodged by the military against the poet. In a written message, Acosta stressed that it was “ utterly baseless for him to undergo a full-blown trial for this trumped-up charge.”

“I am the one who has the right to charge the state elements responsible for violating my human rights,” he said.

One of his particular demands is to pull out the highly irregular if not illegal presence of a squad of military men near his place of detention. A platoon of soldiers from the 87th IB were first deployed in the nearby barrio since July in the pretext of military operations, but it has become apparent that the soldiers are there to “guard” Acosta.

In a report, Anakpawis party-list Representative Rafael Mariano in his recent visit to the Calbayog jail was said to have directly witnessed how soldiers listen in to Acosta’s conversations with visitors.

Human rights groups said it was necessary to maintain the civilian nature of the Samar sub-provincial jail. They also said that it was a challenge for civilian authorities to assert their power over these military “invaders.”

“This troop deployment, and the overkill security arrangement during Acosta’s first court appearance where he was made to ride the jail vehicle as a lone detainee in the midst of soldiers in full battle gear “(these) are symptoms of one affliction of paranoia named Fascism,” said the Free Ericson Acosta Movement.

Earlier last month, Acosta was named as one of the finalists of the 2011 Imprisoned Artist Prize at the Freedom to Create Awards Festival in Cape Town, South Africa . He has also been nominated as 2011 Wiki Pinoy of the Year by Wiki Pilipinas. Last December 3, supporters held a cultural event entitled “POLDET: Panata sa Kalayaan ng mga Detenido Politikal” in Access Point Bar, Scout Borromeo Quezon City, and another is scheduled this coming Dec. 10, International Human Rights Day. 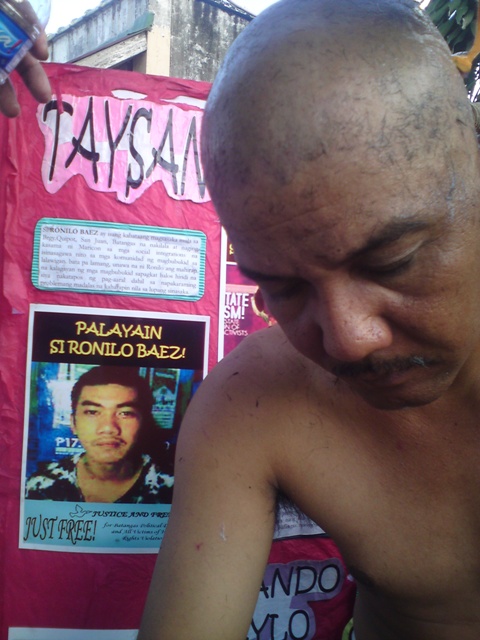 Supporters of political prisoners in Southern Tagalog shaved their heads in solidarity of the latter’s hunger strike. (Photo courtesy of Bayan-Batangas / Bulatlat.com)

In a related event, 16 political prisoners together with five hundred inmates charged with common crimes began their their hunger strike in Compostela Valley Provincial Rehabilitation Center in Mankilam, Tagum, Davao del Norte last November 28. They called on the Aquino government to heed what they said were “very legitimate demands.”

The prisoners of conscience are calling on the government to provide additional courts to expedite resolution of their cases. Currently, there is there is only one RTC in the region with one judge handling more than 3,000 cases. They are also demanding improvement of services for prisoners; medical services for the sick and elderly; and most importantly the unconditional release for all political prisoners.

In the meantime, Southern Tagalog human rights advocates have launched the Human Rights Quilt Project. Political detainees, students, out of school youths, artists, professionals and members of religious groups have begun to put together a 12 feet t by 24 feet quilt. They said the project aims to engage people in human rights issues.

Human rights groups in the region have also embarked on what they call the 10,000 Letters for Liberty campaign. They said they want to gather 10,000 letters from different groups and individuals from all walks of life to appeal to the Office of the President, the DOJ and other concerned government institutions to free all political prisoners in the country.

Some 30 political prisoners in Southern Tagalog shaved their heads bald as part of their campaign for release. Karapatan-ST secretary general and human rights activist Glen Malabhanan said the activity was also a support solidarity to the ongoing nationwide hunger strike launched last December 3 by other political prisoners in the country.

Outside the Batangas jail, about 21 supporters held sympathy fasts.