You Are Here: Home → 2011 → December → 8 → Police use violence against protesters marching to Mendiola again

Police use violence against protesters marching to Mendiola again

“Prohibiting such activities, and branding it as “seditious,” goes against the core principles of democracy, transparency and accountability which are central in Aquino’s vision of a straight path and contrary to the call of the Aquino administration for active public participation in the governance of our country.” – UP Resident Alfredo Pascual

“The state violence exercised by the Aquino administration against the protesters is reminiscent of the Calibrated Pre-emptive Response (CPR) and other human rights violations under former president Gloria Macapagal-Arroyo. It is deeply alarming and ironic that the Aquino administration confidently inflicts violence against peaceful protesters during the international celebration of human rights week,” the progressive bloc said in a statement sent to Bulatlat.com.

At about 3:00 p.m the protesters who marched from Plaza Miranda were once again prevented from reaching Mendiola. The police blocked the protesters near Bustillos church, a few blocks away from Mendiola, and used water cannons and truncheons to stop them. Some of the protesters were injured and was arrested by the police. According to Anton Dulce of Anakbayan who joined the protest, three were seriously injured and five protesters are still being detained – three PUP students, one member of Anakpawis and a member of Karatula cultural group – by the police at the Western Police District.

“Who would not revolt in a country where fascism is widespread? The police should apprehend criminals and not innocent people. The straight path of Aquino is zigzaged. Another falsehood in the litany of his promises,” Jing Paz, public information officer of College Editors Guild of the Philippines (CEGP) said in text message sent to Bulatlat.com.

Paz also said the police told them that Mendiola is now a no rally zone. The protesters had their campout at Bustillos Church in Manila near Mendiola where they also held a vigil for the overseas Filipino worker who is about to be executed in China on Thursday, Dec. 8.

The Kilusang Mayo Uno who joined youth and students on the second day of the protest also condemned the use of violence by the police against the protesters. “We condemn the Aquino government’s repression of our right to hold protests even as it fails to solve the growing hunger and poverty in the country. The president, a beneficiary of the Hacienda Luisita massacre for which he has not sought justice, is showing a glimpse of the iron hand hidden under his velvet glove,” said Elmer “Bong” Labog, KMU chairman. 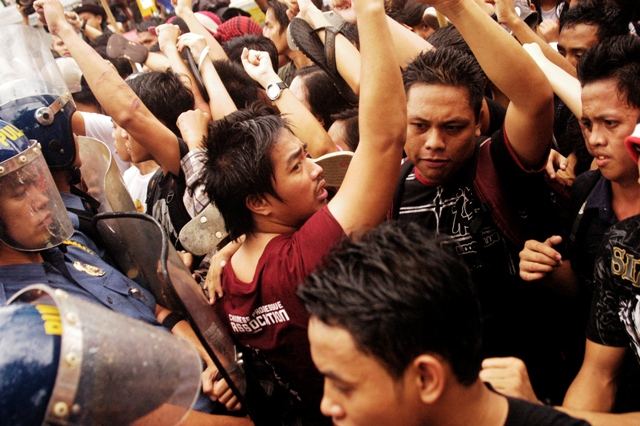 Youth and students together with other groups will still occupy Mendiola up to International Human Rights Day on Dec. 10. (Photo courtesy of Alvin Tenedero / Bulatlat.com)

“Paranoia is the word. Why prohibit mass ups in Mendiola?” Vencer Crisostomo, chairman of Anakbayan said in his twitter account.

Palatino, in a statement, said that the police brutality illustrated the paranoia of the Aquino administration amid growing discontent among the people for its failure and refusal to address the worsening social crisis.

He added that the government even attempts to mask the crisis by citing the new methodology lowering the poverty threshold to P46 ($1.06) per Filipino per day thereby deceptively reducing the number of poor people by as much as 5.3 million.

Palatino said that instead of properly addressing the roots of poverty, the Aquino government resorts to band-aid solutions like the Conditional Cash Transfer program and even attempts to deceive the people by doing statistical magic to reduce the number of poverty cases in the country.

“The strikes and occupy protests sweeping the world are brewing here in the Philippines because of the social crisis the Filipino people are getting tired of experiencing. The Aquino government should genuinely address the legitimate concerns of the people. No cosmetization of the crisis or exercise of fascism on the part of the government could prevent the people from asserting their rights and welfare,” he added.

“This is a legitimate demand” 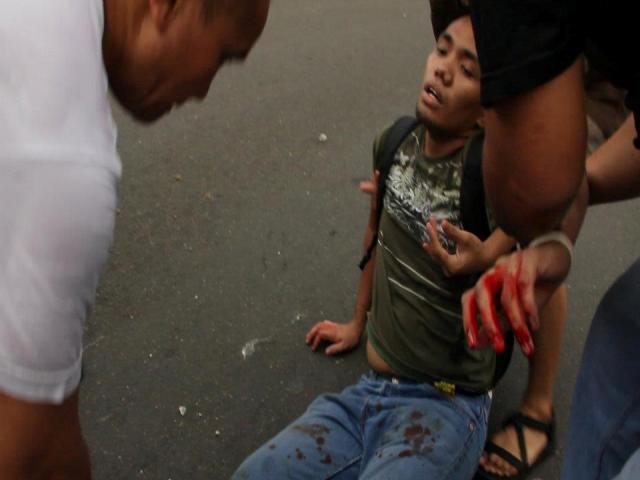 Rg Tesa, a student activist from UP Diliman is one of the three injured. (Photo courtesy of Tudla Productions / Bulatlat.com)

UP President Alfredo Pascual said, in a statement, that what the students are calling for – an increase in the subsidy of state universities and colleges, among others – is a legitimate demand.

“Their protest action is a legitimate expression of civil and political rights guaranteed under the Constitution, and in accordance with the UP Charter (RA 9500) which instructs UP to foster a commitment to serve the Filipino nation and humanity, and in the pursuit of these principles, relate its activities to the needs of the Filipino people and their aspirations for social progress and transformation,” Pascual said.

He added that prohibiting such activities, and branding it as “seditious,” goes against the core principles of democracy, transparency and accountability which are central in Aquino’s vision of a straight path and contrary to the call of the Aquino administration for active public participation in the governance of our country.

Labog said, “We are calling on all sectors of society, especially the country’s legislators and religious leaders, to condemn the Aquino government’s use of violence against participants in the Mendiola campout protest. The repression of protestors for two days now is a bad precedent which we should all condemn,” he added.