You Are Here: Home → 2011 → December → 9 → A political prisoners’ life and struggles inside prison

A political prisoners’ life and struggles inside prison

While weak from the effects of the hunger strike, political prisoner Ericson Acosta relates how he adjusted to life in prison, the difficulties being faced by his co-inmates who come from families of peasants and workers, and the struggles of political prisoners under an administration that remains deaf , mute, and blind to their situation.

CALBAYOG CITY, Western Samar – Poet-musician Ericson Acosta asked his eight-year-old son Emannuel what the young boy thought about his incarceration. Instead of a direct answer, Eman said: “Isn’t it that Jose Rizal was also imprisoned?”

“Good,” Acosta said. That was his son’s first visit at the Calbayog Sub-Provincial Jail weeks after Acosta was arrested on February 13 in Bgy. Bay-ang, San Jorge, Samar by elements of the 34th Infantry Battalion (IB) of the Philippine Army. The military publicly branded him as a high-ranking officer of the Communist Party of the Philippines (CPP) in the province and was charged with illegal possession of explosives. It has been almost ten months since. In the days that followed, Eman joined fund-raising activities for the campaign for the release of his father and other political prisoners.

“One time, he distributed Free Ericson Acosta pins to his classmates. When one asked what it was all about, he joked ‘Free. It’s for free.’ Seriously, he even seems proud,” Acosta told Bulatlat.com in an interview inside prison, Dec. 7.

“On his second visit, he played the guitar and sang the songs I wrote,” Acosta said, his eyes shining. The guitar was his birthday gift. “I was told before that he was not using it so I was really surprised when he played it.”

Despite not having eaten anything for the past five days, Acosta’s mind remains lucid. Rehydration fluids have been keeping whatever physical energy is left of him. Visits, letters and support from friends sustain his spirit.

“I have difficulty sleeping. I’m feeling groggy,” Acosta said. He began his hunger strike Dec. 3 and will continue until the eve of Dec. 10, the International Human Rights Day.

“When I rose up from my bed last night, I told my co- inmates, ‘Earthquake!’ They told me, ‘No! That is just hunger.” There are nine other detainees in his cell.

Unlike most detention facilities, the provincial jail is not overcrowded. The designated receiving area is itself a detention cell for women detainees.

There are no multiple-deck beds. Acosta sleeps on a big wooden bed he shares with the other prisoners. In other cells, some prisoners have to sleep on the floor due to lack of facilities. 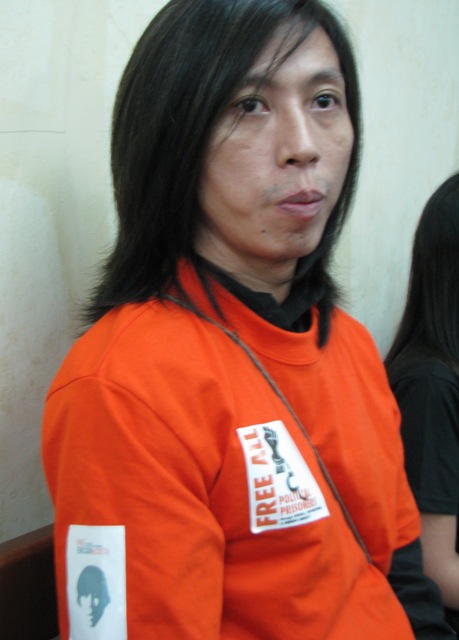 Food is okay but not enough, said Acosta, with only P20 budget for meals of each prisoner. They are given uncooked rice which they themselves cook. They usually have fish but they rarely have vegetables. “Those who have visitors receive additional supply. Those who are not visited by relatives are most unfortunate. They sell their ration of rice to buy coffee and other personal needs,” Acosta said.

“Sometimes, I feel the embarrassment of the rich. I share whatever is given me to other inmates,” Acosta, who has the most visits, said.

Acosta also shares his thoughts to other inmates. It has been their morning habit to discuss the evening’s news, sharing their views on issues. “Most of them resemble persons I know,” he said. Having been a peasant organizer for years, Acosta instinctively discussed problems in society and the cause he is fighting for. Most of the detainees are farmers and workers.

Sometimes, he is requested by his inmates to explain some legal documents. “I would read it aloud. And I’d say, ‘Oh! According to this, you killed this fellow.’ We all laughed,” Acosta, the performer, said.

He drafted the letter of one prisoner who had served his sentence asking for his release. “The poor man’s wife is sick and they have ten children,” said Acosta.

It took time before Acosta adjusted to this new chapter of his life. The first months, he was so angry.

After his arrest, he was subjected to torture and interrogation. For days, he was never allowed to contact his family. When he was finally brought to the court, closely guarded by the soldiers who took him, Acosta never wasted the opportunity to speak. “The colonel then offered his cellular phone. I grabbed it and called my mother. In the middle of our conversation, the colonel took his phone.”

When he was sent to the provincial jail, a platoon of soldiers from the 87th Infantry Battalion camped out beside the detention facility. “They justified their presence by saying they have operations in the area.”

During the first hearing of his case, the soldiers, in camouflage and carrying long firearms, escorted him to the court. Later, the platoon was replaced by a squad from 14th Infantry Battalion.

“I would yell at the soldiers who would go inside the jail to take a peek at me as if I were Lolong the crocodile,” he said. “I asked him, ‘Are you watching over me?’ The soldier said, ‘Why? Are you an artist?”

Later, the jail authorities themselves prevented the soldiers in full battle gear from going inside the jail.

Just last month, while Acosta was talking with Anakpawis Rep. Rafael Mariano and other visitors, two soldiers peeked through the wide window, listening to the conversations. He confronted the soldiers and asked them to go away.

He has learned to temper his anger. On Sept. 21, the schedule of his supposed arraignment, soldiers brandishing long firearms, joined him inside the vehicle. “I controlled my anger. I talked to them, telling them not to follow orders, which violate human rights, from their higher-ups. Some nodded, many others just kept their heads bowed. They probably did not even know me and were just told to follow orders.”

It took time, too, before he became accustomed to speaking in public. “For years, I tried hard to be anonymous. Now, I have to grant interviews,” he said. Acosta said that in the many years of his organizing among the peasants, he did not divulge his identity.

On his first months in detention, Acosta, as a writer, said he suffered not from mental block but from what he called writer’s burst. “I would just write down all my thoughts,” he said, admitting his notes were often without coherence or were incomplete.

“My wife did a good thing. She sent me a copy of Alan Jazmines’s prison diary. If the old man can write, given the tighter security and worse conditions there, I could to and I must write again,” Acosta said. Jazmines is a consultant of the National Democratic Front of the Philippines (NDFP) arrested in February and now detained at the Philippine National Police (PNP) custodial center in Camp Crame, Quezon City.

These past few months, the poet has gone back. His poems posted at the blog his friends put up.

Acosta, the singer, is also alive. His long-time friend, Renato Reyes Jr., secretary general of Bagong Alyansang Makabayan (Bayan), visited him several times. He would sing when Reyes played the guitar. Their recorded sessions have been uploaded in social media networks. Other visitors, especially the youth, would also jam with Acosta. Most of the songs he wrote during his days at the Alay Sining, a cultural group in the University of the Philippines, were never recorded before. The songs are being passed on nevertheless from one generation of activists to another.

He talked about other political prisoners that he knew such as Eduardo Sarmiento and Randy Malayao, asking about their conditions. He said he and Malayao had planned to sing together before the latter left Manila several years ago. Malayao, NDFP consultant, whom Acosta met during his college days, is now detained at the Ilagan Provincial Jail in Isabela.

Like Acosta, hundreds of political prisoners are staging a hunger strike. He noted the silence of President Benigno S. Aquino III on the call to release all political prisoners. This month’s strike is their third coordinated protest action since Aquino assumed the presidency. The first was in July, before Aquino’s second State of the Nation Address. Before the anniversary of martial law, political prisoners and their families also went on fasting. Except for Presidential spokesman Edwin Lacierda’s statement denying the existence of political prisoners, nothing has been heard from Malacanang.

He said the Hernandez political doctrine and the Comprehensive Agreement on Respect for Human Rights and International Humanitarian Law, the historical experience of the country especially during martial law, as well as documents from human rights groups and even the United Nations on political prisoners, can be used as a starting point.

“The problem is that he is not listening,” Acosta said, referring to Aquino.

He said the amnesty given by Aquino’s mother, former President Corazon Aquino, to political prisoners who fought the Marcos dictatorship was not “a declaration from a benevolent leader but a response to the pressure of the mass movement.”

Even inside prison, Acosta and other political detainees continue to exert pressure on the Aquino administration.